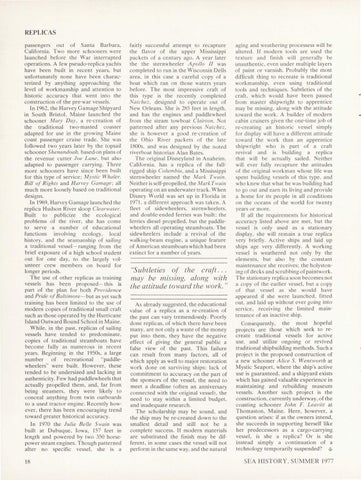 REPLICAS passengers out of Santa Barbara, California. Two more schooners were launched before the War interrupted operations. A few pseudo-replica yachts have been built in recent years, but unfortunately none have been characterized by anything approaching the level of workmanship and attention to historic accuracy that went into the construction of the pre-war vessels. In 1962, the Harvey Gamage Shipyard in South Bristol, Maine launched the schooner Mary Day, a re-creation of the traditional two-masted coaster adapted for use in the growing Ma in e coast passenger cruise trade. She was followed two years later by the topsail schooner Shenandoah, based on plans of the revenue cutter Joe Lane, but also adapted to passenger carrying. Three more schooners have since been built for this type of service; Mystic Whaler, Bill of Rights and Harvey Gamage; all much more loosely based on traditional designs. In 1969, Harvey Gamage launched the replica Hudson River sloop Clearwater. Built to publicize the ecological problems of the river, she has come to serve a number of educational functions involving ecology, local history. and the seamanship of sailing a traditional vessel-ranging from the brief exposure of a high school student out for one day, to the largely volunteer crew members on board for longer periods. The use of other replicas as training vessels has been proposed - this is part of the plan for both Providence and Pride of Baltimore - but as yet suc h training has been limited to the use of modern copies of traditional small craft such as those operated by the Hurricane Island Outward Bound School in Maine. While, in the past, replicas of sailing vessels have tended to predominate, copies of traditional steam boats have become fully as numerous in recent years. Beginning in the 1950s, a large number of recreational &quot;paddlewheelers&quot; were built. However, these tended to be undersized and lacking in a uthenticity. Few had paddlewheels that ac tually propelled them, a nd , far from being steamers, they were likely to conceal anything from twin outboards to a used tractor engine. Recently however, there has been encouraging trend toward greater historical accuracy. In 1970 the Julia Belle Swain was built at Dubuque , Iowa, 157 feet in length and powered by two 350 horsepower steam engines. Though patterned after no specific vessel , she is a 18

fairly successful attempt to recapture the flavor of the upper Mississippi packets of a century ago. A year later the the sternwheeler Apollo fl was completed to run in the Wisconsin Dells area, in this case a careful copy of a boat which ran on those waters years before. The most impressive craft of this type is the recently completed Natchez , designed to operate out of New Orleans. She is 285 feet in length, and has the engines and paddlewheel from the steam towboat Clairton. Not patterned after any previous Natchez, she is however a good re-creation of the Ohio River packets of the late 1800s, and was designed by the noted riverboat historian Alan Bates. The original Disneyland in Anaheim , California , has a replica of the fullrigged ship Columbia, and a Mississippi sternwheeler named the Mark Twain . Neither is self-propelled, the Mark Twain operating on an underwater track. When Disney World was set up in Florida in 1971 , a different approach was taken. A fleet of sidewheelers, sternwheelers, and double-ended ferries was built: the ferries diesel propelled, but the paddlewheelers all operating steamboats. The sidewheelers include a revival of the walking-beam engine, a uni4ue feature of American steamboats which had been extinct for a number of years.

&quot;Subtleties of the craft. may be missing, along with the attitude toward the work.&quot; As already suggested, the educational value of a replica as a re-creation of the past can vary tremendously. Poorly done replicas, of which there have been many, are not only a waste of the money put into them, they have the negative effect of giving the general public a false view of the past. This failure can result from many factors, all of which apply as well to major restoration work done on surviving ships: lack of commitment to accuracy on the part of the sponsors of the vessel, the need to meet a deadline (often an anniversary connected with the original vessel), the need to stay within a limited budget, and inadequate research. The scholarship may be sound , and the ship may be re-created down to the smallest detail and still not be a complete success. If modern materials are substituted the finish may be different , in some cases the vessel will not perform in the same way, and the natural

aging and weathering processess will be altered. If modern tools are used the texture and finish will generally be unauthentic, even under multiple layers of paint or varnish. Probably the most difficult thing to recreate is traditional workmanship, even using traditional tools and techniques. Subtleties of the craft, which would have been passed from master shipwright to apprentice may be missing, along with the attitude toward the work. A builder of modern cabin cruisers given the one-time job of re-creating an historic vessel simply for display will have a different attitude toward the work than an apprentice shipwright who is part of a craft revival and is building a replica that will be actually sailed. Neither will ever fully recapture the attitudes of the original workman whose life was spent building vessels of this type, and who knew that what he was building had to go out and earn its living and provide a home for its people in all conditions on the oceans of the world for twenty years or more. If all the requirements for historical accuracy listed above are met, but the vessel is only used as a stationary display, she will remain a true replica very briefly. Active ships and laid up ships age very differently. A working vessel is weathered not only by the elements, but also by the constant maintenance she receives; the holystoning of decks and scrubbing of paintwork. The stationary replica soon becomes not a copy of the earlier vessel , but a copy of that vessel as she would have appeared if she were launched , fitted out, and laid up without ever going into service, receiving the limited maintenance of an inactive ship. Consequently, the most hopeful projects are those which seek to recreate traditional vessels for active use, and utilize ongoing or revived traditional shipbuilding methods. Such a project is the proposed construction of a new schooner Alice S. Wentworth at Mystic Seaport, where the ship&#39;s active use is guaranteed, and a shipyard exists which has gained valuable experience in maintaining and rebuilding museum vessels. Another such project is the construction , currently underway, of the coasting schooner John F. Leavitt at Thomaston, Maine. Here, however, a question arises: if as the owners intend, she succeeds in supporting herself like her predecessors as a cargo-carrying vessel, is she a replica? Or is she instead simply a continuation of a technology temporarily suspended? .t