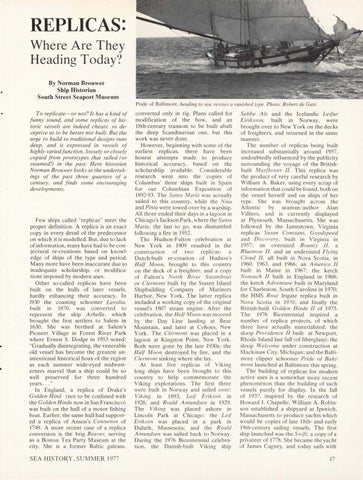 To replicate-or not? It has a kind of funny sound, and some replicas of historic vessels are indeed cheats: so deceptive as to be better not built. But the urge to build to traditional designs runs deep, and is expressed in vessels of highly varied function, loosely or closely copied from prototypes that sailed (or steamed!) in the past. Here historian Norman Brouwer looks at the undertakings of the past three quarters of a century, and finds some encouraging developments.

Few ships called &quot; replicas&quot; meet the proper definition. A replica is an exact copy in every detail of the predecessor on which it is modelled. But, due to lack of in format ion, many have had to be conjectural re-creations based on knowledge of ships of the type and period. Many more have been inaccurate due to inadequate scholarship , or modifications imposed by modern uses. Other so-called replicas have been built on the hulls of later vessels, hardly enhancing their accuracy. In 1930 the coasting schooner Lavolta, built in 1870, was converted to represent the ship Arbella , which brought the first settlers to Salem in 1630. She was berthed at Salem&#39;s Pioneer Village in Forest River Park where Ernest S. Dodge in 1953 noted: &quot;Gradually disintegrating, the venerable old vessel has become the greatest unintentional historical hoax of the region as each summer wide-eyed midwesterners marvel that a sh ip could be so well preserved for three hundred years .. . &quot; In England, a replica of Drake&#39;s Golden Hind (not to be confused with the Golden Hinde now in San Francisco) was built o n the hull of a motor fis hing boat. Earlier, the same hull had supp orted a replica of Anson&#39;s Centurion of 1749. A more recent case of a replica conversion is the brig Beaver, serving as a Boston Tea Party M useum at the c ity. She is a former Baltic galeass ,

converted only in rig. Plans called for modification of the bow, and an 18th-century transom to be built abaft the deep Scandinavian one , but this work was never done. However, beginning with some of the earliest replicas, there have been honest attempts made to produce historical acc uracy, based on the scholarshlip available. Considerable research went into the copies of Columbus&#39; three ships built in Spain for our Columbian Exposition of 1892-93. The Santa Maria was actually sailed to this country , while the Nina and Pinta were towed over by a warship. All three ended their days in a lagoon in Chicago&#39;s Jackson Park , where the Santa Maria , the last to go, was dismantled following a fire in 1952. The Hudson-Fulton celebration at New York in 1909 resulted in the construction of two replicas: a Dutch-built re-creation of Hudson &#39;s Half Moon, brought to this country on the deck of a freighter , and a copy of Fulton&#39;s North River Steamboat or Clermont built by the Staten Island Shipbuilding Company of Mariners Harbor, New York. The latter rep lica included a working copy of the original vessel &#39;s 1807 steam engin e. After the celebration , the Half Moon was moored by the Day Line landing at Bear Mountain, and later at Cohoes, New York. The Clermont was placed in a lagoon at Kingston Point, New York . Both were gone by the late 1930s ; the Half Moon destroyed by fire, and the Clermont sinking where she lay. At least five replicas of Viking long ships have been brought to this country to help commemorate the Viking explorations . The first three were built in Norway and sailed over: Viking in 1893, Leif Erikson in 1926, and Roald Amundsen in 1929. The Viking was placed ashore in Lincoln Park at Chicago ; the Leif Erikson was placed in a park in Duluth , Minnesota; and the Roald Amundsen was sai led back to Norway . During the 1976 Bicentennial celebration , the Danish-built Viking ship

Sebbe Als and the Icelandic Le1fur Eiriksson, bu ilt in Norway, were brought over to New York on the decks of freighters, and returned in the same manner. The number of replicas being built increased substantially around 1957, undoubtedly influenced by the publicity surrounding the voyage of the Britishbuilt Mayflower II. This replica was the product of very carefu l research by William A . Baker, using every scrap of information that could be found, both on the vessel herself and on ships of her type. She was brought across the Atlantic by seaman/ author Alan Villiers, and is currently displayed at Plymouth , Massachusetts. She was fo llowed by the Jamestown, Virginia replicas Susan Constant, Goodspeed and Disco very, built in Virginia in 1957; an oversized Bounty 11, a Bluenose II, and an undersized Flying Cloud II, all built in Nova Scotia , in 1960, 1963, and 1966; an America II built in Maine in 1967 ; the ketch Non such II built in England in 1968; the ketch Adventure built in Maryland for Charleston , South Carolina in 1970; the HMS Rose frigate replica built in Nova Scotia in 1970; and finally the British-built Golden Hinde II of 1973. The 1976 Bicentennial inspired a number of replica projects, of which three have actuall y materialized ; the sloop Pro vidence 11 built at Newport, Rhode Island last fall (of fiberglass) ; the sloop Welcome under construction at Mackinaw City , Michigan: and the Baltimore clipper schooner Pride of Baltimore launched at Baltimore this spring. The building of replicas for modern active uses is a somewhat more recent phenomenon than the building of such vessels purely for display. In the fa ll of 1937, inspired by the research of Howard I. Chapelle , Wi lliam A. Robinson established a shipyard at Ipswich , Massachusetts to produce yachts which would be copies of late 18th- and early 19th-century sailing vessels. The first ship launched was the Swift, a copy of a privateer of 1778. She became the yacht of James Cagney, and today sails with 17