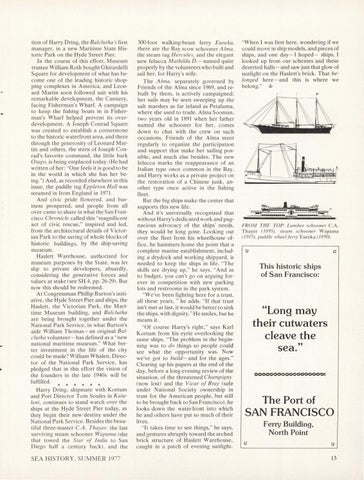 tion of Harry Dring, the Balclutha&#39;s first manager, in a new Maritime State Historic Park on the Hyde Street Pier. In the course of this effort, Museum trustee William Roth bought G hirardelli Square for development of what has become one of the leading historic shopping complexes in America, and Leonard Mar.tin soon followed suit with his remarkable development, the Cannery, facing Fisherman&#39;s Wharf. A campaign to keep the fishing boats in in Fisherman·s Wharf helped prevent its overdevelopment. A Joseph Conrad Square was created to establish a cornerstone to the historic waterfront area, and there through the generosity of Leonard Martin and others, the stern of Joseph Conrad&#39;s favorite command, the little bark Otago, is being emplaced today. (He had written of her: &quot;One feels it is good to be in the world in which· she has her being. &quot;) And , as recorded elsewhere in this issue, the paddle tug Eppleton Hall was steamed in from England in 1971. And civic pride flowered, and business prospered , and people from all over came to share in what the San Francisco Chronicle called this &quot; magnificent act of civic rescue,&quot; inspired and led , from the architectural details of Victorian Park to the saving of whole blocks of historic buildings, by the ship-saving museum. Haslett Warehouse, authorized for museum purposes by the State, was let slip to private developers, absurdly, considering the generative forces and values at stake (see SH 4, pp. 26-29). But now this should be redeemed. At Congressman Phillip Burton&#39;s initiative, the Hyde Street Pier and ships, the Haslett, the Victorian Park, the Maritime Museum building, and Balclutha are being brought together under the National Park Service, in what Burton&#39;s aide William Thomas-an origina l Balclutha volun teer- has defined as a &quot;new national maritime museum. &quot; What better investment in the life of the city could be made? William Whalen , Director of the National Park Service , has pledged that in this effort the vision of the founders in the late 1940s will be fulfilled. * * * * * * Harry Dring, shipmate with Kortum and Port Director Tom Sou les in Kaiulani, continues to stand watch over the ships at the Hyde Street Pier today, as they begin their new·destiny under the ational Park Service. Besides the beautiful three-master C.A. Thay er, the last surviving steam schooner Wapama (she that towed the Star of India to San Diego half a century back) , and the

300-foot walking-beam ferry Eureka, there are the Bay scow schooner A Ima , the steam tug Hercules, and the elegant new felucca Mathilda D. - named quite properly by the volunteers who built and sail her, for Harry&#39;s wife. The Alma, separately governed by Friends of the Alma since 1969, and rebuilt by them, is actively campaigned; her sails may be seen sweeping up the salt marshes as far inland as Petaluma , where she used to trade. Alma Sooman, two years old in 1891 when her father named the schooner for her, comes down to chat with the crew on such occasions. Friends of the Alma meet regularly to organize the participation and support that make her sailing possible, and much else besides. The new felucca marks the reappearance of an Italian type once common in the Bay , and Harry works as a private project on the restoration of a Chinese junk, another type once active in the fishing fleet. But the big ships make the center that supports this new life. And it&#39;s universally recognized that without Harry&#39;s dedicated work and pugnacious advocacy of the sh ips&#39; needs, they would be long gone. Looking out over the fleet from his wheelhouse office, he hammers home the point that a complete marine establishment, including a drydock and working shipyard, is needed to keep the ships in life. &quot;The skills are drying up,&quot; he says. &quot;And as to budget, you can &#39;t go on arguing forever in competition with new parking lots and restrooms in the park system. &quot;We&#39;ve been fighting here for a trust, all these years, &quot; he adds. &quot;If that trust isn&#39;t met at last, it would be better to sink the ships, with dignity.&quot; He smiles , but he means it. &quot;Of course Harry&#39;s right,&quot; says Karl Kortum from his eyrie overlooking the same ships. &quot;The problem in the beginning was to do things so people could see what the opportunity was. Now we&#39;ve got to build-and for the ages.&quot; Clearing up his papers at the end of the day, before a long evening review of the situation, of the threatened Champigny (now lost) and the Vicar of Bray (safe under National Society ownership in trust for the American people, but still to be brought back to San Francisco), he looks down the waterfront into which he and others have put so much of their lives. &quot;It takes time to see things,&quot; he says, and gestures abruptly toward the arched brick structure of Haslett Warehouse, caught in a patch of evening sunlight.

&quot;When I was first here, wondering if we could move in ship models, and pieces of ships, and one day-I hoped- ships, I looked up from our schemes and these deserted halls-and saw just that glow of sunlight on the Haslett&#39;s brick. That belonged here-and this is where we belong.&quot; .t

This historic ships of San Francisco:

their cutwaters cleave the sea. &quot;