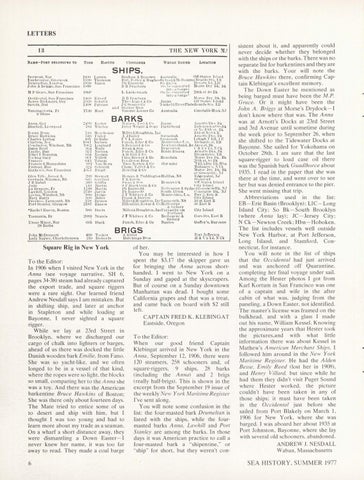 Square Rig in New York To the Editor: In 1906 when I visited New York in the Anna (see voyage narrative , SH 6, pages 34-38) steam had already captured the export trade, and square riggers were a rare sight. Our learned friend Andrew Nesdall says I am mistaken . But in shifting ship, and later at anchor in Stapleton and while loading at Bayonne, I never sighted a square rigger. While we lay at 23rd Street in Brooklyn, where we discharged our cargo of chalk into lighters or barges, ahead of us there was docked the little Danish wooden bark Emilie, from Fano. She was so yacht-like, and we often longed to be in a vessel of that kind , where the ropes were so light. the blocks so small, comparing her to the Anna she was a toy. And there was the American barkentine Bruce Hawkins of Boston; She was there only about fourteen days. The Mate tried to entice some of us to desert and ship with him , but I thought I was too young and had to learn more about my trade as a seaman. On a wharf a short distance away, they were dismantling a Down Easter- I never knew her name, it was too far away to read . They made a coal barge

of her. You may be interested in how I spent the ~3.17 the skipper gave us for bringing the Anna across shorthanded. I went to New York on a Sunday and gaped at the skyscrapers. But of course on a Sunday downtown Manhattan was dead. I bought some California grapes and that was a treat, and came back on board with 52 still le ft. CAPTAIN FRED K. KLEBINGAT Eastside, Oregon To the Editor: When our good friend Captain Klebingat arrived in New York in the Anna, September 12, 1906, there were 120 steamers, 258 schooners and, of square-riggers, 9 ships, 28 barks (including the Anna) and 2 brigs (really half-brigs) . This is shown in the excerpt from the September 19 issue of the weekly Ne\\&#39; York MaritimeRef{ister l &#39;ve sent along. You will note some confusion in the list: the four-masted bark Drumeltan is listed with the ships, while the fourmasted barks Anna, Laivhill and Port Stanley are among the barks. In those days it was American practice to call a four-masted bark a &quot;shipentine,&quot; or &quot;ship&quot; for short , but they weren&#39;t con-

sistent about it, and apparently could never decide whether they belonged with the ships or the barks. There was no separate list for barkentines and they are with the barks. Your will note the Bruce Hawkins there, confirming Captain Klebingat&#39;s excellent memory. The Down Easter he mentioned as being barged must have been the M.P. Grace. Or it might have been the John A. Briggs at Morse&#39;s Drydock - 1 don&#39;t know where that was. The Anna was at Arnott&#39;s Doc ks at 23rd Street and 3rd A venue until sometime during the week prior to September 26, when she shifted to th e Tidewater Docks at Bayonne. She sailed for Yokohama on October 28th. I am sure that the last square-rigger to load case oil there was the Spanish bark Guadlhorce about 1935. I read in the paper that she was there at the time , and went over to see her but was denied entrance to the pier. She went missing that trip. Abbreviations used in the list: EB-Erie Basin (Brooklyn); UC - Long Island City; So Bk -South Brooklyn (where Anna lay) ; JC - Jersey City; N Ck-Newton Creek; Hbn -Hobo ken. The list includes vessels well outside New York Harbor, at Port Jefferson , Long Island , and Stamford, Connecticut, for instance. You will note in the list of ships that the Occidental had just arrived and was anchored off Quarantine, completing her final voyage under sail. Among the Hester photos I got from Karl Kortum in San Francisco was one of a captain and wife in the after cabin of what was, judging from the paneling, a Down Easter, not identified. The master&#39;s license was framed on the bulkhead , and with a glass I made out his nam e, William Kessel. Knowin g the approximate years that Hester took the pic tures ,a nd with what little information there was about Kessel in Mathew&#39;s American Merchant Ships, I followed him around in the New York Maritime Register. He had the Alden B esse, Emily Reed (lost her in 1908) , and Henry Villard, but since while he had th e m they didn &#39;t visit Puge t Sound where Hester worked, the picture couldn&#39;t have been taken in any of those ships; it must have been taken in the Occidental just before she sailed from Port Blakely on March l, 1906 for New York, where she was barged . I was aboard her about 1935 at Port Johnston, Bayonne , where she lay with several old schooners, abandoned. ANDREW J. NESDALL Waban, Massac husetts