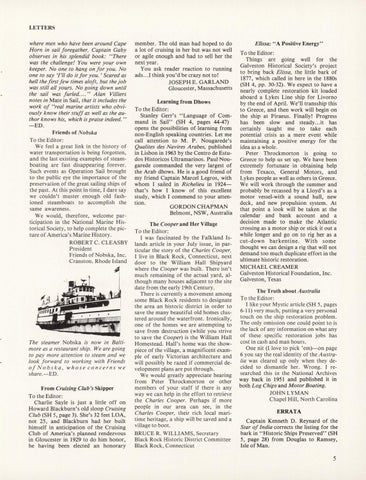 where men who have been around Cape Horn in sail foregather. Captain Gaby observes in his splendid book: "There was the challenge! You were your own keeper. No one to hang on for you. No one to say 'I'll do it for you. ' Scared as hell the first few times aloft, but the job was still all yours. No going down until the sail was furled .. .. " Alan Villiers notes in Mate in Sail, that it includes the work of "real marine artists who obviously know their stuff as well as the author knows his, which is praise indeed. " -ED. Friends of Nobska To the Editor: We feel a great link in the history of water transportation is being forgotten, and the last existing examples of steamboating are fast disappearing forever. Such events as Operation Sail brought to the public eye the importance of the preservation of the great sailing ships of the past. At this point in time, I dare say we couldn't muster enough old fashioned steamboats to accomplish the same awareness. We would, therefore, welcome participation in the National Marine Historical Society, to help complete the picture of America's Marine History. ROBERT C. CLEASBY President Friends of Nobska, Inc. Cranston. Rhode Island

The steamer Nobska is now in Baltimore as a restaurant ship. We are going to pay more attention to steam and we look forward to working with Friends of Nobska, whose concerns we share.-ED. From Cruising Club's Skipper To the Editor: Charlie Sayle is just a little off on Howard Blackburn's old sloop Cruising Club (SH 5, page 3). She's 32 feet LOA, not 25, and Blackburn had her built himself in anticipation of the Cruising Club of America's planned rendezvous in Gloucester in 1929 to do him honor, he having been elected an honorary

member. The old man had hoped to do a lot of cruising in her but was not well or agile enough and had to sell her the next year. You ask reader reaction to running ads ... I think you'd be crazy not to! JOSEPH E. GARLAND Gloucester, Massachusetts Learning from Dhows To the Editor: Stanley Gerr's "Language of Command in Sail" (SH 4, pages 44-47) opens the possibilities of learning from non-English speaking countries. Let me call attention to M. P. Nougarede's Qua/ites des Navires Arabes, published in Lisbon in 1963 by the Centro de Estudos Historicos Ultramarinos. Paul Nougarede commanded the very largest of the Arab dhows. He is a good friend of my friend Captain Marcel Legros, with whom I sailed in Richelieu in 1924that's how I know of this excellent study, which I commend to your attention. GORDON CHAPMAN Belmont, NSW, Australia The Cooper and Her Village To the Editor: I was fascinated by the Falkland Islands article in your July issue, in particular the story of the Charles Cooper. I live in Black Rock, Connecticut, next door to the William Hall Shipyard where the Cooper was built. There isn't much remaining of the actual yard, although many houses adjacent to the site date from the early 19th Century. There is currently a movement among some Black Rock residents to designate the area an historic district in order to save the many beautiful old homes clustered around the waterfront. Ironically, one of the homes we are attempting to save from destruction (while you strive to save the Cooper) is the William Hall Homestead. Hall's home was the showpiece of the village, a magnificent example of early Victorian architecture and will possibly be razed if commercial development plans are put through. We would greatly appreciate hearing from Peter Throckmorton or other members of your staff if there is any way we can help in the effort to retrieve the Charles Cooper. Perhaps if more people in our area can see, in the Charles Cooper, their rich local maritime heritage, a ship will be saved and a village to boot. BRUCE R. WILLIAMS, Secretary Black Rock Historic District Committee Black Rock, Connecticut

Elissa: "A Positive Energy" To the Editor: Things are going well for the Galveston Historical Society's project to bring back Elissa, the little bark of 1877, which called in here in the 1880s (SH 4, pp. 30-32). We expect to have a nearly complete restoration kit loaded aboard a Lykes Line ship for Livorno by the end of April. We'll transship this to Greece, and then work will begin on the ship at Piraeus. Finally! Progress has been slow and steady .. .it has certainly taught me to take each potential crisis as a mere event while maintaining a positive energy for the idea as a whole. Peter Throckmorton is going to Greece to help us set up. We have been extremely fortunate in obtaining help from Texaco, General Motors, and Lykes people as well as others in Greece. We will work through the summer and probably be recassed by a Lloyd's as a motor vessel-with a sound hull, new deck, and new propulsion system. At that point a look will be taken at the calendar and bank account and a decision made to make the Atlantic crossing as a motor ship or stick it out a while longer and go on to rig her as a cut-down barkentine. With some thought we can design a rig that will not demand too much duplicate effort in the ultimate historic restoration. MICHAEL CREAMER Galveston Historical Foundation, Inc. Galveston, Texas The Truth about Australia To the Editor: I like your Mystic article (SH 5, pages 6-11) very much, putting a very personal touch on the ship restoration problem. The only omission one could point to is the lack of any information on what any of these specific restoration jobs has cost in cash and man hours. One nit (I love to pick 'em)-on page 6 you say the real identity of the Australia was cleared up only when they decided to dismantle her. Wrong. I researched this in the National Archives way back in 1951 and published it in both Log Chips and Motor Boating. JOHN LYMAN Chapel Hill, North Carolina ERRATA Captain Kenneth D. Reynard of the Star of India corrects the listing for the bark in "Historic Ships Preserved" (SH 5, page 28) from Douglas to Ramsey, Isle of Man.