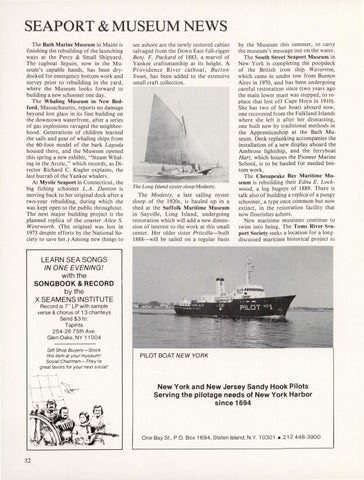 SEAPORT &amp; MUSEUM NEWS The Bath Marine Museum in Maine is finishing the rebuilding of the launching ways at the Percy &amp; Small Shipyard. The tugboat Seguin, now in the Museum&#39;s capable hands, has been drydocked for emergency bottom work and survey prior to rebuilding in the yard , where the Museum looks forward to building a new schooner one day. The Whaling Museum in New Bedford , Massachusetts, reports no damage beyond lost glass in its fine building on the downtown waterfront, after a series of gas explosions ravaged the neighborhood . Generations of children learned the sails and gear of whaling ships from the 60-foot model of the bark Lagoda housed there, and the Museum opened this spring a new exhibit, &quot;Steam Whaling in the Arctic,&quot; which records, as Director Richard C. Kugler explains, the last hurrah of the Yankee whalers. At Mystic Seaport in Connecticut, the big fishin g schooner L.A . Dunton is moving back to her original dock after a two-year rebuilding, during which she was kept open to the public throughout. The next major building project is the planned replica of the coaster Alice S. Wentworth. (The original was lost in 1973 despite efforts by the National Society to save her.) Among new things to

see ashore are the newly restored cabins salvaged from the Down East full-rigger Ben). F. Packard of 1883 , a marvel of Yankee craftsmanship at its height. A Providence River catboat, Button Swan, has been added to the extensive small craft collection.

The Modesty, a late sailing oyster sloop of the 1920s, is hauled up in a shed at the Suffolk Maritime Museum in Sayville, Long Island, undergoing restoration which will add a new dimension of interest to the work at this small center. Her older sister Priscilla-built 1888-will be sailed on a regular basis

by the Museum this summer, to carry the museum&#39;s message out on the water. The South Street Seaport Museum in New York is co_mpleting the poopdeck of the British iron ship Wavertree, which came in under tow from Buenos Aires in 1970, and has been undergoing careful restoration since (two years ago the main lower mast was stepped, to replace that lost off Cape Horn in 1910). She has two of her boats aboard now, one recovered from the Falkland Islands where she left it after her dismasting, one built new by traditional methods in the Apprenticeshop at the Bath Museum. Deck replanking accompanies the installation of a new display aboard the Ambrose lightship, and the ferryboat Hart, which houses the Pioneer Marine School, is to be hauled for needed bottom work. The Chesapeake Bay Maritime Museum is rebuilding their Edna E. Lockwood, a log bugeye of 1889. There is talk also of building a replica of a pungy schooner, a type once common but now extinct, in the restoration facility that now flourishes ashore. New maritime museums continue to swim into being. The Toms River Seaport Society seeks a location for a longdiscussed maritime historical project in

LEARN SEA SONGS IN ONE EVENING! with the SONGBOOK &amp; RECORD by the X SEAM ENS INSTITUTE Record is 7&quot; LP with sample verse &amp; chorus of 1 3 chanteys Send $3 to : Tapinta 254-26 75th Ave . Glen Oaks , NY 11 004 Gift Shop Buyers-Stock this item at your museum! Social Chairmen-They &#39;re great favors for your next social!