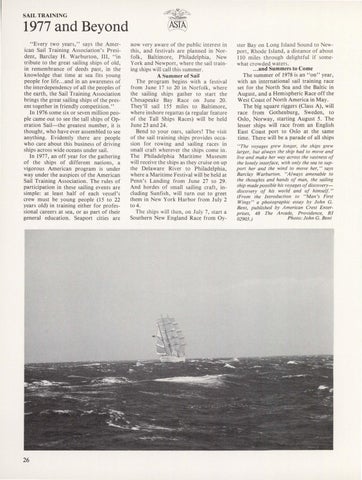 1977 and Beyond "Every two years," says the American Sail Training Association's President, Barclay H. Warburton, III, "in tribute to the great sailing ships of old , in remembrance of deeds past, in the knowledge that time at sea fits young people for life ... and in an awareness of the interdependency of all the peoples of the earth, the Sail Training Association brings the great sailing ships of the present together in friendly competition." In 1976 some six or seven million people came out to see the tall ships of Operation Sail-the greatest number, it is thought, who have ever assembled to see anything. Evidently there are people who care about this business of driving ships across wide oceans under sail. In 1977 , an off year for the gathering of the ships of different nations, a vigorous American program is under way under the auspices of the American Sail Training Association. The rules of participation in these sai ling events are si mple: at least half of each vessel' s crew must be young people (15 to 22 years old) in training either for professional careers at sea, or as part of their general education. Seaport cities are

now very aware of the public interest in this, and festivals are planned in Norfolk, Baltimore, Philadelphia, New York and Newport, where the sail training ships will call this summer. A Summer of Sail The program begins with a festival from June 17 to 20 in Norfolk, where the sailing ships gather to start the Chesapeake Bay Race on June 20. They'll sail 155 miles to Baltimore, where inshore regattas (a regular feature of the Tall Ships Races) will be held June 23 and 24. Bend to your oars, sailors! The visit of the sai l training ships provides occasion for rowing and sailing races in small craft wherever the ships come in. The Philadelphia Maritime Museum will receive the ships as they cruise on up the Delaware River to Philadelphia, where a Maritime Festival will be held at Penn's Landing from June 27 to 29. And hordes of small sailing craft, includi ng Sunfish, will turn out to greet them in New York Harbor from July 2 to 4. The ships will then, on July 7, start a Southern New England Race from Oy-

ster Bay on Long Island Sound to Newport, Rhode Island, a distance of about 110 miles through delightful if somewhat crowded waters . . . .and Summers to Come The summer of 1978 is an "on" year, with an international sail training race set for the North Sea and the Baltic in August, and a Hemispheric Race off the West Coast of North America in May. The big square riggers (Class A), will race from Gothenburg, Sweden, to Oslo, Norway, starting August 5. The lesser ships will race from an English East Coast port to Oslo at the same time. There will be a parade of all ships "The voyages grew longer, the ships grew larger, but always the ship had to move and live and make her way across the vastness of the lonely interface, with only the sea to support her and the wind to move her, " says Barclay Warburton. "A lways amenable to the thoughts and hands of man, the sailing ship made possible his voyages of discoverydiscovery of his world and of himself." (From the Introduction to "Man's First Wings" a photographic essay by John G. Bent, published by American Crest Enterprises, 48 The Arcade, Providence, RI 02903.) Photo: John G. Bent