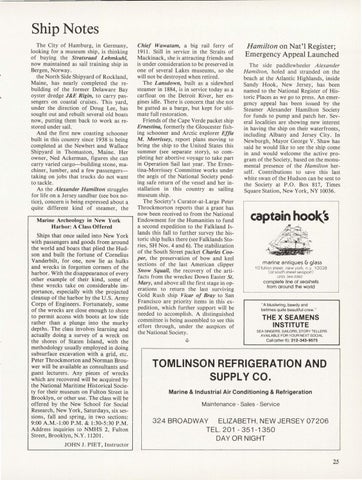 Ship Notes The City of Hamburg, in Germany, looking for a museum ship , is thinking of buying the Stratsraad Lehmkuhl, now maintained as sail training ship in Bergen, Norway . the North Side Shipyard of Rockland, Maine, has nearly completed the rebuilding of the former Delaware Bay oyster dredge J&amp;E Rigin, to carry passengers on coastal cruises. This yard, under the direction of Doug Lee, has sought out and rebuilt several old boats now, putting them back to work as restored under sail. And the first new coasting schooner built in this country since 1938 is being completed at the Newbert and Wallace Shipyard in Thomaston, Maine. Her owner, Ned Ackerman, figures she can carry varied cargo-building stone, machiner, lumber, and a few passengerstaking on jobs that trucks do not want to tackle. As the Alexander HamiltonÂˇ struggles for life on a Jersey sandbar (see box notice), concern is being expressed about a quite different kind of steamer, the Marine Archeology in New York Harbor: A Class Offered Ships that once sailed into New York with passengers and goods from around the world and boats that plied the Hudson and built the fortune of Cornelius Vanderbilt, for one, now lie as hulks and wrecks in forgotten corners of the harbor. With the disappearance of every other example of their kind, some of these wrecks take on considerable importance, especially with the projected cleanup of the harbor by the U.S. Army Corps of Engineers. Fortunately, some of the wrecks are close enough to shore to permit access with boots at low tide rather than a plunge into the murky depths . The class involves learning and actually doing a survey of a wreck on the shores of Staten Island, with the methodology usually employed in doing subsurface excavation with a grid, etc. Peter Throckmorton and Norman Brouwer will be available as consultants and guest lecturers . Any pieces of wrecks which are recovered will be acquired by the National Maritime Historical Society for their museum on Fulton Street in Brooklyn, or other use. The class will be offered by the New School for Social Research, New York, Saturdays, six sessions, fall and spring, in two sections: 9:00 A.M.-1 :00 P.M. &amp; 1:30-5:30 P .M. Address inquiries to NMHS 2, Fulton Street, Brooklyn, N.Y. 11201.

Chief Wawatam, a big rail ferry of 1911. Still in service in the Straits of Mackinack , she is attracting friends and is under consideration to be preserved in one of several Lakes museums, so she will not be destroyed when retired. The Lansdown, built as a sidewheel steamer in 1884, is in service today as a carfloat on the Detroit River, her engines idle. There is concern that she not be gutted as a barge, but kept for ultimate full restoration . Friends of the Cape Verde packet ship Ernestina, formerly the Gloucester fishing schooner and Arctic explorer Effie M. Morrissey, report plans moving to bring the ship to the United States this summer (see separate story), so completing her abortive voyage to take part in Operation Sail last year. The Ernestina-Morrissey Committee works under the aegis of the National Society pending safe return of the vessel and her installation in this country as sailing museum ship. The Society&#39;s Curator-at-Large Peter Throckmorton reports that a grant has now been received to from the National Endowment for the Humanities to fund a second expedition to the Falkland Islands this fall to further survey the historic ship hulks there (see Falklands Stories, SH Nos . 4 and 6). The stabilization of the South Street packet Charles Cooper, the preservation of bow and keel sections of the last American clipper Snow Squall, the recovery of the artifacts from the wreckec Down Easter St. Mary, and above all the first stage in operations to return the last surviving Gold Rush ship Vicar of Bray to San Francisco are priority items in this expedition, which further support will be needed to accomplish. A distinguished committee is being assembled to see this effort through, under the auspices of the National Society.

Hamilton on Nat&#39;l Register; Emergency Appeal Launched The side paddlewheeler A lexander Hamilton, holed and stranded on the beach at the Atlantic Highlands, inside Sandy Hook, New Jersey, has been named to the National Register of Historic Places as we go to press . An emergency appeal has been issued by the Steamer Alexander Hamilton Society for funds to pump and patch her. Several localities are showing new interest in having the ship on their waterfronts, including Albany and Jersey City. In Newburgh, Mayor George V. Shaw has said he would like to see the ship come in and would welcome the active program of the Society, based on the monumental presence of the Hamilton herself. Contributions to save this last white swan of the Hudson can be sent to the Society at P .0. Box 817, Times Square Station, New York, NY 10036.

complete line of seashells from around the world

&quot; A blustering, bawdy and betimes quite beautiful crew .&quot;