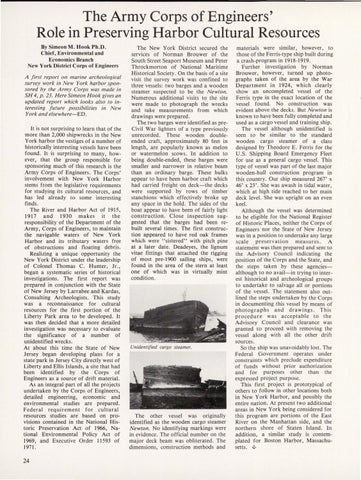 A first report on marine archeologica/ survey work in New York harbor sponsored by the Army Corps was made in SH 4, p. 23. Here Simeon Hook gives an updated report which looks also to interesting future possibilities in New York and elsewhere-ED. It is not surprising to learn that of the more than 2,000 shipwrecks in the New York harbor the vestiges of a number of historically interesting vessels have been found . It is surprising to many, however, that the group responsible for sponsoring much of this research is the Army Corps of Engineers. The Corps&#39; involvement with New York Harbor stems from the legislative requirements for studying its cultural resources, and has led already to some interesting finds. The River and Harbor Act of 1915 , 1917 and 1930 makes it the responsibility of the Department of the Army, Corps of Engineers, to maintain the navigable waters of New York Harbor and its tributary waters free of obstructions and floating debris. Realizing a unique opportunity the New York District under the leadership of Colonel Thomas C. Hunter, Jr., began a systematic series of historical investigations. The first report was prepared in conjunction with the State of New Jersey by Larrabee and Kardas , Consulting Archeologists . This study was a reconnaissance for cultural resources for the first portion of the Liberty Park area to be developed. It was then decided that a more detailed investigation was necessary to evaluate the significance of a number of unidentified wrecks. At about this time the State of New Jersey began developing plans for a state park in Jersey City directly west of Liberty and Ellis Islands, a site that had been identified by the Corps of Engineers as a source of drift material. As an integral part of all the projects undertaken by the Corps of Engineers, detailed engineering, economic and environmental studies are prepared. Federal requirement for cultural resources studies are based on provisions contained in the National Historic Preservation Act of 1966, National Environmental Policy Act of 1969, and Executive Order 11593 of 1971.

The New York District secured the services of Norman Brouwer of the South Street Seaport Museum and Peter Throckmorton of National Maritime Historical Society. On the basis of a site visit the survey work was confined to three vessels: two barges and a wooden steamer suspected to be the Newton. Numerous additional visits to the site were made to photograph the wrecks and take measurements from which drawings were prepared. The two barges were identified as preCivil War lighters of a type previously unrecorded. These wooden doubleerided craft, approximately 80 feet in length, are popularly known as melon or watermelon scows. In addition to being double-ended, these barges were smaller and narrower in relative beam than an ordinary barge. These hulks appear to have been harbor craft which had carried freight on deck-the decks were supported by rows of timber stanchions which effectively broke up any space in the hold. The sides of the boat appear to have been of fairly light construction. Close inspection suggested that the barges had been rebuilt several times. The first construction appeared to have red oak frames which were &quot;sistered&quot; with pitch pine at a later date. Deadeyes, the lignum vitae fittings that attached the rigging of most pre-1900 sailing ships, were found in the area of the stern at least one of which was in virtually mint condition.

The other vessel was originally identified as the wooden cargo steamer Newton. No identifying markings were in evidence. The official number on the major deck beam was obliterated. The dimensions, construction methods and

materials were similar, however, to those of the Ferris-type ship built during a crash-program in 1918-1919. Further investigation by Norman Brouwer, however, turned up photographs taken of the area by the War Department in 1924, which clearly show an uncompleted vessel of the Ferris type in the exact location of the vessel found. No construction was evident above the decks. But Newton is known to have been fully completed and used as a cargo vessel and training ship. The vessel although unidentified is seen to be similar to the standard wooden cargo steamer of a class designed by Theodore E. Ferris for the U.S. Shipping Board Emergency Fleet for use as a general cargo vessel. This type of vessel was part of the last major wooden- hull construction program in this country. Our ship measured 267&#39; x 46&#39; x 23&#39;. She was awash in tidal water, which at high tide reached to her main deck level. She was upright on an even keel. Although the vessel was determined to be eligible for the National Register of Historic Places, neither the Corps of Engineers nor the State of New Jersey was in a position to undertake any large scale preservation measures. A statement was then prepared and sent to the Advisory Council indicating the position of the Corps and the State, and the steps taken by these agenciesalthough to no avail-in trying to interest historical and archeological groups to undertake to salvage all or portions of the vessel. The statement also outlined the steps undertaken by the Corps in documenting this vessel by means of photographs and drawings. This procedure was acceptable to the Advisory Council and clearance was granted to proceed with removing the vessel along with all the other drift sources. So the ship was unavoidably lost. The Federal Government operates under constrai nts which preclude expenditure of funds without prior authorization and for purposes other than the expressed project purpose. This first project is prototypical of others to follow in other locations both in New York Harbor, and possibly the entire nation. At present two additional areas in New York being considered for this program are portions of the East River on the Manhattan side, and the northern shore of Staten Island. In addition, a similar study is contemplated for Boston Harbor, Massachusetts. .t