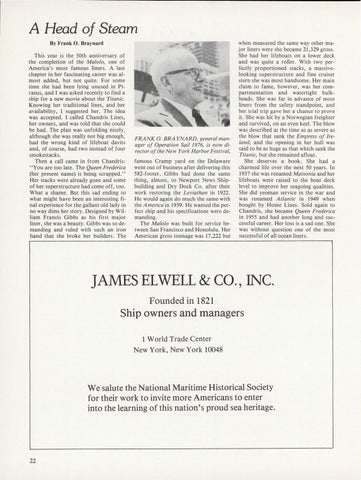 A Head of Steam By Frank 0. Braynard

This year is the 50th anniversary of the completion of the Maiolo, one of America&#39;s most famous liners. A last chapter in her fascinating career was almost added, but not quite. For some time she had been lying unused in Piraeus, and I was asked recently to find a ship for a new movie about the Titanic. Knowing her traditional lines, and her availability, I suggested her. The idea was accepted. I called Chandris Lines, her owners, and was told that she could be had. The plan was unfolding nicely, although she was really not big enough, had the wrong kind of lifeboat davits and, of course, had two instead of four smokestacks. Then a call came in from Chandris: &quot;You are too late. The Queen Frederica (her present name) is being scrapped.&quot; Her stacks were already gone and some of her superstructure had come off, too. What a shame. But this sad ending to what might have been an interesting final experience for the gallant old lady in no way dims her story. Designed by William Francis Gibbs as his first major liner, she was a beauty. Gibbs was so demanding and ruled with such an iron hand that she broke her builders. The

FRANK 0. BRA YNARD, general manager of Operation Sail 1976, is now director of the New York Harbor Festival, famous Cramp yard on the Delaware went out of business after delivering this 582-footer. Gibbs had done the same thing, almost, to Newport News Shipbuilding and Dry Dock Co. after their work restoring the Leviathan in 1922. He would again do much the same with the America in 1939. He wanted the perfect ship and his specifications were demanding. The Maiolo was built for service between San Francisco and Honolulu. Her American gross tonnage was 17 ,222 but

when measured the same way other major liners were she became 21,329 gross. She had her lifeboats on a lower deck and was quite a roller. With two perfectly proportioned stacks, a massivelooking superstructure and fine cruiser stern she was most handsome. Her main claim to fame, however, was her compartmentation and watertight bulkheads. She was far in advance of most liners from the safety standpoint, and her trial trip gave her a chance to prove it. She was hit by a Norwegian freighter and survived, on an even keel. The blow was described at the time as as severe as the blow that sank the Empress of Ireland, and the opening in her hull was said to be as huge as that which sank the Titanic, but she remained afloat. She deserves a book. She had a charmed life over the next 50 years. In 1937 she was renamed Matsonia and her lifeboats were raised to the boat deck level to improve her seagoing qualities. She did yeoman service in the war and was renamed Atlantic in 1949 when bought by Home Lines. Sold again to Chandris, she became Queen Frederica in 1955 and had another long and successful career. Her loss is a sad one. She was without question one of the most successful of all ocean liners.

We salute the National Maritime Historical Society for their work to invite more Americans to enter into the learning of this nation&#39;s proud sea heritage.