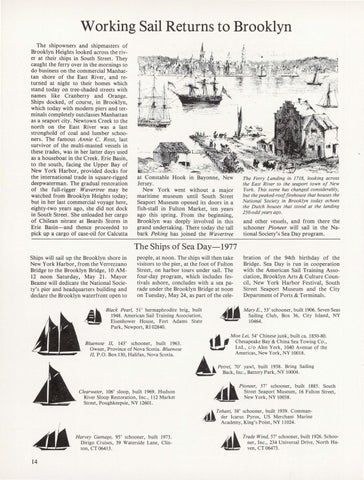 Working Sail Returns to Brooklyn The shipowners and shipmasters of Brooklyn Heights looked across the river at their ships in South Street. They caught the ferry over in the mornings to do business on the commercial Manhattan shore of the East River, and returned at night to their homes which stand today on tree-shaded streets with names like Cranberry and Orange. Ships docked, of course, in Brooklyn, which today with modern piers and terminals completely outclasses Manhattan as a seaport city. Newtown Creek to the north on the East River was a last stronghold of coal and lumber schooners. The famous Annie C. Ross, last survivor of the multi-masted vessels in these trades, was in her latter days used as a houseboat in the Creek. Erie Basin, to the south, facing the Upper Bay of New York Harbor, provided docks for the international trade in square-rigged deepwaterman . The gradual restoration of the full-rigger Wavertree may be watched from Brooklyn Heights today; but in her last commercial voyage here, eighty-two years ago, she did not dock in South Street. She unloaded her cargo of Chilean nitrate at Beards Stores in Erie Basin-and thence proceeded to pick up a cargo of case-oil for Calcutta

at Constable Hook in Bayonne, New Jersey. New York went without a major maritime museum until South Street Seaport Museum opened its doors in a fish-stall in Fulton Market, ten years ago this spring. From the beginning, Brooklyn was deeply involved in this grand undertaking. There today the tall bark Peking has joined the Wavertree

Th e Ferry Landing in 1718, looking across the East River to the seaport town of New York. This scene has changed considerably, but the peaked-roof firehouse that houses the National Society in Brooklyn today echoes th e Dutch houses that stood at the landing 250-odd years ago.

and other vessels, and from there the schooner Pioneer will sail in the National Society&#39;s Sea Day program.

The Ships of Sea Day-1977 Ships will sail up the Brooklyn shore in New York Harbor, from the Verrezzano Bridge to the Brooklyn Bridge, 10 AM12 noon Saturday, May 21. Mayor Beame will dedicate the National Society&#39;s pier and headquarters building and declare the Brooklyn waterfront open to

people, at noon . The ships will then take visitors to the pier, at the foot of Fulton Street, on harbor tours under sail. The four-day program, which includes festivals ashore, concludes with a sea parade under the Brooklyn Bridge at noon on Tuesday, May 24, as part of the cele-