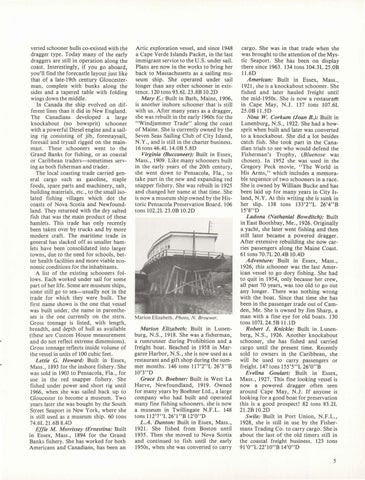 verted schooner hulls co-existed with the dragger type. Today many of the early draggers are still in operation along the coast. Interestingly, if you go aboard, you&#39;ll find the forecastle layout just like that of a late-19th century Gloucesterman, complete with bunks along the sides and a tapered table with folding wings down the middle. In Canada the ship evolved on different lines than it did in New England. The Canadians developed a large knockabout (no bowsprit) schooner with a powerful Diesel engine and a sailing rig consisting of jib, forestaysail, foresail and trysail rigged on the mainmast. These schooners went to the Grand Banks for fishing, or as coastal or Caribbean traders-sometimes serving as both fisherman and trader. The local coasting trade carried general cargo such as gasoline, staple foods, spare parts and machinery, salt, building materials, etc., to the small isolated fishing viliages which dot the coasts of Nova Scotia and Newfoundland. They returned with the dry salted fish that was the main product of these hamlets. This trade has only recently been taken over by trucks and by more modern craft. The maritime trade in general has slacked off as smaller hamlets have been consolidated into larger towns, due to the need for schools, better health facilities and more viable economic conditions for the inhabitants. A list of the existing schooners follows. Each worked under sail for some part of her life. Some are museum ships, some still go to sea-usually not in the trade for which they were built. The first name shown is the one that vessel was built under, the name in parentheses is the one currently on the stern. Gross tonnage is listed, with length, breadth, and depth of hull as available (these are Custom House measurement and do not reflect extreme dimensions). Gross tonnage reflects inside volume of the vessel in units of 100 cubic feet. Lettie G. Howard: Built in Essex, Mass., 1893 for the inshore fishery. She was sold in 1903 to Pensacola, Fla., for use in the red snapper fishery . She fished under power and short rig until 1966, when she was sailed back up to Gloucester to become a museum. Two years later she was bought by the South Street Seaport in New York, where she is still used as a museum ship. 60 tons 74.6L 21.6B 8.40 Effie M. Morrissey (Ernestina: Built in Essex, Mass., 1894 for the Grand Banks fishery. She has worked for both Americans and Canadians, has been an

Artie exploration vessel, and since 1948 a Cape Verde Islands Packet, in the last immigrant service to the U.S. under sail. Plans are now in the works to bring her back to Massachusetts as a sailing museum ship. She operated under sail longer than any other schooner in existence. 120 tons 93.6L 23.8B 10.20 Mary E.: Built in Bath, Maine, 1906, is another inshore schooner that is still with us. After many years as a dragger, she was rebuilt in the early 1960s for the &quot;Windjammer Trade&quot; along the coast of Maine. She is currently owned by the Seven Seas Sailing Club of City Island, N. Y., and is still in the charter business. 16 tons 46.4L 14.0B 5.80 Virginia (Buccaneer): Built in Essex, Mass., 1909. Like many schooners built in the early years of the 20th century, she went down to Pensacola, Fla., to take part in the new and expanding red snapper fishery. She was rebuilt in 1925 and changed her name at that time. She is now a museum ship owned by the Historic Pensacola Preservation Board. 106 tons 102.2L 23.0B 10.20