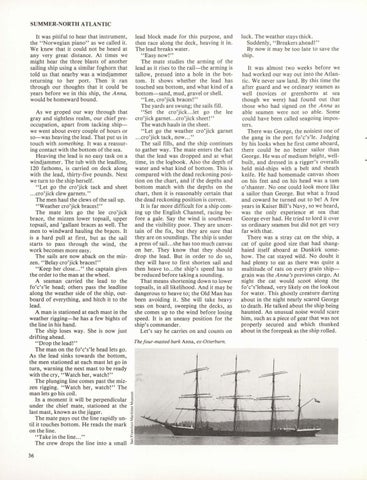 SUMMER-NORTH ATLANTIC It was pitiful to hear that instrument, the &quot;Norwegian piano&quot; as we called it. We knew that it could not be heard at any very great distance. At times we might hear the three blasts of another sailing ship using a similar foghorn that told us that nearby was a windjammer returning to her port. Then it ran through our thoughts that it could be years before we in this ship, the Anna, would be homeward bound.

As we groped our way through that gray and sightless realm, our chief preoccupation, apart from tacking shipwe went about every couple of hours or so-was heaving the lead. That put us in touch with something. It was a reassuring contact with the bottom of the sea. Heaving the lead is no easy task on a windjammer. The tub with the leadline, 120 fathoms, is carried on deck along with the lead, thirty-five pounds. Next we turn to the ship herself. &quot;Let go the cro&#39;jick tack and sheet ... cro&#39;jick clew garnets.&quot; The men haul the clews of the sail up. &quot;Weather cro&#39;jick braces!&quot; The mate lets go the lee cro&#39;jick brace, the mizzen lower topsail, upper topsail, and &#39;gallant braces as well. The men to windward hauling the br~ces. It is a hard pull at first, but as the sail starts to pass through the wind, the work becomes more easy. TheÂˇ sails are now aback on the mizzen. &quot;Belay cro&#39;jick braces!&quot; &quot;Keep her close ... &quot; the captain gives the order to the man at the wheel. A seaman carried the lead to the fo&#39;c&#39;s&#39;le head; others pass the leadline along the weather side of the ship, outboard of everything, and hitch it to the lead. A man is stationed at each mast in the weather rigging-he has a few bights of the line in his hand. The ship loses way. She is now just drifting ahead. &quot;Drop the lead!&quot; The man on the fo&#39;c&#39;s&#39;le head lets go. As the lead sinks towards the bottom, the men stationed at each mast let go in turn, warning the next mast to be ready with the cry, &quot;Watch her, watch!&quot; The plunging line comes past the mizzen rigging. &quot;Watch her, watch!&quot; The man lets go his coil. In a moment it will be perpendicular under the chief mate, stationed at the last mast, known as the jigger. The mate pays out the line rapidly until it touches bottom. He reads the mark on the line. &#39;&#39;Take in the line ... &#39;&#39; The crew drops the line into a small 36

lead block made for this purpose, and then race along the deck, heaving it in . The lead breaks water. &quot;Easy now!&quot; The mate studies the arming of the lead as it rises to the rail-the arming is tallow, pressed into a hole in the bottom. It shows whether the lead has touched sea bottom, and what kind of a bottom-sand, mud, gravel or shell. &quot;Lee, cro&#39;jick braces!&quot; The yards are swung; the sails fill. &quot;Set the cro&#39;jick .. .let go the lee cro&#39;jick garnet...cro &#39;jick sheet! &quot; The watch hauls in the sheet. &quot;Let go the weather cro&#39;jick garnet ... cro&#39;jick tack, now ... &quot; The sail fills, and the ship continues to gather way. The mate enters the fact that the lead was dropped and at what time, in the logbook . Also the depth of water and what kind of bottom. This is compared with the dead reckoning position on the chart, and if the depths and bottom match with the depths on the chart, then it is reasonably certain that the dead reckoning position is correct. It is far more difficult for a ship coming up the English Channel, racing before a gale. Say the wind is southwest and the visibility poor. They are uncertain of the fix, but they are sure that they are on soundings. The ship is under a press of sail. .. she has too much canvas on her. They know that they should drop the lead. But in order to do so, they will have to first shorten sail and then heave to ... the ship&#39;s speed has to be reduced before taking a sounding. That means shortening down to lower topsails, in all likelihood. And it may be dangerous to heave to; the Old Man has been avoiding it. She will take heavy seas on board, sweeping the decks, as she comes up to the wind before losing speed. It is an uneasy position for the ship&#39;s commander. Let&#39;s say he carries on and counts on The/our-masted bark Anna, ex-Otterburn.

luck. The weather stays thick. Suddenly, &quot;Breakers ahead!&quot; By now it may be too late to save the ship. It was almost two weeks before we had worked our way out into the Atlantic. We never saw land. By this time the after guard and we ordinary seamen as well (novices or greenhorns at sea though we were) had found out that those who had signed on the Anna as able seamen were not so able. Some could have been called seagoing imposters . There was George, the noisiest one of the gang in the port fo&#39;c&#39;s&#39;le. Judging by his looks when he first came aboard, there could be no better sailor than George. He was of medium height, wellbuilt, and dressed in a rigger&#39;s overalls held mid-ships with a belt and sheath knife. He had homemade canvas shoes on his feet and on his head was a tam o&#39;shanter. No one could look more like a sailor than George. But what a fraud and coward he turned out to be! A few years in Kaiser Bill&#39;s Navy, so we heard, was the only experience at sea that George ever had. He tried to lord it over us ordinary seamen but did not get very far with that. There was a stray cat on the ship, a cat of quite good size that had shanghaied itself aboard at Dunkirk somehow. The cat stayed wild. No doubt it had plenty to eat as there was quite a multitude of rats on every grain shipgrain was the Anna&#39;s previous cargo. At night the cat would scoot along the fo&#39;c&#39;s&#39;lehead, very likely on the lookout for water. This ghostly creature darting about in the night nearly scared George to death. He talked about the ship being haunted. An unusual noise would scare him, such as a piece of gear that was not properly secured and which thunked about in the forepeak as the ship rolled.