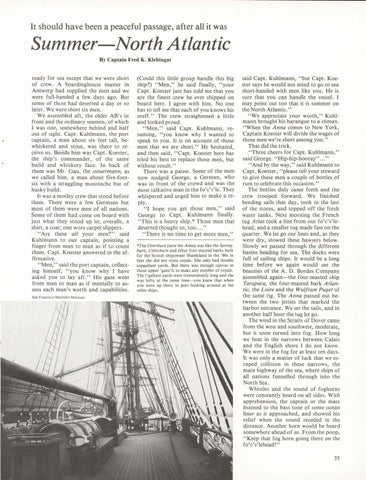 It should have been a peaceful passage, after all it was

ready for sea except that we were short of crew. A boardinghouse master in Antwerp had supplied the men and we were full-handed a few days ago. But some of tht.:se had deserted a day or so later. We were short six men . We assembled aft, the older AB&#39;s in front and the ordinary seamen, of which I was one, somewhere behind and half out of sight. Capt. Kuhlmann, the port captain, a man about six feet tall, bewhiskered and stout, was there to receive us. Beside him was Capt. Koester, the ship&#39;s commander, of the same build and whiskery face. In back of them was Mr. Gau, the steuermann, as we called him, a man about five-footsix with a straggling moustache but of husky build . It was a motley crew that stood before them. There were a few Germans but most of them were men of all nations. Some of them had come on board with just what they stood up in; overalls, a shirt, a coat; one wore carpet slippers. &quot; Are these all your men?&quot; said Kuhlmann to our captain, pointing a finger from man to man as if to count them . Capt. Koester answered in the affirmative. &quot;Men,&quot; said the port captain, collecting himself, &quot;you know why I have asked you to lay aft.&quot; His gaze went from man to man as if mentally to assess each man&#39;s worth and capabilities. San Franci sco Maritim e Muse um

(Could this little group handle this big ship?) &quot;Men,&quot; he said finally, &quot;your Capt. Koester just has told me that you are the finest crew he ever shipped on board here. I agree with him . No one has to tell me that each of you knows his stuff.&quot; The crew straightened a little and looked proud. &quot;Men,&quot; said Capt. Kuhlmann, resuming, &quot;you know why I wanted to speak to you. It is on account of those men that we are short.&quot; He hesitated, and then said, &#39;&#39;Capt. Koester here has tried his best to replace those men, but without result.&quot; There was a pause. Some of the men now nudged George, a German, who was in front of the crowd and was the most talkative man in the fo&#39;c&#39;s&#39;le. They whispered and urged him to make a reply. &quot;I hope you get those men,&quot; said George to Capt. Kuhlmann finally. &quot;This is a heavy ship.* Those men that deserted thought so, too .... &quot; &quot;There is no time to get more men,&quot; *The Otterburn (now the Anna) was like the Springburn, Celticburn and other four-masted barks built for the Scotch shipowner Shankland in the &#39;90s in that she did not cross royals. She only had double topgallant yards. But there was enough canvas in those upper &#39;gans&#39;ls to make any number of royals. The t&#39; gallant yards were tremendously long and she was lofty at the same time- you knew that when you were up there in port looking around at the other ships.

said Capt. Kuhlmann, &quot;but Capt. Koester says he would not mind to go to sea short-handed with men like you . He is sure that you can handle the vessel. I may point out too that it is summer on the North Atlantic.&#39;&#39; &quot;We appreciate your worth,&quot; Kuhlmann brought his harangue to Âˇa climax. &quot;When the Anna comes to New York, Captain Koester will divide the wages of those men we&#39;re short among you.&quot; That did the trick. &quot;Three cheers for Capt. Kuhlmann,&quot; said George . &quot;Hip-hip-hooray&quot; .. . &quot; &quot;And by the way,&quot; said Kuhlmann to Capt. Koester, &quot;please tell your steward to give these men a couple of bottles of rum to celebrate this occasion.&quot; The bottles duly came forth and the crew trooped forward . We finished bending sails that day, took in the last of the stores , and topped off the fresh water tanks. Next morning the French tug Atlas took a line from our fo&#39;c&#39;s&#39;lehead, and a smaller tug made fast on the quarter. We let go our lines and, as they were dry, stowed these haw5ers below. Slowly we passed through the different basins heading for sea. The docks were full of sailing ships. It would be a long time before we again would see the beauties of the A. D. Bordes Company assembled again-the four-masted ship Tarapaca, the four-masted bark Atlantic, the Loire and the Wuljram Puget of the same rig. The Anna passed out between the two jetties that marked the harbor entrance. We set the sails, and in another half hour the tug let go. The wind in the Straits of Dover came from the west and southwest, moderate, but it soon turned into fog. How long we beat in the narrows between Calais and the English shore I do not know. We were in the fog for at least ten days. It was only a matter of luck that we escaped collision in these narrows, the main highway of the sea, where ships of all nations funnelled through into the North Sea. Whistles and the sound of foghorns were constantly heard on all sides. With apprehension, the captain or the mate listened to the bass tone of some ocean liner as it approached, and showed his relief when the sound receded in the distance. Another horn would be heard somewhere ahead of us. From the poop, &quot;Keep that fog horn going there on the fo&#39;c&#39;s&#39;lehead!&quot; 35