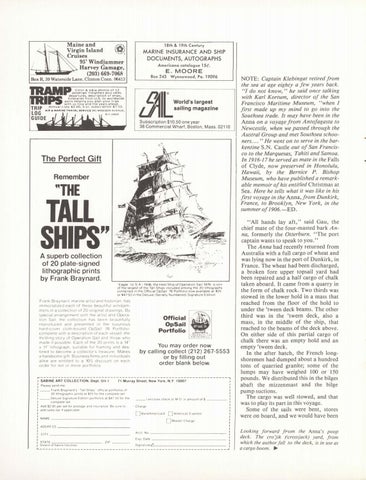 Frank Braynard. marine ar11~! and historian has 1mmorlal1zed e ach o f these beau11ful w1ncf1am· mers 1n a collec11on of 20 original drawings. By special arrangement wilh 1he ar11s1 and Opera· lion Sail lhe colleclion llas been bc•a ul1fully reproducecl and presented in the luxurious hard-cover clo lh-bound OpSail 76 Por1fol10 complete with a clescrip11on of each vessel the 1hril l1ng slory of Opera11on Sail and 1hose who made 11 possible Each o f 111e 20 prinls is a 14 &quot; x 11 &quot; l11hograph su11able fo r framing and des· tined to become a collectors treasure Makes a handsome gift Business fi rms and m cllv1duals alike are entitled to a 10% d1scoun1 o n each order for !en or more portfor1os

NOTE: Captain Klebingat retired from the sea at age eighty a few years back. &quot;I do not know, &quot; he said once talking with Karl Kortum, director of the San Francisco Maritime Museum, &quot;when I first made up my mind to go into the Southsea trade. It may have been in the Anna on a voyage from Antofagasta to Newcastle, when we passed through the Austral Group and met Southsea schooners.... &quot;He went on to serve in the barkentine S.N. Castle out of San Francisco to the Marquesas, Tahiti and Samoa. In 1916-17 he served as mate in the Falls of Clyde, now preserved in Honolulu, Hawaii, by the Bernice P. Bishop Museum, who have published a remarkable memoir of his entitled Christmas at Sea. Here he tells what it was like in his first voyage in the Anna, from Dunkirk, France, to Brooklyn, New York, in the summer of 1906.-ED. &quot;All hands lay aft,&quot; said Gau, the chief mate of the four-masted bark Anna, formerly the Otterburn. &quot;The port captain wants to speak to you.&quot; The Anna had recently returned from Australia with a full cargo of wheat and was lying now in the port of Dunkirk, in France. The wheat had been discharged, a broken fore upper topsail yard had been repaired and a half cargo of chalk taken aboard. It came from a quarry in the form of chalk rock. Two thirds was stowed in the lower hold in a mass that reached from the floor of the hold to under the &#39;tween deck beams. The other third was in the &#39;tween deck, also a mass, in the middle of the ship, that reached to the beams of the deck above. On either side of this partial cargo of chalk there was an empty hold and an empty &#39;tween deck. In the after hatch, the French longshoremen had dumped about a hundred tons of quarried granite; some of the Jumps may have weighed 100 or · 150 pounds. We distributed this in the bilges abaft the mizzenmast and the bilge pump suctions. The cargo was well stowed, and that was to play its part in this voyage. Some of the sails were bent, stores were on board, and we would have been