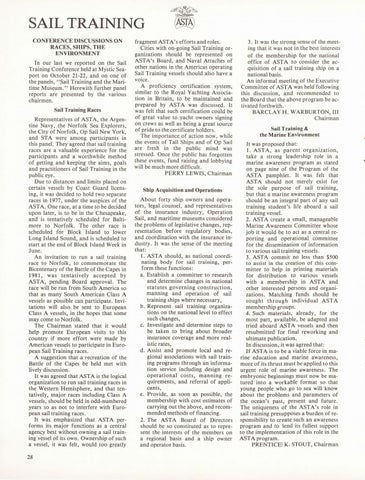 SAIL TRAINING CONFERENCE DISCUSSIONS ON RACES, SHIPS, THE ENVIRONMENT In our last we reported on the Sail Training Conference held at Mystic Seaport on October 21-22, and on one of the panels, &quot;Sail Training and the Maritime Museum .&quot; Herewith further panel reports are presented by the various chairmen. Sail Training Races Representatives of AST A, the Argentine Navy, the Norfolk Sea Explorers, the City of Norfolk, Op Sail New York, and ST A were among participants in this panel. They agreed that sail training races are a valuable experience for the participants and a worthwhile method of getting and keeping the aims, goals and practitioners of Sail Training in the public eye. Due to distances and limits placed on certain vessels by Coast Guard licensing, it was decided to hold two separate races in 1977, under the auspices of the ASTA. One race, at a time to be decided upon later, is to be in the Chesapeake, and is tentatively scheduled for Baltimore to Norfolk . The other race is scheduled for Block Island to lower Long-Island Sound, and is scheduled to start at the end of Block Island Week in June. An invitation to run a sail training race to Norfolk, to commemorate the Bicentenary of the Battle of the Capes in 1981, was tentatively accepted by AST A, pending Board approval. The race will be run from South America so that as many South American Class A vessels as possible can participate. Invitations will also be sent to European Class A vessels, in the hopes that some may come to Norfolk. The Chairman stated that it would help promote European visits to this country if more effort were made by American vessels to participate in European Sail Training races. A suggestion that a recreation of the Battle of the Capes be held met with lively discussion. It was agreed that ASTA is the logical organization to run sail training races in the Western Hemisphere, and that tentatively, major races including Class A vessels, should be held in odd-numbered years so as not to interfere with European sail training races. It was emphasized that AST A performs its major functions as a central agency best without owning a sail training vessel of its own. Ownership of such a vessel, it was felt, would too greatly

fragment AST A&#39;s efforts and roles . Cities with on-going Sail Training organizations should be represented on ASTA&#39;s Board, and Naval Attaches of other nations in the Americas operating Sail Training vessels should also have a voice. A proficiency certification system, similar to the Royal Yachting Association in Britain, to be maintained and prepared by AST A was discussed . It was felt that such certification could be of great value to yacht owners signing on crews as well as being a great source of pride to the certificate holders. The importance of action now, while the events of Tall Ships and of Op Sail are fresh in the public mind was stressed. Once the public has forgotten these events, fund raising and lobbying will be much more difficult. PERRY LEWIS, Chairman Ship Acquisition and Operations About forty ship owners and operators, legal counsel, and representatives of the insurance industry, Operation Sail, and maritime museums considered the problems of legislative changes, representation before regulatory bodies, and coordination with the insurance industry. It was the sense of the meeting that: l. ASTA should, as national coordinating body for sail training, perform these functions: a. Establish a committee to research and determine changes in national statutes governing construction, manning and operation of sail training ships where necessary, b. Represent sail training organizations on the national level to effect such changes, c. Investigate and determine steps to be taken to bring about broader insurance coverage and more realistic rates, d. Assist and promote local and regional associations with sail training programs through an information service including design and operational costs, manning requirements, and referral of applicants, e. Provide, as soon as possible, the membership with cost estimates of carrying out the above, and recommended methods of financing. 2. The AST A Board of Directors should be so constituted as to represent the interests of the members on a regional basis and a ship owner and operator basis.

3. It was the strong sense of the meeting that it was not in the best interests of the membership for the national office of AST A to consider the acquisition of a sail training ship on a national basis. An informal meeting of the Executive Committee of AST A was held following this discussion, and recommended to the Board that the above program be activated forthwith. BARCLAY H. WARBURTON, III Chairman Sail Training &amp; the Marine Environment It was proposed that:

l. AST A, as parent organization, take a strong leadership role in a marine awareness program as stated on page nine of the Program of the ASTA pamphlet. It was felt that AST A should not merely exist for the sole purpose of sail training, but that a marine awareness program should be an integral part of any sail training student&#39;s life aboard a sail training vessel. 2. ASTA create a small, manageable Marine Awareness Committee whose job it would be to act as a central reporting and operational committee for the dissemination of information to various sail training vessels. 3. ASTA commit no less than $500 to assist in the creation of this committee to help in printing materials for distribution to various vessels with a membership in AST A and other interested persons and organizations. Matching funds should be sought through individual AST A membership groups. 4. Such materials, already, for the most part, available, be adapted and tried aboard AST A vessels and then resubmitted for final reworking and ultimate publication. In discussion, it was agreed that: If AST A is to be a viable force in marine education and marine awareness, more of its thrust must be applied to this urgent role of marine awareness. The embryonic beginnings must now be matured into a workable format so that young people who go to sea will know about the problems and parameters of the ocean&#39;s past, present and future . The uniqueness of the AST A&#39;s role in sail training presupposes a burden of responsibility to create such an awareness program and to lend its fullest support to the implementtation of this role in the ASTA program. PRENTICE K. STOUT, Chairman