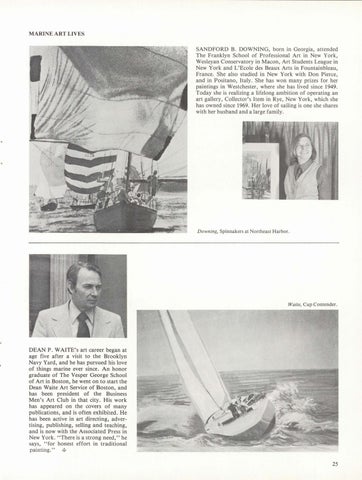 SANDFORD B. DOWNING, born in Georgia, attended The Franklyn School of Professional Art in New York, Wesleyan Conservatory in Macon, Art Students League in New York and L'Ecole des Beaux Arts in Fountainbleau, France. She also studied in New York with Don Pierce, and in Positano, Italy. She has won many prizes for her paintings in Westchester, where she has lived since 1949. Today she is realizing a lifelong ambition of operating an art gallery, Collector's Item in Rye, New York, which she has owned since 1969. Her love of sailing is one she shares with her husband and a large family.

DEAN P. W AITE's art career began at age five after a visit to the Brooklyn Navy Yard, and he has pursued his love of things marine ever since. An honor graduate of The Vesper George School of Art in Boston, he went on to start the Dean Waite Art Service of Boston, and has been president of the Business Men's Art Club in that city. His work has appeared on the covers of many publications, and is often exhibited. He has been active in art directing, advertising, publishing, selling and teaching, and is now with the Associated Press in New York. "There is a strong need," he says, "for honest effort in traditional painting." w 25