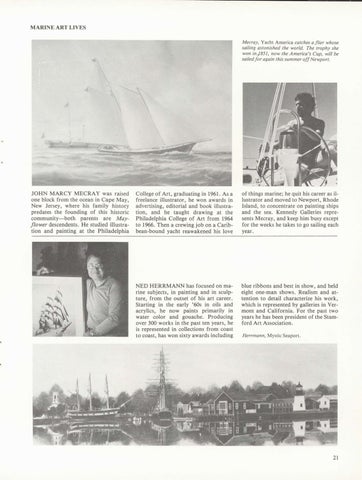 MARINE ART LIVES Mecray, Yacht America catches a flier whose sailing astonished the world. The trophy she won in J85/, now the America&#39;s Cup, will be sailed for again this summer off Newport.

JOHN MARCY MECRA Y was raised one block from the ocean in Cape May, New Jersey, where his family history predates the founding of this historic community-both parents are Mayflower descendents. He studied illustration and painting at the Philadelphia

College of Art, graduating in 1961. As a freelance illustrator, he won awards in advertising, editorial and book illustration, and he taught drawing at the Philadelphia College of Art from 1964 to 1966. Then a crewing job on a Caribbean-bound yacht reawakened his love

of things marine; he quit his career as illustrator and moved to Newport, Rhode Island, to concentrate on painting ships and the sea. Kennedy Galleries represents Mccray, and keep him busy except for the weeks he takes to go sailing each year.

NED HERRMANN has focused on marine subjects, in painting and in sculpture, from the outset of his art career. Starting in the early &#39;60s in oils and acrylics, he now paints primarily in water color and gouache. Producing over 300 works in the past ten years, he is represented in collections from coast to coast, has won sixty awards including

blue ribbons and best in show, and held eight one-man shows. Realism and attention to detail characterize his work, which is represented by galleries in Vermont and California. For the past two years he has been president of the Stamford Art Association. Herrmann, Mystic Seaport.