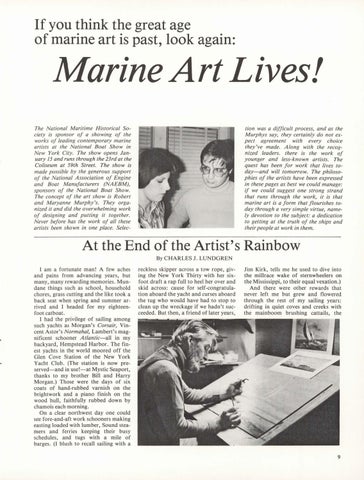 If you think the great age of marine art is past, look again:

Marine Art Lives! The National Maritime Historical Society is sponsor of a showing of the works of leading contemporary marine artists at the National Boat Show in New York City. The show opens January 15 and runs through the 23rd at the Coliseum at 59th Street. The show is made possible by the generous support of the National Association of Engine and Boat Manufacturers (NAEBM), sponsors of the National Boat Show. The concept of the art show is Robert and Maryanne Murphy&#39;s. They organized it and did the overwhelming work of designing and putting it together. Never before has the work of all these artists been shown in one place. Selec-

tion was a difficult process, and as the Murphys say, they certainly do not expect agreement with every choice they&#39;ve made. Along with the recognized leaders. there is the work of younger and less-known artists. The quest has been for work that lives today-and will tomorrow. The philosophies of the artists have been expressed in these pages as best we could manage: if we could suggest one strong strand that runs through the work, it is that marine art is a form that flourishes today through a very simple virtue, namely devotion to the subject: a dedication to getting at the truth of the ships and their people at work in them.

At the End of the Artist&#39;s Rainbow By CHARLES J. LUNDGREN l am a fortunate man! A few aches and pains from advancing years, but many, many rewarding memories. Mundane things such as school, household chores, grass cutting and the like took a back seat when spring and summer arrived and l headed for my eighteenfoot catboat. I had the privilege of sailing among such yachts as Morgan&#39;s Corsair, Vincent Astor&#39;s Normahal, Lambert&#39;s magnificent schooner Atlantic-all in my backyard, Hempstead Harbor. The finest yachts in the world moored off the Glen Cove Station of the New York Yacht Club. (The station is now preserved-and in use!-at Mystic Seaport, thanks to my brother Bill and Harry Morgan.) Those were the days of six coats of hand-rubbed varnish on the brightwork and a piano finish on the wood hull, faithfully rubbed down by chamois each morning. On a clear northwest day one could see fore-and-aft work schooners making easting loaded with lumber, Sound steamers and ferries keeping their busy schedules, and tugs with a mile of barges. (l blush to recall sailing with a

reckless skipper across a tow rope, giving the New York Thirty with her sixfoot draft a rap full to heel her over and skid across: cause for self-congratulation aboard the yacht and curses aboard the tug who would have had to stop to clean up the wreckage if we hadn&#39;t succeeded. But then, a friend of later years,

Jim Kirk, tells me he used to dive into the millrace wake of sternwheelers on the Mississippi, to their equal vexation.) And there were other rewards that never left me but grew and flowered through the rest of my sailing years: drifting in quiet coves and creeks with the mainboom brushing cattails, the