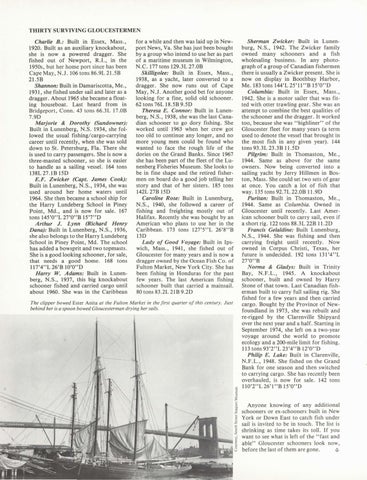 for a while and then was laid up in Newport News, Va. She has just been bought by a group who intend to use her as part of a maritime museum in Wilmington, N.C. 177 tons 129.3L 27 .OB Skilligolee: Built in Essex, Mass., 1938, as a yacht, later converted to a dragger. She now runs out of Cape May, N.J. Another good bet for anyone looking for a fine, solid old schooner. 62 tons 76L 18.5B 9.5D Theresa E. Connor: Built in Lunenberg, N.S., 1938, she was the last Canadian schooner to go dory fishing. She worked until 1963 when her crew got too old to continue any longer, and no more young men could be found who wanted to face the rough life of the dories on the Grand Banks. Since 1967 she has been part of the fleet of the Lunenberg Fisheries Museum . She looks to be in fine shape and the retired fishermen on board do a good job telling her story and that of her sisters. 185 tons 142L 27B 15D Caroline Rose: Built in Lunenburg, N.S ., 1940, she followed a career of fishing and freighting mostly out of Halifax. Recently she was bought by an American who plans to use her in the Caribbean. 173 tons 127&#39;5&quot;L 26&#39;8&quot;B 13D Lady of Good Voyage: Built in Ipswich, Mass., 1941, she fished out of Gloucester for many years and is now a dragger owned by the Ocean Fish Co. of Fulton Market, New York City. She has been fishing in Honduras for the past few years. The last American fishing schooner built that carried a mainsail. 80 tons 83 .2L 21B9.2D

The clipper bowed Ester Anita at the Fulton Market in the first quarter of this century. Just behind her is a spoon bowed Gloucesterman drying her sails.

g Anyone knowing of any additional Jl schooners or ex-schooners built in New York or Down East to catch fi sh under sail is invited to be in touch. The list is shrinking as time takes its toll . If you ~ want to see what is left of the &quot;fast and ~ able&quot; Gloucester schooners look now , 8 before the last of them are gone. .t :J