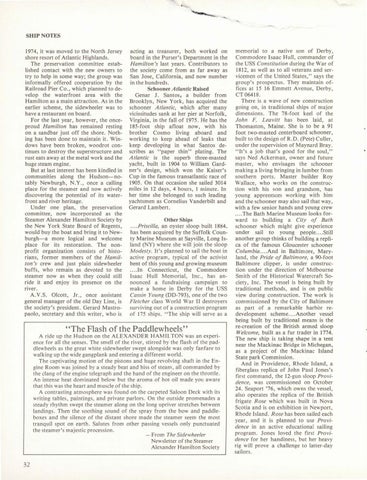 1974, it was moved to the North Jersey shore resort of Atlantic Highlands. The preservation committee established contact with the new owners to try to help in some way; the group was informally offered cooperation by the Railroad Pier Co., which planned to develop the waterfront area with the Hamilton as a main attraction. As in the earlier scheme, the sidewheeler was to have a restaurant on board. For the last year, however, the onceproud Hamilton has remained resting on a sandbar just off the shore. Nothing has been done to maintain it. Windows have been broken, woodrot continues to destroy the superstructure and rust eats away at the metal work and the huge steam engine. But at last interest has been kindled in communities along the Hudson-notably Newburgh, N.Y., once a calling place for the steamer and now actively discovering the potential of its waterfront and river heritage. Under one plan, the preservation committee, now incorporated as the Steamer Alexander Hamilton Society by the New York State Board of Regents, would buy the boat and bring it to Newburgh-a more logical and welcome place for its restoration. The nonprofit organization consists of historians, former members of the Hamilton's crew and just plain sidewheeler buffs, who remain as devoted to the steamer now as when they could still ride it and enjoy its presence on the river. A.V.S. Olcott, Jr., once assistant general manager of the old Day Line, is the society's president. Gerard Mastropaolo, secretary and this writer, who is

acting as treasurer, both worked on board in the Purser's Department in the Hamilton's last years. Contributors to the society come from as far away as San Jose, California, and now number in the hundreds. Schooner Atlantic Raised Genar J. Santos, a builder from Brooklyn, New York, has acquired the schooner Atlantic, which after many vicissitudes sank at her pier at Norfolk, Virginia, in the fall of 1975. He has the 185-foot ship afloat now, with his brother Cosmo living aboard and working to keep ahead of leaks that keep developing in what Santos describes as "paper thin" plating. The Atlantic is the superb three-masted yacht, built in 1904 to William Gardner's design, which won the Kaiser's Cup in the famous transatlantic race of 1905. On that occasion she sailed 3014 miles in 12 days, 4 hours, 1 minute. In her time she belonged to such leading yachtsmen as Cornelius Vanderbilt and Gerard Lambert. Other Ships .... Priscilla, an oyster sloop built 1884. has been acquired by the Suffolk County Marine Museum at Sayville, Long Island (NY) where she will join the sloop Modesty. It's planned to sail the boat in active program, typical of the activist bent of this young and growing museum .... In Connecticut, the Commodore Isaac Hull Memorial, Inc., has announced a fundraising campaign to make a home in Derby for the USS Cassin Young (DD-793), one of the two Fletcher class World War II destroyers surviving out of a construction program of 175 ships. "The ship will serve as a

"The Flash of the Paddlewheels" A ride up the Hudson on the ALEXANDER HAMIL TON was an experience for all the senses. The smell of the river, stirred by the flash of the paddlewheels as the great white sidewheeler swept alongside was only fanfare to walking up the wide gangplank and entering a different world. The captivating motion of the pistons and huge revolving shaft in the Engine Room was joined by a steady beat and hiss of steam, all commanded by the clang of the engine telegraph and the hand of the engineer on the throttle. An intense heat dominated below but the aroma of hot oil made you aware that this was the heart and muscle of the ship. A contrasting atmosphere was found on the carpeted Saloon Deck with its writing tables, paintings, and private parlors. On the outside promenades a steady rhythm swept the steamer along on the long upriver stretches between landings. Then the soothing sound of the spray from the bow and paddleboxes and the silence of the distant shore made the steamer seem the most tranquil spot on earth. Salutes from other passing vessels only punctuated the steamer's majestic procession. - From The Sidewheeler Newsletter of the Steamer Alexander Hamilton Society

memorial to a native son of Derby, Commodore Isaac Hull, commander of the USS Constitution during the War of 1812, as well as to all veterans and servicemen of the United States," says the group's prospectus. They maintain offices at 15 16 Emmett Avenue, Derby, CT06418. There is a wave of new construction going on, in traditional ships of major dimensions. The 78-foot keel of the John F. Leavitt has been laid, at Thomaston, Maine. She is to be a 91 foot two-masted centerboard schooner, built to the design of R.D. (Pete) Culler, under the supervision of Maynard Bray. "It's a job that's good for the soul," says Ned Ackerman, owner and future master, who envisages the schooner making a living bringing in lumber from southern ports. Master builder Roy Wallace, who works on the construction with his son and grandson, has young apprentices working with him and the schooner may also sail that way, with a few senior hands and young crew .... The Bath Marine Museum looks forward to building a City of Bath schooner which might give experience under sail to young people .... Still another group thinks of building a replica of the famous Gloucester schooner Columbia .... And in Baltimore, Maryland, the Pride of Baltimore, a 90-foot Baltimore clipper, is under construction under the direction of Melbourne Smith of the Historical Watercraft Society, Inc. The vessel is being built by traditional methods, and is on public view during construction. The work is commissioned by the City of Baltimore as part of a remarkable harbor redevelopment scheme .... Another vessel being built by traditional means is the re-creation of the British armed sloop Welcome, built as a fur trader in 1774. The new ship is taking shape in a tent near the Mackinac Bridge in Michegan, as a project of the Mackinac Island State park Commission. And in Providence, Rhode Island, a fiberglass replica of John Paul Jones's first command, the 12-gun sloop Providence, was commissioned on October 24. Seaport '76, which owns the vessel, also operates the replica of the British frigate Rose which was built in Nova Scotia and is on exhibition in Newport, Rhode Island. Rose has been sailed each year, and it is planned to use Providence in an active educational sailing program. Jones loved the first Providence for her handiness, but her heavy rig will prove a challenge to latter-day sailors.