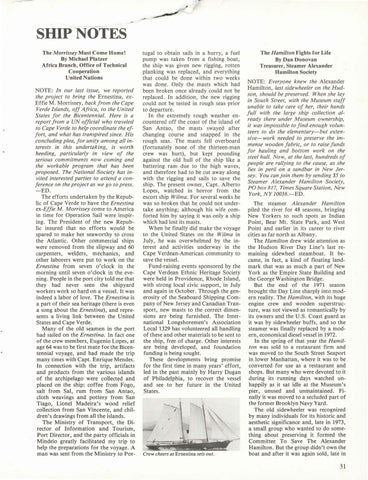 SHIP NOTES The Morrissey Must Come Home! By Michael Platzer Africa Branch, Office of Technical Cooperation United Nations NOTE: In our last issue, we reported the project to bring the Ernestina, exEffie M. Morrissey, back from the Cape

Verde Islands, off Africa, to the United States for the Bicentennial. Here is a report from a UN official who traveled to Cape Verde to help coordinate the effort, and what has transpired since. His concluding plea, for unity among all interests in this undertaking, is worth heeding, particularly in view of the serious commitments now coming and the workable program that has been proposed. The National Society has invited interested parties to attend a con! erence on the project as we go to press. -ED. The efforts undertaken by the Republic of Cape Verde to have the Ernestina ex-Effie M. Morrissey come to America in time for Operation Sail were inspiring. The President of the new Republic insured that no efforts would be spared to make her seaworthy to cross the Atlantic. Other commercial ships were removed from the slipway and 60 carpenters, welders, mechanics, and other laborers were put to work on the Ernestina from seven o&#39;clock in the morning until seven o&#39;clock in the evening. People in the port city told me that they had never seen the shipyard workers work so hard on a vessel. It was indeed a labor of love. The Ernestina is a part of their sea heritage (there is even a song about the Ernestina), and represents a living link between the United States and Cape Verde. Many of the old seamen in the port had sailed on the Ernestina. In fact one of the crew members, Eugenio Lopes, at age 64 was to be first mate for the Bicentennial voyage, and had made the trip many times with Capt. Enrique Mendes. In connection with the trip, artifacts and products from the various islands of the archipelago were collected and placed on the ship: coffee from Fogo, salt from Sal, rum from San Antao, cloth weavings and pottery from San Tiago, Lionel Madeira&#39;s wood relief collection from San Vincente, and children&#39;s drawings from all the islands. The Ministry of Transport, the Director of Information and Tourism, Port Director, and the party officials in Mindelo greatly facilitated my trip to help the preparations for the voyage. A man was sent from the Ministry to Por-

tugal to obtain sails in a hurry, a fuel pump was taken from a fishing boat, the ship was given new rigging, rotten planking was replaced, and everything that could be done within two weeks was done. Only the masts which had been broken once already could not be replaced. In addition, the new rigging could not be tested in rough seas prior to departure. In the extremely rough weather encountered off the coast of the island of San Antao, the masts swayed after changing course and snapped in the rough seas. The masts fell overboard (fortunately none of the thirteen-man crew was hurt), but kept pounding against the old hull of the ship like a battering ram due to the high waves, and therefore had to be cut away along with the rigging and sails to save the ship. The present owner, Capt. Alberto Lopes, watched in horror from the escort ship Wilma. For several weeks he was so broken that he could not undertake anything; although his wife comforted him by saying it was only a ship which had lost its masts. When he finally did make the voyage to the United States on the Wilma in July, he was overwhelmed by the interest and activities underway in the Cape Verdean-American community to save the vessel. Fund-raising events sponsored by the Cape Verdean Ethnic Heritage Society were held in Providence, Rhode Island, with strong local civic support, in July and again in October. Through the generosity of the Seaboard Shipping Company of New Jersey and Canadian Transport, new masts to the correct dimensions are being furnished. The International Longshoremen&#39;s Association Local 1329 has volunteered all handling of these and other materials to be sent to the ship, free of charge. Other interests are being developed, and foundation funding is being sought. These developments bring promise for the first time in many years&#39; effort, led in the past mainly by Harry Dugan of Philadelphia, to recover the vessel and see to her future in the United States.

Crew cheers as Erriestina sets out.

son, should be preserved. When she lay in South Street, with the Museum staff unable to take care of her, their hands full with the large ship collection already there under Museum ownership, it was impossible to find enough volunteers to do the elementary-but extensive-work needed to preserve the immense wooden fa bric, or to raise funds for hauling and bottom work on the steel hull. Now, at the last, hundreds of people are rallying to the cause, as she lies in peril on a sandbar in New Jersey. You can join them by sending $5 to Steamer Alexander Hamilton Society, PO box 817, Times Square Station, New York, NY 10036.-ED. The steamer Alexander Hamilton piled the river for 48 seasons, bringing New Yorkers to such spots as Indian Point, Bear Mt. State Park, and West Point and earlier in its career to river cities as far north as Albany. The Hamilton drew wide attention as the Hudson River Day Line&#39;s last remaining sidewheel steamboat. It became, in fact, a kind of floating landmark that was as much a part of New York as the Empire State Building and the George Washington Bridge. But the end of the 1971 season brought the Day Line sharply into modern reality. The Hamilton, with its huge engine crew and wooden superstructure, was not viewed as romantically by its owners and the U.S. Coast guard as it was by sidewheeler buffs, and so the steamer was finally replaced by a modern, economical diesel vessel in 1972. In the spring of that year the Hamilton was sold to a restaurant firm and was moved to the South Street Seaport in lower Manhattan, where it was to be converted for use as a restaurant and shops. But many who were devoted to it during its running days watched unhappily as it sat idle at the Museum&#39;s pier, unused and unmaintained. Finally it was moved to a secluded part of the former Brooklyn Navy Yard. The old sidewheeler was recognized by many individuals for its historic and aesthetic significance and, late in 1973, a small group who wanted to do something about preserving it formed the Committee To Save The Alexander Hamilton. But the group didn&#39;t own the boat and after it was again sold, late in