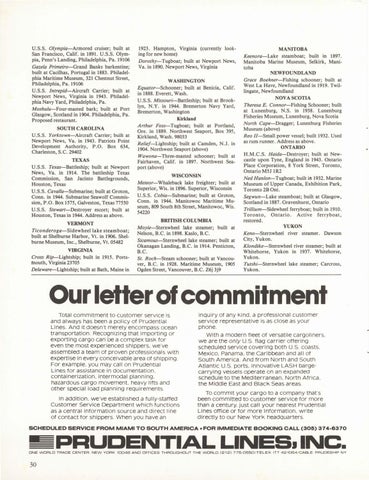 Our letter of commitment Total commitment to customer service is and always has been a policy of Prudential Lines. And it doesn &#39;t merely encompass ocean transportation . Recognizing that importing or exporting cargo can be a complex task for even the most experienced shippers. we·ve assembled a team of proven professionals with expertise in every conceivable area of shipping For example. you may call on Prudential Lines for assistance in documentation . containerization . intermodal planning . hazardous cargo movement. heavy lifts and other special load planning requirements In addition. we·ve established a fully-staffed Customer Service Department which functions as a central information source and direct line of contact for shippers. When you have an

inquiry of any kind. a professional customer service representative is as close as your phone. With a modern fleet of versatile cargoliners. we are the only U.S. flag carrier offering scheduled service covering both U.S. coasts. Mexico. Panama. the Caribbean and all of south America . And from North and south Atlantic U.S. ports. innovative LASH bargecarrying vessels operate on an expanded schedule to the Mediterranean. North Africa. the Middle East and Black Seas areas. To commit your cargo to a company that&#39;s been committed to customer service for more than a century. just call your nearest Prudential Lines office or for more information. write directly to our New York headquarters