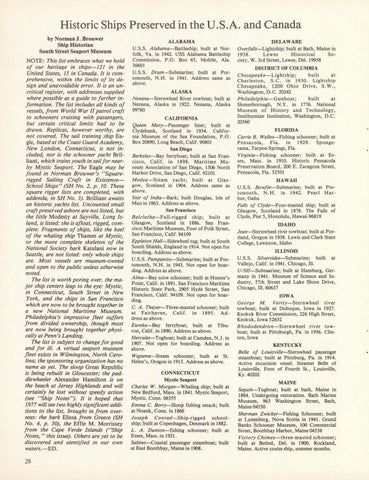 Historic Ships Preserved in the U.S.A. and Canada by Norman J. Brouwer

Ship Historian South Street Seaport Museum NOTE: This list embraces what we hold of our heritage in ships-121 in the United States, 15 in Canada. It is comprehensive, within the limits of its de:: sign and unavoidable error. It is an uncritical register, with addresses supplied where possible as a guide to further information . The list includes all kinds of vessels, from World War II patrol craft to schooners cruising with passengers, but certain critical limits had to be drawn. Replicas, however worthy, are not covered. The sail training ship Eagle, based at the Coast Guard Academy, New London, Connecticut, is not included, nor is the schooner yacht Brilliant, which trains youth in sail/or nearby Mystic Seaport. The Eagle may be found in Norman Brouwer&#39;s &quot;Squarerigged Sailing Craft in ExistenceSchool Ships&quot; (SH No. 2, p. JO. These square rigger lists are completed, with addenda, in SH No. 3). Brilliant awaits an historic yachts list. Uncounted small craft preserved ashore are not listed, but the little Modesty at Sayville, Long Island, is listed: she is afloat, rigged, complete. Fragments of ships, like the keel of the whaling ship Thames at Mystic, or the more complete skeleton of the National Society bark Kaiulani now in Seattle, are not listed: only whole ships are. Most vessels are museum-owned and open to the public unless otherwise noted. The list is worth poring over. the major ship centers leap to the eye: Mystic, in Connecticut, South Street in New York, and the ships in San Francisco which are now to be brought together in a new National Maritime Museum. Philadelphia&#39;s impressive fleet suffers from divided ownership, though most are now being brought together physically at Penn&#39;s Landing. The list is subject to change for good and for ill. A virtual seaport museum fleet exists in Wilmington, North Carolina; the sponsoring organization has no name as yet. The sloop Great Republic is being rebuilt in Gloucester; the paddlewheeler Alexander Hamilton is on the beach at Jersey Highlands and will certainly be lost without speedy action (see &quot;Ship Notes&quot;). It is hoped that 1977 will see two highly significant additions to the list, brought in from overseas: the bark Elissa from Greece (SH No. 4, p. 30), the Effie M. Morrissey from the Cape Verde Islands (&quot;Ship Notes, &quot; this issue). Others are yet to be discovered and identified in our own waters.-ED.