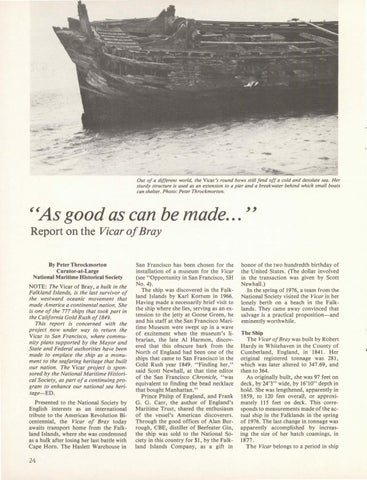 Out of a different world, the Vicar&#39;s round bows still fend off a cold and desolate sea. Her sturdy structure is used as an extension to a pier and a breakwater behind which small boats can shelter. Photo: Peter Throckmorton.

Report on the Vicar of Bray By Peter Throckmorton

Curator-at-Large National Maritime Historical Society NOTE: The Vicar of Bray, a hulk in the Falkland Islands, is the last survivor of the westward oceanic movement that made America a continental nation. She is one of the 777 ships that took part in the California Gold Rush of 1849. This report is concerned with the project now under way to return the Vicar to San Francisco, where community plans supported by the Mayor and State and Federal authorities have been made to emplace the ship as a monument to the seafaring heritage that built our nation. The Vicar project is sponsored by the National Maritime Historical Society, as part of a continuing program to enhance our national sea heritage-ED. Presented to the National Society by English interests as an international tribute to the American Revolution Bicentennial, the Vicar of Bray today awaits transport home from the Falkland Islands, where she was condemned as a hulk after losing her last battle with Cape Horn. The Haslett Warehouse in

San Francisco has been chosen for the installation of a museum for the Vicar (see &quot;Opportunity in San Francisco, SH No. 4). The ship was discovered in the Falkland Islands by Karl Kortum in 1966. Having made a necessarily brief visit to the ship where she lies, serving as an extension to the jetty at Goose Green, he and his staff at the San Francisco Maritime Museum were swept up in a wave of excitement when the museum&#39;s librarian, the late Al Harmon, discovered that this obscure bark from the North of England had been one of the ships that came to San Francisco in the Gold Rush year 1849. &quot;Finding her,&quot; said Scott Newhall, at that time editor of the San Francisco Chronicle, &quot;was equivalent to finding the bead necklace that bought Manhattan.&quot; Prince Philip of England, and Frank G. G. Carr, the author of England&#39;s Maritime Trust, shared the enthusiasm of the vessel&#39;s American discoverers. Through the good offices of Alan Burrough, CBE, distiller of Beefeater Gin, the ship was sold to the National Society in this country for $1, by the Falkland Islands Company, as a gift in

honor of the two hundredth birthday of the United States. (The dollar involved in the transaction was given by Scott Newhall.) In the spring of 1976, a team from the National Society visited the Vicar in her lonely berth on a beach in the Falklands . They came away convinced that salvage is a practical proposition-and eminently worthwhile. The Ship The Vicar of Bray was built by Robert Hardy in Whitehaven in the County of Cumberland, England, in 1841. Her original registered tonnage was 281, which was .later altered to 347 .69, and then to 364. As originally built, she was 97 feet on deck, by 24&#39;3&quot; wide, by 16&#39;10&quot; depth in hold. She was lengthened, apparently in 1859, to 120 feet overall, or approximately 115 feet on deck. This corresponds to measurements made of the actual ship in the Falklands in the spring of 1976. The last change in tonnage was apparently accomplished by increasing the size of her hatch coamings, in 1877. The Vicar belongs to a period in ship