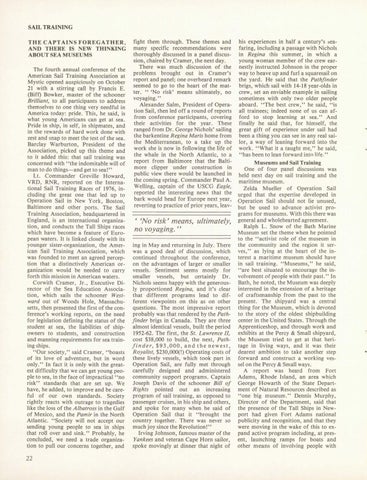 SAIL TRAINING THE CAPTAINS FOREGATHER, AND THERE IS NEW THINKING ABOUT SEA MUSEUMS The fourth annual conference of the American Sail Training Association at Mystic opened auspiciously on October 21 with a stirring call by Francis E. (Bift) Bowker, master of the schooner Brilliant, to all participants to address themselves to one thing very needful in America today: pride. This, he said, is what young Americans can get at sea. Pride in ship, in self, in shipmates, and in the rewards of hard work done with zest and snap to meet the test of the sea. Barclay Warburton, President of the Association, picked up this theme and to it added this: that sail training was concerned with &quot;the indomitable will of man to do things-and get to sea!&quot; Lt. Commander Greville Howard, VRD, RNR, reported on the International Sail Training Races of 1976, including the great one that led up to Operation Sail in New York, Boston, Baltimore and other ports. The Sail Training Association, headquartered in England, is an international organization, and conducts the Tall Ships races which have become a feature of European waters . It is linked closely with its younger sister-organization, the American Sail Training Association, which was founded to meet an agreed perception that a distinctively American organization would be needed to carry forth this mission in American waters . Corwith Cramer, Jr., Executive Director of the Sea Education Association, which sails the schooner Westward out of Woods Hole, Massachusetts, then presented the first of the conference&#39;s working reports, on the need for legislation defining the status of the student at sea, the liabilities of shipowners to students, and construction and manning requirements for sea training ships. &quot;Our society,&quot; said Cramer, &quot;boasts of its love of adventure, but in word only.&quot; In fact it is only with the greatest difficulty that we can get young people to sea, in the face of impractical &quot;no risk&quot; standards that are set up. We have, he added, to improve and be careful of our own standards. Society rightly reacts with outrage to tragedies like the loss of the Albatross in the Gulf of Mexico, and the Pamir in the North Atlantic. &quot;Society will not accept our sending young people to sea in ships that roll over and sink.&quot; Probably, he concluded, we need a trade organization to pull our concerns together, and

fight them through. These themes and many specific recommendations were thoroughly discussed in a panel discussion, chaired by Cramer, the next day. There was much discussion of the problems brought out in Cramer&#39;s report and panel; one overheard remark seemed to go to the heart of the matter. &quot; &#39;No risk&#39; means ultimately, no voyaging.&quot; Alexander Salm, President of Operation Sail, then led off a round of reports from conference participants, covering their activities for the year. These ranged from Dr. George Nichols&#39; sailing the barkentine Regina Maris home from the Mediterranean, to a take up the work she is now in following the life of the whale in the North Atlantic, to a report from Baltimore that the Baltimore clipper under construction in public view there would be launched in the coming spring. Commander Paul A. Welling, captain of the USCG Eagle, reported the interesting news that the bark would head for Europe next year, reverting to practice of prior years, leav-

&#39; &#39;No risk&#39; means, ultimately, no voyaging. &quot; ing in May and returning in July . There was a good deal of discussion, which continued throughout the conference, on the advantages of larger or smaller vessels. Sentiment seems mostly for smaller vessels, but certainly Dr. Nichols seems happy with the generously proportioned Regina, and it&#39;s clear that different programs lead to different viewpoints on this as on other questions. The most impressive report probably was that rendered by the Pathfinder brigs in Canada. They are three almost identical vessels, built the period 1952-62. The first, the St. Lawrence JI, cost $38,000 to build, the next, Pathfinder, $93 ,000 , and the newest, Royalist, $230,000(!) Operating costs of these lively vessels, which took part in Operation Sail, are fully met through carefully designed and administered community support programs. Captain Joseph Davis of the schooner Bill of Rights pointed out an increasing program of sail training, as opposed to passenger cruises, in his ship and others, and spoke for many when he said of Operation Sail that it &#39;&#39;brought the country together. There was never so much joy since the Revolution!&quot; Irving Johnson, famous master of the Yankees and veteran Cape Horn sailor, spoke movingly at dinner that night of

his experiences in half a century&#39;s seafaring, including a passage with Nichols in Regina this summer, in which a young woman member of the crew earnestly instructed Johnson in the proper way to heave up and furl a squaresail on the yard. He said that the Pathfinder brigs, which sail with 14-18 year-olds in crew, set an enviable example in sailing sometimes with only two older people aboard. &quot;The best crew,&quot; he said, &quot;is all trainees; indeed none of us can afford to stop learning at sea.&quot; And finally he said that, for himself, the great gift of experience under sail had been a thing you can see in any real sailor, a way of leaning forward into the work. &quot;What it a taught me,&quot; he said, &quot;has been to lean forward into life .&quot; Museums and Sail Training One of four panel discussions was held next day on sail training and the maritime museum . Zelda Mueller of Operation Sail urged that the expertise developed in Operation Sail should not lie unused, but be used to advance activist programs for museums. With this there was general and wholehearted agreement. Ralph L. Snow of the Bath Marine Museum set the theme when he pointed to the &quot;activist role of the museum in the community and Âˇthe region it serves,&quot; as lying at the heart of the interest a maritime museum should have in sail training. &quot;Museums,&quot; he said, &quot;are best situated to encourage the involvement of people with their past.&quot; In Bath, he noted, the Museum was deeply interested in the extension of a heritage of craftsmanship from the past to the present. The shipyard was a central tbing for the Museum, which is devoted to the story of the oldest shipbuilding center in the United States. Through the Apprenticeshop, and through work and exhibits at the Percy &amp; Small shipyard, the Museum tried to get at that heritage in living ways, and it was their dearest ambition to take another step forward and construct a working vessel on the Percy &amp; Small ways. A report was heard from Fort Adams, Rhode Island, an area which George Howarth of the State Department of Natural Resources described as &quot;one big museum.&quot; Dennis Murphy, Director of the Department, said that the presence of the Tall Ships in Newport had given Fort Adams national publicity and recognition, and that they were moving in the wake of this to expand active program including, at present, launching ramps for boats and other means of involving people with