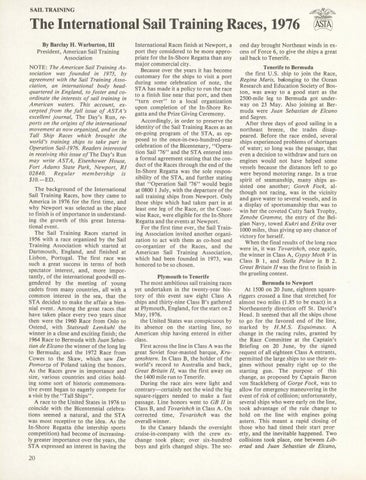 President, American Sail Training Association NOTE: The American Sail Training Association was founded in 1973, by agreement with the Sail Training Association, an international body headquartered in England, to faster and coordinate the interests of sail training in American waters. This account, excerpted from the fall issue of ASTA &#39;s excellent journal, The Day&#39;s Run, reports on the origins of the international movement as now organized, and on the Tall Ship Races which brought the world&#39;s training ships to take part in Operation Sail-1976. Readers interested in receiving this issue of The Day&#39;s Run may write ASTA, Eisenhower House, Fort Adams State Park, Newport, RI 02840. Regular membership is $10.-ED. The background of the International Sail Training Races, how they came to America in 1976 for the first time, and why Newport was selected as the place to finish is of importance in understanding the growth of this great International event. The Sail Training Races started in 1956 with a race organized by the Sail Training Association which started at Dartmouth, Englahd, and finished at Lisbon, Portugal. The first race was such a great success in terms of both spectator interest, and, more importantly, of the international goodwill engendered by the meeting of young cadets from many countries, all with a common interest in the sea, that the ST A decided to make the affair a biennial event. Among the great races that have taken place every two years since then were the 1960 Race from Oslo to Ostend, with Statsradt Lemkuhl the winner in a close and exciting finish; the 1964 Race to Bermuda with Juan Sebastian de Elcano the winner of the long leg to Bermuda; and the 1972 Race from Cowes to the Skaw, which saw Dar Pomorza of Poland taking the honors. As the Races grew in importance and size, various countries and cities holding some sort of historic commemorative event began to eagerly compete for a visit by the &#39;&#39;Tall Ships&#39;&#39;. A race to the United States in 1976 to coincide with the Bicentennial celebrations seemed a natural, and the STA was most receptive to the idea. As the In-Shore Regatta (the intership sports competition) had become of increasingly greater importance over the years, the ST A expressed an interest in having the

International Races finish at Newport, a port they considered to be more appropriate for the In-Shore Regatta than any major commercial city. Because over the years it has become customary for the ships to visit a port during some celebration of note, the ST A has made it a policy to run the race to a finish line near that port, and then &quot;turn over&quot; to a local organization upon completion of the In-Shore Regatta and the Prize Giving Ceremony. Accordingly, in order to preserve the identity of the Sail Training Races as an on-going program of the STA, as opposed to the once-in-two-hundred-year celebration of the Bicentenary, &quot;Operation Sail &#39;76&quot; and the STA entered into a formal agreement stating that the conduct of the Races through the end of the In-Shore Regatta was the sole responsibility of the ST A, and further stating that &quot;Operation Sail &#39;76&quot; would begin at 0800 1 July, with the departure of the sail training ships from Newport. Only those ships which had taken part in at least one leg of the Race, or the Coastwise Race, were eligible for the In-Shore Regatta and the events at Newport. For the first time ever, the Sail Training Association invited another organization to act with them as co-host and co-organizer of the Races, and the American Sail Training Association, which had been founded in 1973, was honored to be so chosen. Plymouth to Tenerife

The most ambitious sail training races yet undertaken in the twenty-year history of this event saw eight Class A ships and thirty-nine Class B&#39;s gathered at Plymouth, England, for the start on 2 May, 1976. the United States was conspicuous by its absence on the starting line, no American ship having entered in either class. First across the line in Class A was the great Soviet four-masted barque, Kruzenshtern. In Class B, the holder of the world&#39;s record to Australia and back, Great Britain II, was the first away on the 1400 mile run to Tenerife. During the race airs were light and contrary-certainly not the wind the big square-riggers needed to make a fast passage. Line honors went to GB II in Class B, and Tovarishch in Class A. On corrected time; Tovarishch was the overall-winner. In the Canary Islands the overnight cruise-in-company with the crew exchange took place; over six-hundred boys and girls changed ships. The sec-

ond day brought Northeast winds in excess of Force 6, to give the ships a great sail back to Tenerife. Tenerife to Bermuda

the first U.S. ship to join the Race, Regina Maris, belonging to the Ocean Research and Education Society of Boston, was away to a good start as the 2500-mile leg to Bermuda got underway on 23 May. Also joining at Bermuda were Juan Sebastian de Elcano and Sagres. After three days of good sailing in a northeast breeze, the trades disappeared. Before the race ended, several ships experienced problems of shortages of water; so long was the passage, that even a decision to withdraw and turn on engines would not have helped some vessels because the distances left to go were beyond motoring range. In a true spirit of seamanship, many ships assisted one another; Gorch Fock, although not racing, was in the vicinity and gave water to several vessels, and in a display of sportsmanship that was to win her the coveted Cutty Sark Trophy, Zenobe Gramme, the entry of the Belgian Navy, towed Kukri and Erika over 1000 miles, thus giving up any chance of victory for herself. When the final results of the long race were in, it was Tovarishch, once again, the winner in Class A, Gypsy Moth Vin Class B 1, and Stella Po/are in B 2. Great Britain II was the first to finish in the grueling contest. Bermuda to Newport

At 1500 on 20 June, eighteen squareriggers crossed a line that stretched, for almost two miles (1.85 to be exact) in a Northeasterly direction off St. David&#39;s Head. It seemed that all the ships chose to go for the favored end of the line, marked by H.M.S. Esquimaux. A change in the racing rules, granted by the Race Committee at the Captain&#39;s Briefing on 20 June, by the signed request of all eighteen Class A entrants, permitted the large ships to use their engines without penalty right up to the starting gun. The purpose of this change, as proposed by Captain Baron von Stackleberg of Gorge Fock, was to allow for emergency maneuvering in the event of risk of collision; unfortunately, several ships who were early on the line, took advantage of the rule change to hold on the line with engines going astern. This meant a rapid closing of those who had timed their start pror erly, and the inevitable happened. Two collisions took place, one between Libertad and Juan Sebastian de Elcano,