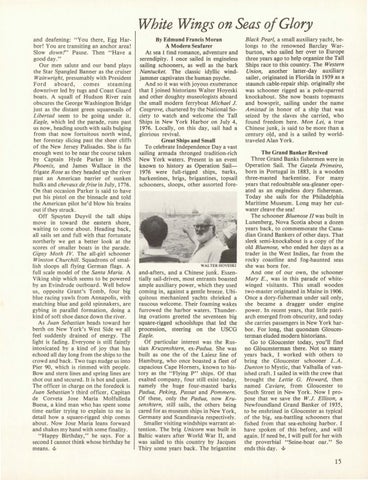 White Wings on Seas of Glory and deafening: "You there, Egg Harbor! You are transiting an anchor area! Slow down!" Pause. Then "Have a good day." Our men salute and our band plays the Star Spangled Banner as the cruiser Wainwright, presumably with President Ford aboard, comes steaming downriver led by tugs and Coast Guard boats. A squall of Hudson River rain obscures the George Washington Bridge just as the distant green squaresails of Libertad seem to be going under it. Eagle, which led the parade, runs past us now, heading south with sails bulging from that now fortuitous north wind, her forestay slicing past the sheer cliffs of the New Jersey Palisades. She is far enough west to be near the course taken by Captain Hyde Parker in HMS Phoenix, and James Wallace in the frigate Rose as they headed up the river past an American barrier of sunken hulks and chevaux de/rise in July, 1776. On that occasion Parker is said to have put his pistol on the binnacle and told the American pilot he'd blow his brains out if they struck. Off Spuyten Duyvil the tall ships move in toward the eastern shore, waiting to come about . Heading back, all sails set and full with that fortunate northerly we get a better look at the scores of smaller boats in the parade. Gipsy Moth IV. The all-girl schooner Winston Churchill. Squadrons of smallish sloops all flying German flags. A full scale model of the Santa Maria. A Viking ship which seems to be powered by an Evindrude outboard. Well below us, opposite Grant's Tomb, four big blue racing yawls from Annapolis, with matching blue and gold spinnakers, are gybing in parallel formation, doing a kind of soft shoe dance down the river. As Juan Sebastian heads toward her berth on New York's West Side we all feel suddenly drained of energy. The light is fading. Everyone is still faintly intoxicated by a kind of joy that has echoed all day long from the ships to the crowd and back. Two tugs nudge us into Pier 90, which is rimmed with people. Bow and stern lines and spring lines are shot out and secured. It is hot and quiet. The officer in charge on the foredeck is Juan Sebastian's third officer, Capitan de Corveta Jose Maria Molfulleda Buesa, a kind man who. has spent some time earlier trying to explain to me in detail how a square-rigged ship comes about. Now Jose Maria leans forward and shakes my hand with some finality. "Happy Birthday," he says. For a second I cannot think whose birthday he means. w

By Edmund Francis Moran A Modern Seafarer At sea I find romance, adventure and serendipity. I once sailed in engineless sailing schooners, as well as the bark Nantucket. The classic idyllic windjammer captivates the human psyche. And so it was with joyous exuberance that I joined historians Walter Hoyeski and other doughty museologists aboard the small modern ferryboat Michael J. Cosgrove, chartered by the National Society to watch and welcome the Tall Ships in New York Harbor on July 4, 1976. Locally, on this day, sail had a glorious revival. Great Ships and Small To celebrate Independence Day a vast sailing armada thronged tradition-rich New York waters. Present in an event known to history as Operation Sail1976 were full-rigged ships, barks, barkentines, brigs, brigantines, topsail schooners, sloops, other assorted fore-

and-afters, and a Chinese junk. Essentially sail-driven, most entrants boasted ample auxiliary power, which they used coming in, against a gentle breeze. Ubiquitous mechanized yachts shrieked a raucous welcome. Their foaming wakes furrowed the harbor waters. Thundering ovations greeted the seventeen big square-rigged schoolships that led the procession, steering on the USCG Eagle. Of particular interest was the Russian Kruzenshtern, ex-Padua. She was built as one the of the Laiesz line of Hamburg, who once boasted a fleet of capacious Cape Homers, known to history as the "Flying P" ships . Of that exalted company, four still exist today, namely the huge four-masted barks Padua, Peking, Passat and Pommern. Of these, only the Padua, now Krusenshtern, still sails, the others being cared for as museum ships in New York, Germany and Scandinavia respectively. Smaller visiting windships warrant attention. The brig Unicorn was built in Baltic waters after World War II, and was sailed to this country by Jacques Thiry some years back. The brigantine

Black Pearl, a small auxiliary yacht, belongs to the renowned Barclay Warburton, who sailed her over to Europe three years ago to help organize the Tall Ships race to this country. The Western Union, another latter-day auxiliary sailer, originated in Florida in 1939 as a staunch cable-repair ship. originally she was schooner rigged as Âˇa pole-sparred knockabout. She now boasts topmasts and bowsprit, sailing under the name Amistad in honor of a ship that was seized by the slaves she carried, who found freedom here. Mon Lei, a true Chinese junk, is said to be more than a century oJd, and is a sailed by worldtraveled Alan York . The Grand Banker Revived Three Grand Banks fishermen were in Operation Sail. The Gaze/a Primeiro, born in Portugal in 1883, is a wooden three-masted barkentine. For many years that redoubtable sea-gleaner operated as an engineless dory fisherman . Today she sails for the Philadelphia Maritime Museum. Long may her cutwater cleave the sea! The schooner Bluenose II was built in Lunenberg, Nova Scotia about a dozen years back, to commemorate the Canadian Grand Bankers of other days. That sleek semi-knockabout is a copy of the old Bluenose, who ended her days as a trader in the West Indies, far from the rocky coastline and fog-haunted seas she was born for. And one of our own, the schooner Mary E., was in this parade of whitewinged visitants. This small wooden two-master originated in Maine in 1906. Once a dory-fisherman under sail only, she became a dragger under engine power. In recent years, that little patriarch emerged from obscurity, and today she carries passengers in New York harbor. For long, that quondam Gloucesterman eluded modern historians. Go to Gloucester today, you'll find no Gl6ucesterman there. Not so many years back, I worked with others to bring the Gloucester schooner L.A . Dunton to Mystic, that Valhalla of vanished craft. I sailed in with the crew that brought the Lettie G. Howard, then named Caviare, from Gloucester to South Street in New York . Now I propose that we save the W.J. Ellison, a Newfoundland Grand Banker of 1935, to be enshrined in Gloucester as typical of the big, sea-battling schooners that fished from that sea-echoing harbor. I have spoken of this before, and will again. If need be, I will pull for her with the proverbial "Seine-boat oar." So ends this day. w