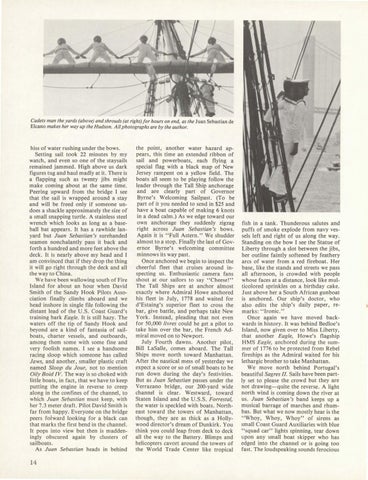 Cadets man the yards (above) and shrouds (at right) for hours on end, as the Juan Sebastian de Elcano makes her way up the Hudson. A II photographs are by the author.

hiss of water rushing under the bows. Setting sail took 22 minutes by my watch, and even so one of the staysails remained jammed. High above us dark figures tug and haul madly at it. There is a flapping such as twenty jibs might make coming about at the same time. Peering upward from the bridge I see that the sail is wrapped around a stay and will be freed only if someone undoes a shackle approximately the size of a small snapping turtle. A stainless steel wrench which looks as long as a baseball bat appears. It has a rawhide lanyard but Juan Sebastian&#39;s surehanded seamen nonchalantly pass it back and forth a hundred and more feet above the deck. It is nearly above my head and I am convinced that if they drop the thing it will go right through the deck and all the way to China. We have been wallowing south of Fire Island for about an hour when David Smith of the Sandy Hook Pilots Association finally climbs aboard and we head inshore in single file following the distant lead of the U .S. Coast Guard&#39;s training bark Eagle. It is still hazy. The waters off the tip of Sandy Hook and beyond are a kind of fantasia of sailboats, charter vessels, and outboards, among them some with some fine and very foolish names. I see a handsome racing sloop which someone has called Jaws, and another, smaller plastic craft named Sloop du lour, not to mention Oily Boid IV. The way is so choked with little boats, in fact, that we have to keep putting the engine in reverse to creep along in the confines of the channel, to which Juan Sebastian must keep, with her 7 :3 meter draft. Pilot David Smith is far from happy. Everyone on the bridge peers forward looking for a black can that marks the first bend in the channel. It pops into view but then is maddeningly obscured again by clusters of sailboats. As Juan Sebastian heads in behind

the point, another water hazard appears, this time an extended ribbon of sail and powerboats, each flying a special flag with a black map of New Jersey rampent on a yellow field. The boats all seem to be playing follow the leader through the Tall Ship anchorage and are clearly part of Governor Byrne&#39;s Welcoming Sailpast. (To be part of it you needed to send in $25 and have a boat capable of making 6 knots in a dead calm.) As we edge toward our own anchorage they suddenly zigzag right across Juan Sebastian&#39;s bows. Again it is &quot;Full Astern.&quot; We shudder almost to a stop. Finally the last of Governor Byrne&#39;s welcoming committee minnows its way past. Once anchored we begin to inspect the cheerful fleet that cruises around inspecting us . Enthusiastic camera fans shout at our sailors to say &quot;Cheese!&quot; The Tall Ships are at anchor almost exactly where Admiral Howe anchored his fleet in July, 1778 and waited for d&#39;Estaing&#39;s superior fleet to cross the bar, give battle, and perhaps take New York. Instead, pleading that not even for 50,000 livres could he get a pilot to take him over the bar, the French Admiral moved on to Newport. July Fourth dawns. Another pilot, Bill LaSalle, comes aboard. The Tall Ships move north toward Manhattan. After the nautical mess of yesterday we expect a score or so of small boats to be run down during the day&#39;s festivities. But as Juan Sebastian passes under the Verrazano bridge, our 200-yard wide channel is clear. Westward, toward Staten Island and the U.S.S. Forrestal, the water is speckled with boats. Northeast toward the towers of Manhattan, though, they are as thick as a Hollywood director&#39;s dream of Dunkirk. You think you could leap from deck to deck all the way to the Battery. Blimps and helicopters cavort around the towers of the World Trade Center like tropical

fish in a tank. Thunderous salutes and puffs of smoke explode from navy vessels left and right of us along the way. Standing on the bow I see the Statue of Liberty through a slot between the jibs, her outline faintly softened by feathery arcs of water from a red fireboat. Her base, like the stands and streets we pass all afternoon, is crowded with people whose faces at a distance, look like multicolored sprinkles on a birthday cake. Just above her a South African gunboat is anchored. Our ship&#39;s doctor, who also edits the ship&#39;s daily paper, remarks: &quot;Ironic.&quot; Once again we have moved backwards in history. It was behind Bedloe&#39;s Island, now given over to Miss Liberty, that another Eagle, Howe&#39;s flagship HMS Eagle, anchored during the summer of 1776 to be protected from Rebel fireships as the Admiral waited for hiS lethargic brother to take Manhattan. We move north behind Portugal&#39;s beautiful Sagres II. Sails have been partly set to please the crowd but they are not drawing-quite the reverse. A light north wind is coming down the river at us. Juan Sebastian&#39;s band keeps up a musical barrage of marches and rhumbas. But what we now mostly hear is the &quot;Whoy, Whoy, Whoy&quot; of sirens as small Coast Guard Auxiliaries with blue &quot;squad car&quot; lights spinning, tear down upon any small boat skipper who has edged into the channel or is going too fast. The loudspeaking sounds ferocious