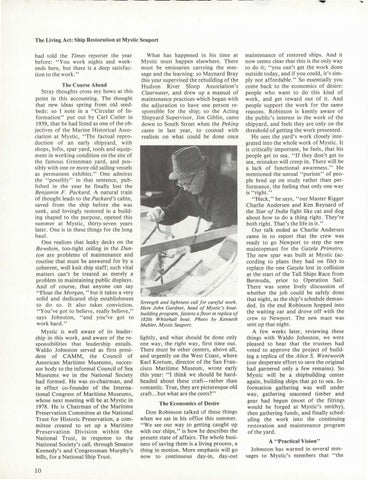 The Living Act: Ship Restoration at Mystic Seaport had told the Times reporter the year before: &quot;You work nights and weekends here, but there is a deep satisfaction to the work.&quot; The Course Ahead Stray thoughts cross my bows at this point in this accounting. The thought that new ideas spring from old seedbeds: so I note in a &quot;Circular of Information&quot; put out by Carl Cutler in 1939, that he had listed as one of the objectives of the Marine Historical Association at Mystic, &quot;The factual reproduction of an early shipyard, with shops, lofts, spar yard, tools and equipment in working condition on the site of the famous Greenman yard, and possibly with one or more old sailing vessels as permanent exhibits.&quot; One admires the &quot;possibly&quot; in that sentence, published in the year he finally lost the Benjamin F. Packard. A natural train of thought leads to the Packard&#39;s cabin, saved from the ship before she was sunk, and lovingly restored in a building shaped to the purpose, opened this summer at Mystic, thirty-seven years later. One is in these things for the long haul. One realizes that leaky decks on the Bowdoin, too-tight ceiling in the Dunton are problems of maintenance and routine that must be answered for by a coherent, well knit ship staff; such vital matters can&#39;t be treated as merely a problem in maintaining public displays. And of course, that anyone can say &quot;Float the Morgan, &quot;but it takes a very solid and dedicated ship establishment to do so. It also takes conviction. &quot;You&#39;ve got to believe, really believe,&quot; says Johnston, &quot;and you&#39;ve got to work hard.&quot; Mystic is well aware of its leadership in this work, and aware of the responsibilities that leadership entails. Waldo Johnston served as first president of CAMM, the Council of American Maritime Museums, successor body to the informal Council of Sea Museums we in the National Society had formed. He was co-chairman, and in effect co-founder of the International Congress of Maritime Museums, whose next meeting will be at Mystic in 1978. He is Chairman of the Maritime Preservation Committee at the National Trust for Historic Preservation, a committee created to set up a Maritime Preservation Division within the National Trust, in response to the National Society&#39;s call, through Senator Kennedy&#39;s and Congressman Murphy&#39;s bills, for a National Ship Trust.

What has happened in his time at Mystic must happen elsewhere. There must be emissaries carrying the message and the learning: so Maynard Bray this year supervised the rebuilding of the Hudson River Sloop Association&#39;s Clearwater, and drew up a manual of maintenance practices which began with the adjuration to have one person responsible for the ship; so the Acting Shipyard Supervisor, Jim Giblin, came down to South Street when the Peking came in last year, to counsel with realism on what could be done once

lightly, and what should be done only one way, the right way, first time out. There must be other centers, above all, and urgently on the West Coast, where Karl Kortum, director of the San Francisco Maritime Museum, wrote early this year: &quot;I think we should be hardheaded about these craft-rather than romantic. True, they are picturesque old craft...but what are the costs?&quot; The Economics of Desire Don Robinson talked of these things when we sat in his office this summer. &quot;We see our way to getting caught up with our ships,&quot; is how he describes the present state of affairs. The whole business of saving them is a living process, a thing in motion. More emphasis will go now to continuous day-in, day-out

maintenance of restored ships. And it now seems clear that this is the only way to do it; &quot;you can&#39;t get the work done outside today, and if you could, it&#39;s simply not affordable.&quot; So essentially you come back to the economics of desire: people who want to do this kind of work, and get reward out of it. And people support the work for the same reasons. Robinson is keenly aware of the public&#39;s interest in the work of the shipyard, and feels they are only on the threshold of getting the work presented. He sees the yard&#39;s work closely integrated into the whole work of Mystic. It is critically important, he feels, that his people get to sea. &quot;If they don&#39;t get to sea, mistakes will creep in. There will be a lack of functional awareness.&quot; He mentioned the unreal &#39;&#39;purism&#39;&#39; of people bred up on study rather than performance, the feeling that only one way is &quot;right.&quot; &quot;Heck,&quot; he says, &quot;our Master Rigger Charlie Andersen and Ken Reynard of the Star of India fight like cat and dog about how to do a thing right. They&#39;re both right. That&#39;s the life in it.&quot; Our talk ended as Charlie Andersen came in to report that the crew was ready to go Newport to step the new maintopmast for the Gaze/a Primeiro. The new spar was built at Mystic (according to plans they had on file) to replace the one Gaze/a lost in collision at the start of the Tall Ships Race from Bermuda, prior to Operation Sail. There was some lively discussion of whether the job could be safely done that night, as the ship&#39;s schedule demanded. In the end Robinson hopped into the waiting car and drove off with the crew to Newport. The new mast was sent up that night. A few weeks later, reviewing these things with Waldo Johnston, we were pleased to hear that the trustees had voted to approve the project of building a replica of the Alice S. Wentworth (our desperate effort to save the original had garnered only a few remains). So Mystic will be a shipbuilding center again, building ships that go to sea. Information gathering was well under way, gathering seasoned timber and gear had begun (most of the fittings would be;: forged at Mystic&#39;s smithy), then gathering funds, and finally scheduling the work into the continuing restoration and maintenance program of the yard. A &quot;Practical Vision&quot; Johnston has warned in several messages to Mystic&#39;s members that &quot;the