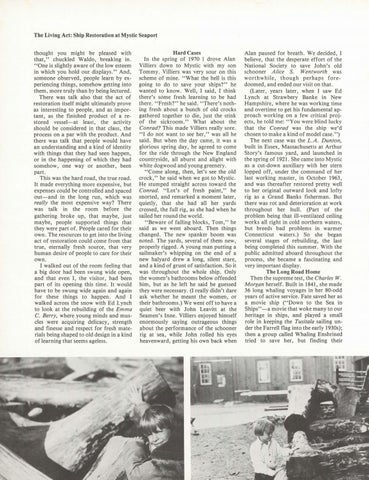 The Living Act: Ship Restoration at Mystic Seaport thought you might be pleased with that,&quot; chuckled Waldo, breaking in. &quot;One is slightly aware of the low esteem in which you hold our displays .&quot; And, someone observed, people learn by experiencing things, somehow getting into them, more truly than by being lectured. There was talk also that the act of restoration itself might ultimately prove as interesting to people, and as important, as the finished product of a restored vessel-at least, the activity should be considered in that class, the process on a par with the product. And there was talk that people would have an understanding and a kind of identity with things that they had seen happen, or in the happening of which they had somehow, one way or another, been part. This was the hard road, the true road. It made everything more expensive, but expenses could be controlled and spaced out-and in the long run, which was really the most expensive way? There was talk in the room before the gathering broke up, that maybe, just maybe, people supported things that they were part of. People cared for their own. The resources to get into the living act of restoration could come from that true, eternally fresh source, that very human desire of people to care for their own. I walked out of the room feeling that a big door had been swung wide open, and that even I, the visitor, had been part of its opening this time. It would have to be swung wide again and again for these things to happen. And I walked across the snow with Ed Lynch to look at the rebuilding of the Emma C. Berry, where young minds and muscles were acquiring delicacy, strength and finesse and respect for fresh materials being shaped to old design in a kind of learning that seems ageless.

Hard Cases In the spring of 1970 I drove Alan Villiers down to Mystic with my son Tommy. Villiers was very sour on this scheme of mine. &quot;What the hell is this going to do to save your ship~?&quot; he wanted to know. Well, I said, I think there&#39;s some fresh learning to be had there. &quot;Fresh?&quot; he said. &quot;There&#39;s nothing fresh about a bunch of old crocks gathered together to die, just the stink of the sickroom.&quot; What about the Conrad? This made Villiers really sore. &quot;I do not want to see her,&quot; was all he said. But when the day came, it was a glorious spring day, he agreed to come for the ride through the New England countryside, all aburst and alight with white dogwood and young greenery. &quot;Come along, then, let&#39;s see the old crock,&quot; he said when we got to Mystic. He stumped straight across toward the Conrad. &quot;Lot&#39;s of fresh paint,&quot; he snorted, and remarked a moment later, quietly, that she had all her yards crossed, the full rig, as she had when he sailed her round the world. &quot;Beware of falling blocks, Tom,&quot; he said as we went aboard. Then things changed. The new spanker boom was noted. The yards, several of them new, properly rigged. A young man putting a sailmaker&#39;s whipping on the end of a new halyard drew a long, silent stare, and a kind of grunt of satisfaction. So it was throughout the whole ship. Only the women&#39;s bathrooms below offended him, but as he left he said he guessed they were necessary. (I really didn&#39;t dare ask whether he meant the women, or their bathrooms.) We went off to have a quiet beer with John Leavitt at the Seamen&#39;s Inne. Villiers enjoyed himself enormously saying outrageous things about the performance of the schooner rig at sea, while John rolled his eyes heavenward, getting his own back when

Alan paused for breath. We decided, I believe, that the desperate effort of the National Society to save John&#39;s old schooner Alice S. Wentworth was worthwhile, though perhaps foredoomed, and ended our visit on that. (Later, years later, when I saw Ed Lynch at Strawbery Banke in New Hampshire, where he was working time and overtime to get his fundamental approach working on a few critical projects, he told me: &quot;You were blind lucky that the Conrad was the ship we&#39;d chosen to make a kind of model case.&quot;) The next case was the L.A. Dunton, built in Essex, Massachusetts at Arthur Story&#39;s famous yard, and launched in the spring of 1921. She came into Mystic as a cut-down auxiliary with her stern lopped off, under the command of her last working master, in October 1963, and was thereafter restored pretty well to her original outward look and lofty rig as a Grand Banks fisherman. But there was rot and deterioration at work throughout her hull. (Part of the problem being that ill-ventilated ceiling works all right in cold northern waters, but breeds bad problems in warmer Connecticut waters.) So she began several stages of rebuilding, the last being completed this summer. With the public admitted aboard throughout the process, she became a fascinating and very important display. The Long Road Home Then the supreme test, the Charles W. Morgan herself. Built in 1841, she made 36 long whaling voyages in her 80-odd years of active service. Fate saved her as a movie ship (&quot;Down to the Sea in Ships&#39; &#39;-a movie that woke many to our heritage in ships, and played a small role in keeping the Tusitala sailing under the Farrell flag into the early 1930s); then a group called Whaling Enshrined tried to save her, but finding their