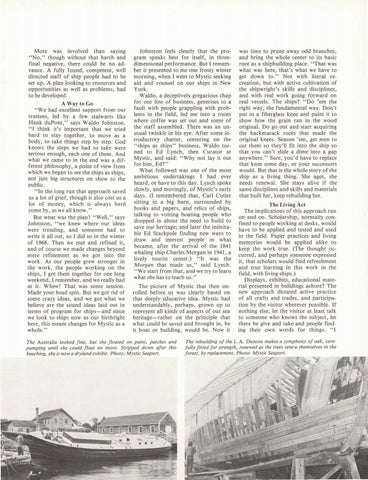 More was involved than saying &quot;No,&quot; though without that harsh and final negative, there could be no advance. A fully found, competent, well directed staff of ship people had to be set up. A plan looking to resources and opportunities as well as problems, had to be developed. A Way to Go

&quot;We had excellent support from our trustees, led by a few stalwarts like Hank duPont,&quot; says Waldo Johnston. &quot;I think it&#39;s important that we tried hard to stay together, to move as a body, to take things step by step. God knows the steps we had to take were serious enough, each one of them. And what we came to in the end was a different philosophy, a point of view from which we began to see the ships as ships, not just big structures on show to the public. &quot;In the long run that approach saved us a lot of grief, though it also cost us a lot of money, which is always hard come by, as we all know.&quot; But what was the plan? &quot;Well,&quot; says Johnston, &quot;we knew where our ideas were trending, and someone had to write it all out, so I did so in the winter of 1968. Then we met and refined it, and of course we made changes beyond mere refinement as we got into the work. As our people grew stronger in the work, the people working on the ships, I got them together for one long weekend, I remember, and we really had at it. Whew! That was some session. Made your head spin. But we got rid of some crazy ideas, and we got what we believe are the sound ideas laid out in terms of program for ships-and since we look to ships now as our birthright here, this meant changes for Mystic as a whole.&quot;

Johnston feels clearly that the program speaks best for itself, in threedimensional performance. But I remember it presented to me one frosty winter morning, when I went to Mystic seeking aid and counsel on our ships in New York. Waldo, a deceptively gregarious chap for our line of business, generous to a fault with people grappling with problems in the field, led me into a room where coffee was set out and some of the staff assembled. There was an unusual twinkle in his eye. After some introductory chatter, centering on the &quot;ships as ships&quot; business, Waldo turned to Ed Lynch, then Curator at Mystic, and said: &quot;Why not lay it out for him, Ed?&quot; What followed was one of the most ambitious undertakings I had ever heard, or have to this day. Lynch spoke slowly, and movingly, of Mystic&#39;s early days. (I remembered that, Carl Cutler sitting in a big barn, surrounded by books and papers, and relics of ships, talking to visiting boating people who dropped in about the need to build to save our heritage; and later the inimitable Ed Stackpole finding new ways to draw and interest people in what became, after the arrival of the 1841 whaling ship Charles Morgan in 1941, a lively tourist center.) &quot;It was the Morgan that made us,&quot; said Lynch. &quot;We start from that, and we try to learn what she has to teach us.&quot; The picture of Mystic that then unrolled before us was clearly based on that deeply educative idea. Mystic had understandably, perhaps, grown up to represent all kinds of aspects of our sea heritage-rather on the principle that what could be saved and brought in, be it boat or building, would be. Now it

The Australia looked fine, but she floated on paint, patches and pumping until she could float no more. Stripped down after this beaching, she is now a dry/and exhibit. Photo: Mystic Seaport.

was time to prune away odd branches, and bring the whole center to its basic root as a shipbuilding place. &quot;That was what was here, that&#39;s what we have to get down to.&quot; Not with literal recreation, but with active cultivation of the shipwright&#39;s skills and disciplines, and with real work going forward on real vessels. The ships? &quot;Do &#39;em the right way, the fundamental way. Don&#39;t put in a fiberglass knee and paint it to show how the grain ran in the wood original. Do go out and start acquiring the hackmatack roots that made the original knees. Season &#39;em, get men to cut them so they&#39;ll fit into the ship so that you can&#39;t slide a dime into a gap anywhere.&quot; Sure, you&#39;d have to replace that knee some day, or your successors would. But that is the whole story of the ship as a living thing. She ages, she needs renewal. She stays alive if the same disciplines and skills and materials that built her, keep rebuilding her. The Living Act The implications of this approach ran on and on. Scholarship, normally confined to people working at desks, would have to be applied and tested and used in the field. Paper practices and living memories would be applied alike to keep the work true. (The thought occurred, and perhaps someone expressed it, that scholars would find refreshment and true learning in this work in the field, with living ships.) Displays, exhibits, educational material presented in buildings ashore? The new approach dictated active practice of all crafts and trades, and participation by the visitor wherever possible. If nothing else, let the visitor at least talk to someone who knows the subject, let there be give and take and people finding their own words for things. &quot;I

The rebuilding of the L.A. Dunton makes a symphony of oak, carefully fitted for strength, renewed as the trees renew themselves in the forest, by replacement. Photo: Mystic Seaport. &quot;/