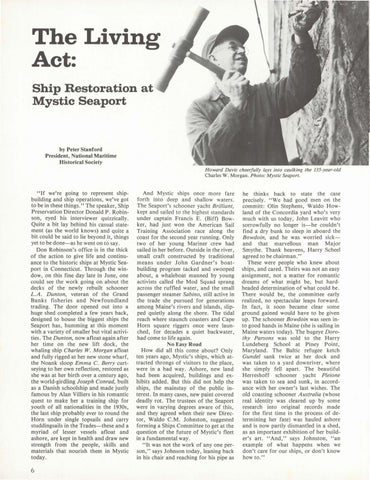 &quot;If we&#39;re going to represent shipbuilding and ship operations, we&#39;ve got to be in these things.&quot; The speaker, Ship Preservation Director Donald P. Robinson, eyed his interviewer quizzically. Quite a bit lay behind his casual statement (as the world knows) and quite a bit could be said to lie beyond it, things yet to be done-as he went on to say. Don Robinson&#39;s office is in the thick of the action to give life and continuance to the historic ships at Mystic Seaport in Connecticut. Through the window, on this fine day late in June, one could see the work going on about the decks of the newly rebuilt schooner L.A. Dunton, veteran of the Grand Banks fisheries and Newfoundland trading. The door opened out into a huge shed completed a few years back, designed to house the biggest ships the Seaport has, humming at this moment with a variety of smaller but vital activities . The Dunton, now afloat again after her time on the new lift dock, the whaling ship Charles W. Morgan afloat and fully rigged at her new stone wharf, the Noank sloop Emma C. Berry curtseying to her own reflection, restored as she was at her birth over a century ago, the world-girdling Joseph Conrad, built as a Danish schoolship and made justly famous by Alan Villiers in his romantic quest to make her a training ship for youth of all nationalities in the 1930s, the last ship probably ever to round the Horn under single topsails and carry studdingsails in the Trades-these and a myriad of lesser vessels afloat and ashore, are kept in health and draw new strength from the people, skills and materials that nourish them in Mystic today.

And Mystic ships once more fare forth into deep and shallow waters. The Seaport&#39;s schooner yacht Brilliant, kept and sailed to the highest standards under captain Francis E. (Biff) Bowker, had just won the American Sail Training Association race along the coast for the second year running. Only two of her young Mariner crew had sailed in her before. Outside in the river, small craft constructed by traditional means under John Gardner&#39;s boatbuilding program tacked and swooped about, a whaleboat manned by young activists called the Mod Squad sprang across the ruffled water, and the small passenger steamer Sabino, still active in the trade she pursued for generations among Maine&#39;s rivers and islands, slipped quietly along the shore. The tidal reach where staunch coasters and Cape Horn square riggers once were launched, for decades a quiet backwater, had come to life again. No Easy Road How did all this come about? Only ten years ago, Mystic&#39;s ships, which attracted throngs of visitors to the place, were in a bad way. Ashore, new land had been acquired, buildings and exhibits added . But this did not help the ships, the mainstay of the public interest. In many cases, new paint covered deadly rot. The trustees of the Seaport were in varying degrees aware of this, and they agreed when their new Director, Waldo C.M. Johnston, suggested forming a Ships Committee to get at the question of the future of Mystic&#39;s fleet in a fundamental way. &quot;It was not the work of any one person,&quot; says Johnson today, leaning back in his chair and reaching for his pipe as

he thinks back to state the case precisely. &quot;We had good men on the committ: Olin Stephens, Waldo Howland of the Concordia yard who&#39;s very much with us today, John Leavitt who sorrowfully no longer is-he couldn&#39;t find a dry bunk to sleep in aboard the Bowdoin, and he was worried sickand that marvellous man Major Smythe. Thank heavens, Harry Scheel agreed to be chairman.&quot; These were people who knew about ships, and cared. Theirs was not an easy assignment, not a matter for romantic dreams of what might be, but hardheaded determination of what could be . There would be, the committee early realized, no spectacular leaps forward . In fact, it soon became clear some ground gained would have to be given up. The schooner Bowdoin was seen into good hands in Maine (she is sailing in Maine waters today). The bugeye Dorothy Parsons was sold to the Harry Lundeberg School at Piney Point, Maryland. The Baltic refugee ketch Gunde/ sank twice at her dock and was taken to a yard downriver, where she simply fell apart. The beautiful Herreshoff schooner yacht Pleione was taken to sea and sunk, in accordance with her owner&#39;s last wishes. The old coasting schooner Australia (whose real identity was cleared up by some research into original records made for the first time in the process of determining her fate) was hauled ashore and is now partly dismantled in a shed, as an important exhibition of her builder&#39;s art. &quot;And,&quot; says Johnston, &quot;an example of what happens when we don&#39;t care for our ships, or don&#39;t know how to.&quot;