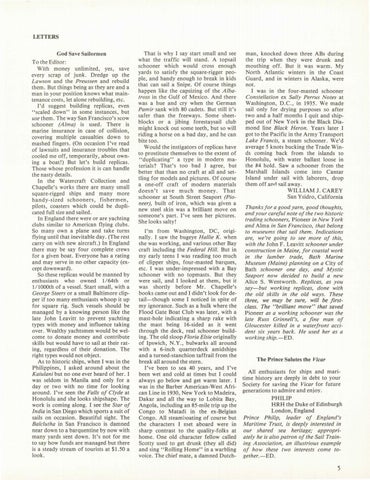 LEITE RS God Save Sailormen To the Editor: With money unlimited, yes, save every scrap of junk. Dredge up the Lawson and the Preussen and rebuild them. But things being as they are and a man in your position knows what maintenance costs, let alone rebuilding, etc. I&#39;d suggest building replicas, even &quot;scaled down&quot; in some instances, but use them. The way San Francisco&#39;s scow schooner (Alma) is used. There is marine insurance in case of collision, covering multiple casualties down to mashed fingers. (On occasion I&#39;ve read of lawsuits and insurance troubles that cooled me off, temporarily, about owning a boat!) But let&#39;s build replicas. Those whose profession it is can handle the nasty details. In the Watercraft Collection and Chapelle&#39;s works there are many small square-rigged ships and many more handy-sized schooners, fishermen, pilots, coasters which could be duplicated full size and sailed. In England there were or are yachting clubs similar to American flying clubs. So many own a plane and take turns flying until that inevitable day. (The rest carry on with new aircraft.) In England there may be say four complete crews for a given boat. Everyone has a rating and may serve in no other capacity (except downward). So these replicas would be manned by enthusiasts who owned l/64th or l/lOOOth of a vessel. Start small, with a George Steers or a small Baltimore clipper if too many enthusiasts whoop it up for square rig. Such vessels should be managed by a knowing person like the late John Leavitt to prevent yachting types with money and influence taking over. Wealthy yachtsmen would be welcome to donate money and contribute skills but would have to sail at their rating, regardless of their donation. The right types would not object. As to historic ships, when I was in the Philippines, I asked around about the Kaiulani but no one ever heard of her. I was seldom in Manila and only for a day or two with no time for looking around. I&#39;ve seen the Falls of Clyde at Honolulu and she looks shipshape. The work is coming along. I see the Star of India in San Diego which sports a suit of sails on occasion. Beautiful sight. The Balclutha in San Francisco is damned near down to a barquentine by now with many yards sent down. It&#39;s not for me to say how funds are managed but there is a steady stream of tourists at $1.50 a look.

That is why I say start small and see what the traffic will stand. A topsail schooner which would cross enough yards to satisfy the square-rigger people, and handy enough to break in kids that can sail a Snipe. Of course things happen like the capsizing of the Albatross in the Gulf of Mexico. And there was a hue and cry when the German Pamir sank with 80 cadets. But still it&#39;s safer than the freeways. Some sheetblocks or a jibing forestaysail club might knock out some teeth, but so will riding a horse on a bad day, and he can bite too. Would the instigators of replicas have to prostitute themselves to the extent of &quot;duplicating&quot; a type in modern materials? That&#39;s too bad I agree, but better that than no craft at all and settling for models and pictures. Of course a one-off craft of modern materials doesn&#39;t save much money . That schooner at South Street Seaport (Pioneer), built of iron, which was given a new steel skin was a brilliant move on someone&#39;s part. I&#39;ve seen her pictures. She looks salty!

man, knocked down three ABs during the trip when they were drunk and mouthing off. But it was warm. My North Atlantic winters in the Coast Guard, and in winters in Alaska, were not. I was in the four-masted schooner Constellation ex Sally Perrus Notes at Washington, D.C., in 1935 . We made sail only for drying purposes so after two and a half months I quit and shipped out of New York in the Black Diamond line Black Heron. Years later I got to the Pacific in the Army Transport Lake Francis, a steam schooner. We&#39;d average 5 knots bucking the Trade Winds coming back from the islands to Honolulu, with water ballast loose in the #4 hold. Saw a schooner from the Marshall Islands come into Cantar Island under sail with laborers, drop them off an cl sail away. WILLIAM J. CAREY San Ysidro, California

Thanks for a good yarn, good thoughts, and your careful note of the two historic trading schooners, Pioneer in New York and Alma in San Francisco, that belong to museums that sail them. Indications are, we&#39;re going to see more of this, with the John F. Leavitt schooner under construction in Maine, for coastal work in the lumber trade, Bath Marine Museum (Maine) planning on a City of Bath schooner one day, and Mystic Seaport now decided to build a new Alice S. Wentworth. Replicas, as you say-but working replicas, done with the old skills in the old ways. These three, we may be sure, will be firstclass. The &quot;brilliant move&quot; that saved Pioneer as a working schooner was the late Russ Grinnell&#39;s, a fine man of Gloucester killed in a waterfront accident six years back. He used her as a working ship.-ED.

I&#39;m from Washington, DC, originally. I saw the bugeye Hallie K. when she was working, and various other Bay craft including the Federal Hill. But in my early teens I was reading too much of clipper ships, four-masted barques, etc. I was under-impressed with a Bay schooner with no topmasts. But they were sail, and I looked at them, but it was shortly before Mr. Chapelle&#39;s books came out and I didn&#39;t look for detail-though some I noticed in spite of my ignorance. Such as a hulk where the Flood Gate Boat Club was later, with a mast-hole indicating a sharp rake with the mast being 16-sided as it went through the deck, real schooner building. The old sloop Floria Elsie originally of Ipswich, N.Y., bulwarks all around with a 6-inch quarterdeck amidships and a turned-stanchion taffrail from the The Prince Salutes the Vicar break all around the stern. I&#39;ve been to sea 40 years, and I&#39;ve All enthusiasts for ships and maribeen wet and cold at times but I could time history are deeply in debt to your always go below and get warm later. I was in the Barber American-West Afri- Society for saving the Vicar for future can Line in 1930, New York to Madeira, generations to admire and enjoy. PHILIP Dakar and all the way to Lobita Bay, HRH the Duke of Edinburgh Angola, including an 85-mile trip up the London, England Congo to Matadi in the ex-Belgian Congo. All steamlioating of course but Prince Philip, leader of England&#39;s the characters I met aboard were in Maritime Trust, is deeply interested in sharp contrast to the quality-folks at our shared sea heritage; approprihome. One old character fellow called ately he is also patron of the Sail TrainScotty used to get drunk (they all did) ing Association, an illustrious example and sing &quot;Rolling Home&quot; in a warbling of how these two interests come tovoice. The chief mate, a damned Dutch- gether. -ED.