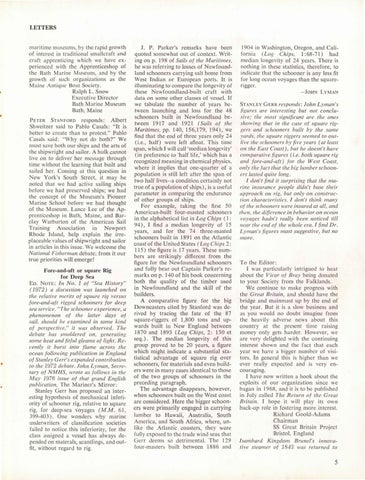 LETTERS maritime museums, by the rapid growth of interest in traditional smallcraft and craft apprenticing which we have experienced with the Apprenticeshop of the Bath Marine Museum, and by the growth of such organizations as the Maine Antique Boat Society. Ralph L. Snow Executive Director Bath Marine Museum Bath, Maine PETER STANFORD responds: Albert Shweitzer said to Pablo Casals: &quot;It is better to create than to protest.&quot; Pablo Casals said: &quot;Why not do both?&quot; We must save both our ships and the arts of the shipwright and sailor. A hulk cannot live on to deliver her message through time without the learning that built and sailed her. Coming at this question in New York&#39;s South Street, it may be noted that we had active sailing ships before we had preserved ships; we had the concept of the Museum&#39;s Pioneer Marine School before we had thought of the Museum. Lance Lee of the Apprenticeshop in Bath, Maine, and Barclay Warburton of the American Sail Training Association in Newport Rhode Island, help explain the irreplaceable values of shipwright and sailor in articles in this issue. We welcome the National Fisherman debate; from it our true priorities will emerge! Fore-and-aft or square Rig for Deep Sea Eo. Norn: In No. 1 of &quot;Sea History&quot; ( 1972) a discussion was launched on the relative merits of squure rig versus fore-and-a/ t rigged schooners for deep sea service. &quot;The schooner experience, a phenomenon of the latter days of sail, should be examined in some kind of perspective,&quot; it was observed. The debate has smoldered on, generating some heat and fitful gleams of light. Recently it burst into flame across the ocean following publication in England of Stanley Gerr&#39;s expanded contribution to the 1972 debate. John Lyman, Secretary of NMHS, wrote as follows in th e May 1976 issue of that grand English publication, The Mariner&#39;s Mirror: Stanley Gerr has proposed an interesting hypothesis of mechanical inferiority of schooner rig, relative to square rig, for deep-sea voyages ( M.M. 61, 399-403). One wonders why marine underwriters of classification societies failed to notice this inferiority, for the class assigned a vessel has always depended on materals, scantlings, and outfit, without regard to rig.

J. P. Parker&#39;s remarks have been quoted somewhat out of context. Writing on p. 198 of Sails of the Maritimes, he was referring to losses of Newfoundland schooners carrying salt home from West Indian or European ports. It is illuminating to compare the longevity of these Newfoundland-built craft with data on some other classes of vessel. If we tabulate the number of years between launching and loss for the 48 schooners built in Newfoundland between 1917 and 1921 (Sails of the Maritimes, pp. 140, 156,179, 194), we find that the end of three years only 24 (i.e., half) were left afloat. This time span, which I will call &#39;median longevity&#39; (in preference to &#39;half life,&#39; which has a recognized meaning in chemical physics, where it implies that one-quarter of a population is still left after the span of two half lives-a condition certainly not true of a population of ships), is a useful parameter in comparing the endurance of other groups of ships. For example, taking the first 50 American-built four-masted schooners in the alphabetical list in Log Chips ( 1: 94), I find a median longevity of 15 years, and for the 74 three-masted schooners built in 1891 on the Atlantic coast of the United States (Log Chips 2: 115) the figure is 17 years. These numbers are strikingly different from the figure for the Newfoundland schooners and fully bear out Captain Parker&#39;s remarks on p. 140 of his book concerning both the quality of the timber used in Newfoundland and the skill of the builders. A comparative figure for the big Downeasters cited by Stanford was derived by tracing the fate of the 87 square-riggers of 1,800 tons and upwards built in New England between 1870 and 1893 (Log Chips, 2: 130 et seq.). The median longevity of this group proved to be 20 years, a figure which might indicate a substantial statistical advantage of square rig over schooners, for materials and even builders were in many cases identical to those of the two groups of schooners in the preceding paragraph. The advantage disappears, however, when schooners built on the West coast are considered. Here the bigger schooners were primarily engaged in carrying lumber to Hawaii, Australia, South America, and South Africa, where, unlike the Atlantic coasters, they were fully exposed to the trade wind seas that Gerr deems so detrimental. The 129 four-masters built between 1886 and

1904 in Washington, Oregon, and California (Log Chips, 1:68-71) had median longevity of 24 years. There is nothing in these statistics, therefore, to indicate that the schooner is any less fit for long ocean voyages than the squarerigger. - JOHN LYMAN STANLEY GERR responds: John Lyman&#39;s figures are interesting but not conclusive; th e most significant are the ones showing that in the case of square riggers and schooners built by the same yards, th e square riggers seemed to outlive the schooners by five years (at least on the East Coast), but he doesn&#39;t have comparative figures (i.e. both square rig and fore-and-aft) for the West Coast, only th e fact that the big lumber schooners lasted quite long. I don&#39;t find it surprising that the marine insurance people didn&#39;t base their approach on rig, but only on construction characteristics. I don&#39;t think many of the schooners were insured at all, and then, the difference in behavior on ocean voyages hadn&#39;t really been noticed till near th e end of the whole era. I find Dr. Lyman&#39;s figures most suggestive, but no more.

To the Editor: I was particularly intrigued to hear about the Vicar of Bray being donated to your Society from the Falklands. We continue to make progress with the Great Britain, and should have the bridge and mainmast up by the end of the year. But it is a slow business and as you would no doubt imagine from the heavily adverse news about this country at the present time raising money only gets harder. However, we are very delighted with the continuing interest shown and the fact that each year we have a bigger number of visitors. In general this is higher than we ever really expected and is very encouraging. I have now written a book about the exploits of our organization since we bagan in 1968, and it is to be published in July called The R eturn of th e Great Britain. I hope it will play its own back-up role in fostering more interest. Richard Goold-Adams Chairman SS Great Britain Project Bristol, England lsambard Kingdom. Brunel&#39;s innovative steamer of 1843 was returned to