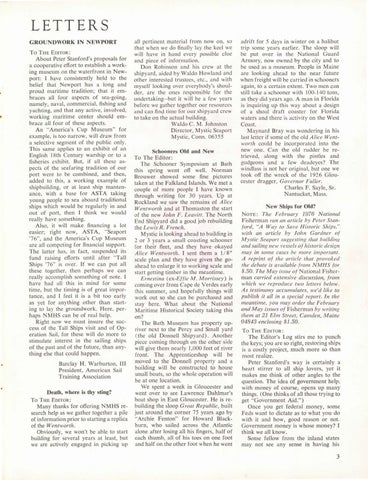 LETTERS GROUNDWORK IN NEWPORT To THE EDITOR: About Peter Stanford&#39;s proposals for a cooperative effort to establish a working museum on the waterfront in Newport: I have consistently held to the belief that Newport has a long and proud maritime tradition; that it embraces all four aspects of sea-going, namely, naval, commercial, fishing and yachting, and that any active, involved, working maritime center should embrace all four of these aspects. An &quot;America&#39;s Cup Museum&quot; for example, is too narrow, will draw from a selective segment of the public only. This same applies to an exhibit of an English 18th Century warship or to a fisheries exhibit. But, if all these aspects of the seafaring tradition of our port were to be combined, and then, added to this, a working example of shipbuilding, or at least ship mantenance, with a base for ASTA taking young people to sea aboard traditional ships which would be regularly in and out of port, then I think we would really have something. Also, it will make financing a lot easier; right now, ASTA, &quot;Seaport &#39;76&quot;, and the America&#39;s Cup Museum are all competing for financial support. The latter has, in fact, suspended its fund raising efforts until after &quot;Tall Ships &#39;76&quot; is over. If we can put all these together, then perhaps we can really accomplish something of note. I have had all this in mind for some time, but the timing is of great importance, and I feel it is a bit too early as yet for anything other than starting to lay the groundwork. Here, perhaps NMHS can be of real help. Right now we must insure the success of the Tall Ships visit and of Operation Sail, for these will do more to stimulate interest in the sailing ships of the past and of the future, than anything else that could happen. Barclay H. Warburton, III President, American Sail Training Association Death, where is thy sting? To THE EDITOR: Many thanks for offering NMHS research help as we gather together a pile of information prior to starting a replica of the Wentworth. Obviously, we won&#39;t be able to start building for several years at least, but we are actively engaged in picking up

all pertinent material from now on, so that when we do finally lay the keel we will have in hand every possible clue and piece of information. Don Robinson and his crew at the shipyard, aided by Waldo Howland and other interested trustees, etc., and with myself looking over everybody&#39;s shoulder, are the ones responsible for the undertaking-but it will be a few years before we gather together our resources and can find time for our shipyard crew to take on the actual building. Waldo C. M. Johnston Director, Mystic Seaport Mystic, Conn. 06355 Schooners Old and New To The Editor: The Schooner Symposium at Bath this spring went off well. Norman Brouwer showed some fine pictures taken at the Falkland Islands. We met a couple of more people I have known through writing for 30 years. Up at Rockland we saw the remains of Alice Wentworth and at Thomaston the start of the new John F. Leavitt. The North End Shipyard did a good job rebuilding the Lewis R. French. Mystic is looking ahead to building in 2 or 3 years a small coasting schooner for their fleet, and they have okayed Alice Wentworth. I sent them a 1/8 11 scale plan and they have given the goahead to enlarge it to working scale and start getting timber in the meantime. Ernestina (ex-Effie M. Morrissey) is coming over from Cape de Verdes early this summer, and hopefully things will work out so she can be purchased and stay here. What about the National Maritime Historical Society taking this on? The Bath Muse.um has property upriver next to the Percy and Small yard (the old Donnell Shipyard). Another piece coming through on the other side will give them nearly 1,000 feet of river front. The Apprenticeshop will be moved to the Donnell property and a building will be constructed to house small boats, so the whole operation will be at one location. We spent a week in Gloucester and went over to see Lawrence Dahlmar&#39;s boat shop in East Gloucester. He is rebuilding the sloop Great Republic, built just around the corner 75 years ago by &quot;Archie Fenton&quot; for Howard Blackburn, who sailed across the Atlantic alone after losing all his fingers, half of each thumb, all of his toes on one foot and half on the other foot when he went

adrift for 5 days in winter on a halibut trip some years earlier. The sloop will be put over in the National Guard Armory, now owned by the city and to be used as a museum. People in Maine are looking ahead to the near future when freight will be carried in schooners again, to a certain extent. Two men can still take a schooner with 100-140 tons, as they did years ago. A man in Florida is inquiring up this way about a design of a shoal draft coaster for Florida waters and there is activity on the West Coast. Maynard Bray was wondering in his last letter if some of the old Alice Wentworth could be incorporated into the new one. Can the old rudder be retrieved, along with the pintles and gudgeons and a few deadeyes? The windlass is not her original, but one we took off the wreck of the 1926 Gloucester dragger, Governor Fuller. Charles F. Sayle, Sr. Nantucket, Mass. New Ships for Old? NOTE: The February 1976 National Fisherman ran an article by Peter Stanford, &quot;A Way to Save Historic Ships,&quot; with an article by John Gardner of Mystic Seaport suggesting that building and sailing new vessels of historic design may in some cases be more important. A reprint of the article that provoked the debate is available from NMHS for $.50. The May issue of National Fisherman carried extensive discussion, from which we reproduce two letters below. As testimony accumulates, we&#39;d like to publish it all in a special report. In the meantime, you may order the February and May issues of Fisherman by writing them at 21 Elm Street, Camden, Maine 04843 enclosing $1.50. To THE EDITOR: The Editor&#39;s Log stirs me to punch the keys; you are so right, restoring ships is a costly project, much more so than most realize. Peter Stanford&#39;s way is certainly a heart stirrer to all ship lovers, yet it makes me think of other angles to the question. The idea of government help, with money of course, opens up many things. (One thinks of all those trying to get &quot;Government Aid.&quot;) Once you get federal money, some Feds want to dictate as to what you do with it and how, good reason or not. Government money is whose money? I think we all know. Some fellow from the inland states may not see any sense in having his