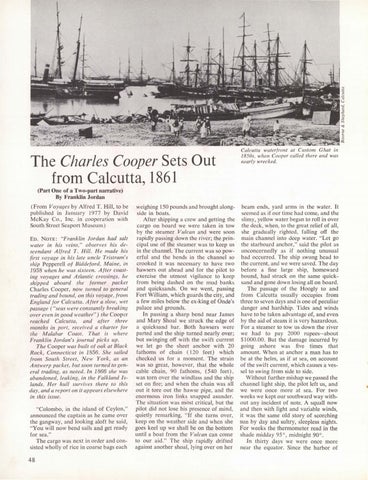 The Charles Cooper Sets Out from Calcutta, 1861 (Part One of a Two-part narrative) By Franklin Jordan

(From Voyages by Alfred T. Hill, to be published in January 1977 by David McKay Co., Inc. in cooperation with South Street Seaport Museum)

Eo. Norn: &quot;Franklin Jordan had salt water in his veins,&quot; observes his descendant Alfred T. Hill. He made his first voyage in his late uncle Tristram&#39;s ship Pepperell of Biddeford, Maine, in 1958 when he was sixteen. After coasting voyages and Atlantic crossings, he shipped aboard the former packet Charles Cooper, now turned to general trading and bound, on this voyage, from England for Calcutta. After a slow, wet passage (&quot;seas were constantly breaking over even in good weather&quot;) the Cooper reached Calcutta, and after three months in port, received a charter for the Malabar Coast. That is where Franklin Jordan&#39;s journal picks up. The Cooper was built of oak at Black Rock, Connecticut in 1856. She sailed from South Street, New York, as an Antwerp packet, but soon turned to general trading, as noted. In 1866 she was abandoned, leaking, in the Falkland Islands. Her hull survives there to this day, and a report on it appears elsewhere in this issue. &quot;Colombo, in the island of Ceylon,&quot; announced the captain as he came over the gangway, and looking aloft he said, &quot;You will now bend sails and get ready for sea.&quot; The cargo was next in order and consisted wholly of rice in coarse bags each

weighing 150 pounds and brought alongside in boats. After shipping a crew and getting the cargo on board we were taken in tow by the steamer Vulcan and were soon rapidly passing down the river; tpe principal use of the steamer was to keep us · in the channel. The current was so powerful and the bends in the channel so crooked it was necessary to have two hawsers out ahead and for the pilot to exercise the utmost vigilance to keep from being dashed on the mud banks and quicksands. On we went, passing Fort William, which guards the city, and a few miles below the ex-king of Onde&#39;s palace and grounds. In passing a sharp bend near James and Mary Shoal we struck the edge of a quicksand bar. Both hawsers were parted and the ship turned nearly over; but swinging off with the swift current we let go the sheet anchor with 20 fathoms of chain ( 120 feet) which checked us for a moment. The strain was so great, however, that the whole cable chain, 90 fathoms, (540 feet) , was torn over the windlass and the ship set on fire; and when the chain was all out it tore out the hawse pipe, and the enormous iron links snapped asunder. The situation was most critical, but the pilot did not lose his presence of mind, quietly remarking, &quot;If she turns over, keep on the weather side and when she goes keel up we shall be on the bottom until a boat from the Vulcan can come to our aid.&quot; The ship rapidly drifted against another shoal, lying over on her

beam ends, yard arms in the water. It seemed as if our time had come, and the slimy, yellow water began to roll in over the deck, when, to the great relief of all, she gradually righted, falling off the main channel into deep water. &quot;Let go the starboard anchor,&quot; said the pilot as unconcernedly as if nothing unusual had occurred. The ship swung head to the current, and we were saved. The day before a fine large ship, homeward bound, had struck on the same quicksand and gone down losing all on board. The passage of the Hoogly to and from Calcutta usually occupies from three to seven days and is one of peculiar danger and hardship. Tides and winds have to be taken advantage of, and even by the aid of steam it is very hazardous. For a steamer to tow us down the river we had to pay 2000 rupees-about $1000.00. But the damage incurred by going ashore was five times that amount. When at anchor a man has to be at the helm, as if at sea, on account of the swift current, which causes a vessel to swing from side to side. Without further mishap we passed the channel light ship, the pilot left us, and we were once more at sea. For two weeks we kept our southward way without any incident of note. A squall now and then with light and variable winds, it was the same old story of scorching sun by day and sultry, sleepless nights. For weeks the thermometer read in the shade midday 95°, midnight 90°. In thirty days we were once more near the equator. Since the harbor of