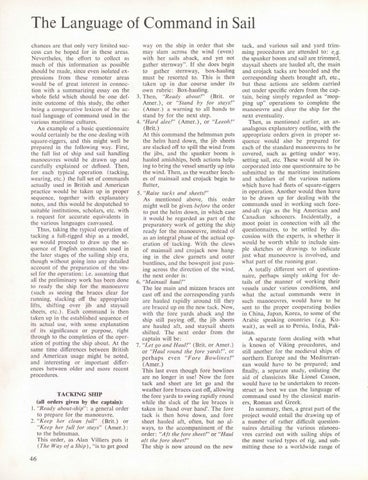 The Language of Command in Sail chances are that only very limited success can be hoped for in these areas. Nevertheles, the effort to collect as much of this information as possible should be made, since even isolated expressions from these remoter areas would be of great interest in connection with a summarizing essay on the whole field which should be one definite outcome of this study, the other being a comparative lexicon of the actual language of command used in the various maritime cultures. An example of a basic questionnaire would certainly be the one dealing with square-riggers, and this might well be prepared in the following way. First, the full list of ship and sail handling manoeuvres would be drawn up and carefully explained or defined. Then, for each typical operation (tacking, wearing, etc.) the full set of commands actually used in British and American practice would be taken up in proper sequence, together with explanatory notes, and this would be despatched to suitable institutions, scholars, etc. with a request for accurate equivalents in the various languages canvassed. Thus, taking the typical operation of tacking a full-rigged ship as a model , we would proceed to draw up the sequence of English commands used in the later stages of the sailing ship era, though without going into any detailed account of the preparation of the vessel for the operation: i.e. assuming that all the preliminary work has been done to ready the ship for the manoeuvre (such as seeing the braces clear for running, slacking off the appropriate lifts, shifting over jib and staysail sheets, etc.) . Each command is then taken up in the established sequence of its actual use, with some explanation of its significance or purpose, right through to the completion of the operation of putting the ship about. At the same time differences between British and American usage might be noted, and interesting or important differences between older and more recent procedures. TACKING SHIP (all orders given by the captain): I. "Ready about-ship": a general order to prepare for the manoeuvre. 2. "Keep her clean full" (Brit.) or "Keep her full for stays" (Amer.): to the helmsman . This order, as Alan Villiers puts it (The Way of a Ship), " is to get good

way on the ship in order that she may slam across the wind (even) with her sails aback, and yet not gather sternway". If she does begin to gather sternway, box-hauling must be resorted to. This is then taken up in due course under its own rubric: Box-hauling. 3. Then, "R eady about!" (Brit. or Amer.), or "Stand by for stays!" (Amer.) a warning to all hands to stand by for the next step. 4. "Hard alee!" (Amer.), or "Leeoh!" (Brit.) At this command the helmsman puts the helm hard down, the jib sheets are slacked off to spill the wind from the jibs, and the spanker boom is hauled amidships, both actions helping to bring the vessel smartly up into the wind. Then, as the weather leeches of mainsail and crojack begin to flutter, 5. "Raise tacks and sheets!" As mentioned above, this order might well be given before the order to put the helm down, in which case it would be regarded as part of the preparatory work of getting the ship ready for the manoeuvre, instead of as an integral phase of the actual operation of tacking. With the clews of mainsail and crojack now hanging in the clew garnets and outer buntlines, and the bowsprit just pas-sing across the direction of the wind, the next order is : 6. "Mainsail haul!" The lee main and mizzen braces are cast off and the corresponding yards are hauled rapidly around till they are braced up on the new tack. Now, with the fore yards aback and the ship still paying off, the jib sheets are hauled aft, and staysail sheets shifted. The next order from the captain will be: 7. "L et go and Haul!'' (Brit. or Amer.) or "Haul round the fore yards!", or perhaps even "Fore Bowlines!" (Amer.) This last even though fore bowlines are no longer in use! Now the fore tack and sheet are let go and the weather fore braces cast off, allowing the fore yards to swing rapidly round while the slack of the lee braces is taken in 'hand over hand'. The fore tack is then hove down, and fore sheet hauled aft, often, but no always, to the accompaniment of the order: "Aft the fore sheet!" or "Haul aft the fore sheet!" The ship is now around on the new

tack, and various sail and yard trimming procedures are attended to: e:g. the spanker boom and sail are trimmed, staysail sheets are hauled aft, the main and crojack tacks are boarded and the corresponding sheets brought aft, etc., but these actions are seldom carried out under specific orders from the captain, being simply regarded as "mopping up" operations to complete the manoeuvre and clear the ship for the next eventuality. ~ Then, as mentioned earlier, an ananalagous explanatory outline, with the appropriate orders given in proper sequence would also be prepared for each of the standard manoeuvres to be covered, such as getting unde!' way, setting sail, etc. These would all be incorporated into one questionnaire to be submitted to the maritime institutions and scholars of the various nations which have had fleets of square-riggers in operation. Another would then have to be drawn up for dealing with the commands used in working such foreand-aft rigs as the big American and Canadian schooners. Incidentally, a moot point in connection with all the questionnaires, to be settled by discussion with the experts, is whether it would be worth while to include simple sketches or drawings to indicate just what manoeuvre is involved, and what part of the running gear. A totally different sort of questionnaire, perhaps simply asking for details of the manner of working their vessels under various conditions, and what the actual commands were in such manoeuvres, would have to be sent to the proper cooperating bodies in China, Japan, Korea, to some of the Arabic speaking countries (e.g. Kuwait), as well as to Persia, India, Pakistan. A separate form dealing with what is known of Viking procedures, and still another for the medieval ships of northern Europe and the Mediterranean would have to be prepared; and finally, a separate study, enlisting the aid of classicists like Lionel Casson, would have to be undertaken to reconstruct as bes t we can the language of command used by the classical mariners, Roman and Greek. In summary, then, a great part of the project would entail the drawing up of a number of rather difficult questionnaires detailing the various manoeuvres carried out with sailing ships of the most varied types of rig, and submitting these to a worldwide range of