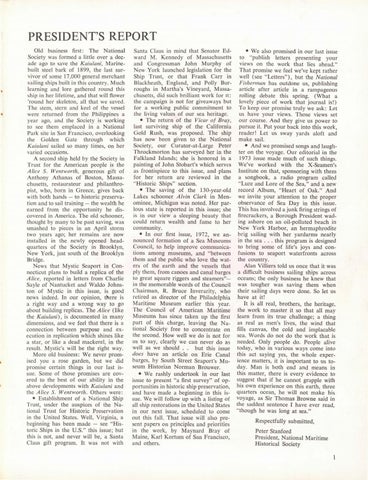 PRESIDENT&#39;S REPORT Old business first: The National Society was formed a little over a decade ago to save the Kaiulani, Marinebuilt steel bark of 1899, the last survivor of some 17 ,000 general merchant sailing ships built in this country. Much learning and lore gathered round this ship in her lifetime, and that will flower &#39;round her skeleton, all that we saved. The stem, stern and keel of the vessel were returned from the Philippines a year ago, and the Society is working to see them emplaced in a National Park site in San Francisco, overlooking the Golden Gate through which Kaiulani sailed so many times, on her varied occasions. A second ship held by the Society in Trust for the American people is the Alice S. Wentworth , generous gift of Anthony Athanas of Boston, Massachusetts, restaurateur and philanthropist, who, born in Greece, gives back with both hands - to historic preservation and to sail training - the wealth he earned from the opportunity he discovered in America. The old schooner, thought by many to be past saving, was smashed to pieces in an April storm two years ago; her remains are now installed in the newly opened headquarters of the Society in Brooklyn, New York, just south of the Brooklyn Bridge. News that Mystic Seaport in Connecticut plans to build a replica of the Alice, reported in letters from Charlie Sayle of Nantucket and Waldo Johnston of Mystic in this issue, is good news indeed. In our opinion, there is a right way and a wrong way to go about building replicas. The Alice (like the Kaiulani) , is documented in many dimensions, and we feel that there is a connection between purpose and execution in replication which shines like a star, or like a dead mackerel, in the result. Mystic&#39;s will be the right way. More old business: We never promised you a rose garden, but we did promise certain things in our last issue. Some of those promises are covered to the best of our ability in the above developments with Kaiu/ani and the Alice S . Wentworth. Others were: • Establishment of a N ational Ship Trust, under the auspices of the National Trust for Historic Preservation in the United States. Well, Virginia, a beginning has been made - see &quot;Historic Ships in the U.S.&quot; this issue; but this is not, and never will be, a Santa Claus gift program. It was not with

Santa Claus in mind that Senator Edward M. Kennedy of Massachusetts and Congressman John Murphy of New York launched legislation for the Ship Trust, or that Frank Carr in Blackheath, England, and Polly Burroughs in Martha&#39;s Vineyard, Massachusetts, did such brilliant work for 1t: the campaign is not for giveaways but for a working public commitment to the living values of our sea heritage . • The return of the Vicar of Bray, last surviving ship of the California Gold Rush, was proposed. The ship has now been given to the National Society, our Curator-at-Large Peter Throckmorton has surveyed her in the Falkland Islands; she is honored in a painting of John Stobart&#39;s which serves as frontispiece to this issue, and plans for her return are reviewed in the &quot;Historic Ships&quot; section. • The saving of the 130-year-old Lakes schooner Alvin Clark in Menominee, Michigan was noted. Her parlous state is reported in this issue; she is in our view a sleeping beauty that could return wealth and fame to her community. • In our first issue, 1972, we announced formation of a Sea Museums Council, to help improve communications among museums, and &quot;between them and the public who love the waters of the earth and the vessels that ply them, from canoes and canal barges to great square riggers and steamers&quot;in the memorable words of the Council Chairman, R. Bruce Inverarity, who retired as director of the Philadelphia Maritime Museum earlier this year. The Council of American Maritime Museums has since taken up the first part of this charge, leaving the National Society free to concentrate on the second. How well we do is not for us to say, clearly we can never do as well as we should . . but this issue does have an article on Erie Canal barges, by South Street Seaport&#39;s Museum Historian Norman Brouwer. • We rashly undertook in our last issue to present &quot;a first survey&quot; of opportunities in historic ship preservation, and have made a beginning in this issue. We will follow up with a listing of all ship restorations in the United States in our next issue, scheduled to come out this fall. That issue will also present papers on principles and priorities in the work, by Maynard Bray of Maine, Karl Kortum of San Francisco, and others.

• We also promised in our last issue to &quot;publish letters presenting your views on the work that lies ahead.&quot; That promise we feel we&#39;ve kept rather well (see &quot;Letters&quot;), but the National Fish erman has outdone us, publishing article after article in a rampageous rolling debate this spring. (What a lovely piece of work that journal is!) To keep our promise truly we ask: Let us have your views. Those views set our course. And they give us power to pursue it. Put your back into this work, reader! Let us sway yards aloft and make sail. • And we promised songs and laughter on the voyage. Our editorial in the 1973 issue made much of such things. We&#39;ve worked with the X-Seamen&#39;s Institute on that, sponsoring with them a songbook, a radio program called &quot;Lure and Lore of the Sea,&quot; and a new record Album, &quot;Heart of Oak.&quot; And we invite your attention to the proper observance of Sea Day in this issue. This has involved a junk firing strings of firecrackers, a Borough President wading ashore on an oil-polluted beach in New York Harbor, an hermaphrodite brig sailing with her yardarms nearly in the sea . .. this program is designed to bring some of life&#39;s joys and confusions to seaport waterfronts across the country. Alan Villiers told us once that it was a difficult business sailing ships across oceans; the only business he knew that was tougher was saving them when their sailing days were done. So let us have at it! It is all real, brothers, the heritage, the work to master it so that all may learn from its true challenge; a thing as real as men&#39;s lives, the wind that fills canvas, the cold and implacable sea. Words do not do the work that is needed. Only people do. People alive today, who in various ways come into this act saying yes, the whole experience matters, it is important to us today. Man is both end and means in this matter, there is every evidence to suggest that if he cannot grapple with his own experience on this earth, three quarters ocean, he will not make his voyage, as Sir Thomas Browne said in the saddest sentence I have ever read, &quot;though he was long at sea.&quot; Respectfully submitted, Peter Stanford President, National Maritime Historical Society