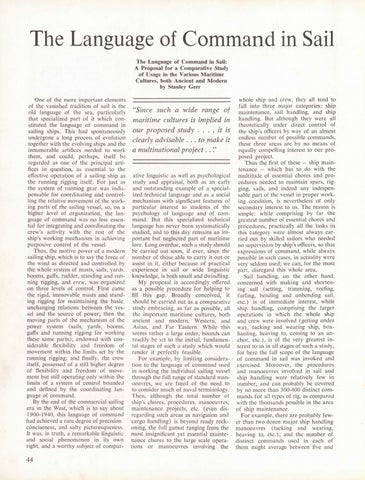 One of the more important elements of the vanished tradition of sai l is the old language of the sea, particularly that specialized part of it which constituted the language of command in sailing ships. This had spontaneously undergone a long process of evolution together with the evolving ships and the innumerable artifices needed to work them, and could, perhaps, itself be regarded as one of the principal artifices in question, as essential to the effective operation of a sailing ship as the running rigging itself. For just as the system of running gear was indispensable for coordinating and controlling the relative movement of the working parts of the sailing vessel, so, on a higher level of organization, the language of command was no less essential for integrating and coordinating the crew's activity with the rest of the ship's working mechanism in achieving purposive control of the vessel. Thus, the motive power of a modern sailing ship, which is to say the force of the wind as directed and controlled by the whole system of masts, sails, yards, booms, gaffs, rudder, standing and running rigging, and crew, was organized on three levels of control. First came the rigid, immovable masts and stand ing rigging for maintaining the basic, unchanging relations between the vessel and the source of power; then the moving parts of the mechanism of the power system (sails, yards, booms, gaffs and running rigging for working these same parts), endowed with considerable flexibility and freedom of movement within the limits set by the running rigging; and finally, the crew itself, possessed of a still higher degree of flexibility and freedom of movement but still operating only within the limits of a system of control bounded and defined by the coordinating language of command. By the end of the commercial sailing era in the West, which is to say about 1900-1940, this langu age of command had achieved a rare degree of precision conciseness, and salty picturesqueness. It was, in truth, a remarkable linguistic and social phenomenon in its own right, and a worthy subject of compar-

"Since such a wide range of maritime cultures is implied in our proposed study ... , it is clearly advisable ... to make it a multinational project .. '.'

ative linguistic as well as psychological stud y and appraisal, both as an early and outstanding example of a specialized technical language and as a social mechanism with significant features of particular interest to students of the psychology of language and of command. But this specialized technical language has never been systematically studied, and to this day remains an important but neglected part of maritime Jore. Long overdue, such a study should be carried out soon, if ever, since the number of those able to carry it out or assist in it, either because of practical experience in sail or wide linguistic knowledge, is both small and dwindling. My proposal is accordingly offered as a possible procedure for helping to fill this gap. Broadly conceived, it should be carried out as a comparative study embracing, as far as possible, all the important maritime cultures, both ancient and modern, Western, and Asian, and Far Eastern. While this seems rather a large order, bounds can readily be set to the initial, fundamental stages of such a study which would render it perfectly feasible. For example, by limiting consideration to the language of command used in working the individual sailing vessel through the full range of standard manoeuvres, we are freed of the need to to consider much of naval terminology. Then , although the total number of ship's chores, procedures, manoeuvres, maintenance projects, etc. (even disregarding such areas as navigation and cargo handling) is beyond ready reckoning, the full gamut ranging from the most insignificant yet essential maintenance chores to the large scale operations or manoeuvres involving the

whole ship and crew, they all tend to fall into three major categories: ship maintenance, sail handling, and ship handling. But although they were all theoretically under direct control of the ship's officers by way of an almost endless number of possible commands, these three areas are by no means of equally compelling interest to our proposed project. Thus the first of these - ship maintenance - which has to do with the multitude of essential chores and procedures needed to maintain spars, rigging, sai ls, and indeed any indespensable part of the vessel in proper working condition, is nevertheless of only secondary interest to us. The reason is simple: while comprising by far the greatest number of essential chores and procedures, practically all the tasks in this category were almost always carried out by skilled sailors who needed no supervision by ship's officers, so that expressions of command, while always possible in such cases, in actuality were very seldom used; we can, for the most part, disregard this whole area. Sail handling, on the other hand , concerned with making and shortening sail (setting, trimming, reefing, furling, bending and unbending sail , etc.) is of immediate interest, while ship handling, comprising the larger operations in which the whole ship and crew were involved (getting under way, tacking and wearing ship, boxhauling, heaving to, coming to an anchor, etc.) , is of the very greatest interest to us in all stages of such a study, for here the full scope of the language of command in sail was invoked and exercised. Moreover, the procedures and manoeuvres involved in sail and ship handling were relatively few in number, and can probably be covered by no more than 300-400 distinct commands for all types of rig, as compared with the thousands possible in the area of ship maintenance. For example, there are probably fewer than two dozen major ship handling manoeuvres (tacking and wearing, heaving to, etc.), and the number of distinct commands used in each of them might average between five and