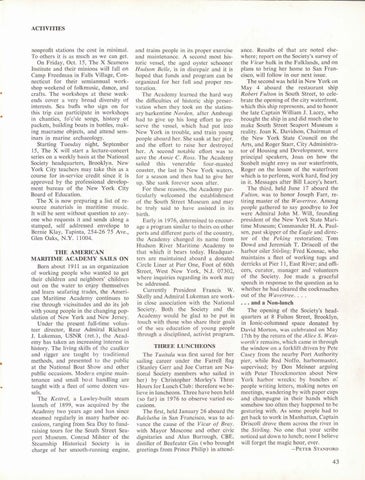 nonprofit stations the cost in minimal. To others it is as much as we can get. On Friday, Oct. 15, The X Seamens Institute and their minions will fall on Camp Freedman in Falls Village, Connecticut for their semiannual workshop weekend of folkmusic, dance, and crafts. The workshops at these weekends cover a very broad diversity of interests. Sea buffs who sign on for this trip can participate in workshops in chanties, fo&#39;c&#39;sle songs, history of packets, building boats in bottles, making macrame objects, and attend seminars in marine archaeology. Starting Tuesday night, September 15, The X will start a lecture-concert series on a weekly basis at the National Society headquarters, Brooklyn. New York City teachers may take this as a course for in-service credit since it is approved by the professional development bureau of the New York City Board of Education. The X is now preparing a list of resource materials in maritime music. It will be sent without question to anyone who requests it and sends along a stamped, self addressed envelope to Bernie Klay, Tapinta, 254-26 75 Ave., Glen Oaks, N.Y. 11004.

THE AMERICAN MARITIME ACADEMY SAILS ON Born about 1911 as an organization of working people who wanted to get their children and neighbors&#39; children out on the water to enjoy themselves and learn seafaring trades, the American Maritime Academy continues to rise through vicissitudes and do its job with young people in the changing population of New York and New Jersey. Under the present full-time volunteer director, Rear Admiral Richard J. Lukeman, USNR (ret.), the Academy has taken an increasing interest in history. The living skills of the caulker and rigger are taught by traditional methods, and presented to the public at the National Boat Show and other public occasions. Modern engine m aintenance and small bo at handling are taught with a fleet of some dozen vessels. The Kestrel, a Lawley-built steam launch of 1899, was acquired by the Academy two years ago and has since steamed regularly in many harbor occasions, ranging from Sea Day to fundraising tours for the South Street Seaport Museum. Conrad Milster of the Steamship Historical Society is in charge of her smooth-running engine,

and trains people in its proper exercise and maintenance. A second most historic vessel, the aged oyster schooner Hudson Belle, is in disrepair and it is hoped that funds and program can be organized for her full and proper restoration. The Academy learned the hard way the difficulties of historic ship preservation when they took on the stationary barkentine Norden , after Ambrogi had to give up his long effort to preserve the vessel , which had put into New York in trouble, and train young people aboard her. She sank at her pier, and the effort to raise her destroyed her. A second notable effort was to save the Annie C. Ross. The Academy sailed this venerable four-masted coaster, the last in New York waters, for a season and then had to give her up. She sank forever soon after. For these reasons, the Academy particularly welcomed the establishment of the South Street Museum and may be truly said to have assisted in its birth. Early in 1976, determined to encourage a program similar to theirs on other ports and different parts of the country, the Academy changed its name from Hudson River M aritime Academy to that which it bears today. Headquarters are maintained aboard a donated Circle Liner at Pier One, Foot of 60th Street, West New York, N .J. 07302, where inquiries regarding its work may be addressed. Currently President Francis W. Skelly and Admiral Lukeman are workin close association with the National Society. Both the Society and the Academy would be glad to be put in touch with those who share their goals of the sea education of young people through a disciplined, activist program.

THREE LUNCHEONS The Tusitala was first saved for her sailing career under the Farrell flag (Stanley Gerr and Joe Curran are National Society members who sailed in her) by Christopher Morley&#39;s Three Hours for Lunch Club: therefore we believe in luncheons. Three have been held (so far) in 1976 to observe varied occasions. The first, held January 26 aboard the Balclutha in San Francisco, was to advance the cause of the Vicar of Bray, with Mayor Moscone and other civic dignitaries and Alan Burrough, CBE, distiller of Beefeater Gin (who brought greetings from Prince Philip) in attend-

ance. Results of that are noted elsewhere; report on the Society&#39;s survey of the Vicar hulk in the Falklands, and on plans to bring her home to San Francisco, will follow in our next issue. The second was held in New York on May 4 aboard the restaurant ship Robert Fulton in South Street, to celebrate the opening of the city waterfront, which this ship represents, and to honor the late Captain William J. Lacey, who brought the ship in and did much else to make South Street Seaport Museum a reality. Joan K. Davidson, Chairman of the New York State Council on the Arts, and Roger Starr, City Administrator of Housing and Development, were principal speakers, Joan on how the Sunbelt might envy us our waterfronts, Roger on the lesson of the waterfront which is to perform, work hard, find joy in it. Messages after Bill Lacey&#39;s heart. The third, held June 17 aboard the Fulton, was to honor Joseph Farr, retiring master of the Wavertree . Among people gathered to say goodbye to Joe were Admiral John M. Will, founding president of the New York State Maritime Museum; Commander H. A. Paulsen, past skipper of the Eagle and director of the Peking restoration; Tom Dowd and Jeremiah T. Driscoll of the harbor oiler Stirling; Fred Kosnac, who maintains a fleet of working tugs and derricks at Pier 11, East River; and officers, curator, manager and volunteers of the Society. Joe made a graceful speech in response to the question as to whether he had cleared the cockroaches out of the Wavertree . ... ... and a Non-lunch The opening of the Society&#39;s headquarters at 8 Fulton Street, Brooklyn, in Ionic-columned space donated by David Morton, was celebrated on May 17th by the return of the Alice S . Westworth&#39;s remains, which came in through the window on a forklift driven by Pete Casey from the nearby Port Authority pier, while Red Noffo, harbormaster, supervised; by Don Meisner arguing with Peter Throckmorton about New York harbor wrecks; by bunches o ~Âˇ people writing letters, making notes on meetings, wandering by with paper cups and champagne in their hands which somehow too often they happened to be gesturing with . As some people had to get back to work in Manhattan, Captain Driscoll drove them across the river in the Stirling. No one that your scribe noticed sat down to lunch; none I believe will forget the magic hour, ever. -PETER STANFORD .