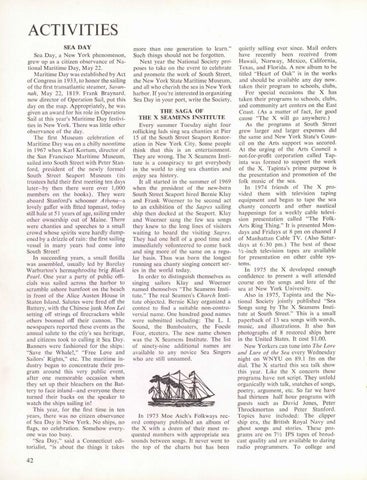 ACTIVITIES SEA DAY Sea Day, a New York phenomenon, grew up as a citizen observance of National Maritime Day, May 22. Maritime Day was established by Act of Congress in 1933, to honor the sailing of the first transatlantic steamer, Savannah, May 22, 1819. Frank Braynard, now director of Operation Sail, put this day on the map. Appropriately, he was given an award for his role in Operation Sail at this year&#39;s Maritime Day festivities in New York. There was little other observance of the day. The first Museum celebration of Maritime Day was on a chilly noontime in 1967 when Karl Kortum, director of the San Francisco Maritime Museum, sailed into South Street with Peter Stanford, president of the newly formed South Street Seaport Museum (its trustees held their first meeting ten days later-by then there were over 1,000 members on the books). They were aboard Stanford&#39;s schooner Athena-a lovely gaffer with fitted topmast, today still hale at 51 years of age, sailing under other ownership out of Maine. There were chanties and speeches to a small crowd whose spirits were hardly dampened by a drizzle of rain: the first sailing vessel in many years had come into South Street! In succeeding years, a small flotilla was assembled, usually led by Barclay Warburton&#39;s hermaphrodite brig Black Pearl. One year a party of public officials was sailed across the harbor to scramble ashore barefoot on the beach in front of the Alice Austen House in Staten Island. Salutes were fired off the Battery, with the Chinese junk Mon Lei setting off strings of firecrackers while others boomed off their cannon. The newspapers reported these events as the annual salute to the ctiy&#39;s sea heritage, and citizens took to calling it Sea Day. Banners were fashioned for the ships: &quot;Save the Whale!,&quot; &quot;Free Love and Sailors&#39; Rights,&quot; etc. The maritime industry began to concentrate their program around this very public event, after one memorable occasion when they set up their bleachers on the Battery to face inland-and everyone there turned their backs on the speaker to watch the ships sailing in! This year, for the first time in ten years, there was no citizen observance of Sea Day in New York. No ships, no flags, no celebration. Somehow everyone was too busy. &quot;Sea Day,&quot; said a Connecticut editorialist, &quot;is about the things it takes

more than one generation to learn.&quot; Such things should not be forgotten. Next year the National Society pro: poses to take on the event to celebrate and promote the work of South Street, the New York State Maritime Museum, and all who cherish the sea in New York harbor. If you&#39;re interested in organizing Sea Day in your port, write the Society_

THE SAGA OF THE X SEAMENS INSTITUTE Every summer Tuesday night four rollicking lads sing sea chanties at Pier 15 of the South Street Seaport Restoration in New York City. Some people think that this is an entertainment. They are wrong. The X Seamens Institute is a conspiracy to get everybody in the world to sing sea chanties and enjoy sea history. It all started in the summer of 1969 when the president of the new-born South Street Seaport hired Bernie Klay and Frank Woerner to be second act to an exhibition of the Sagres sailing ship then docked at the Seaport. Klay and Woerner sang the few sea songs they knew to the long lines of visitors waiting to board the visiting Sagres. They had one hell of a good time and immediately volunteered to come back and sing more of the same on a regular basis. Thus was born the longest running sea chanty singing concert series in the world today. In order to distinguish themselves as singing sailors Klay and Woerner named themselves &quot;The Seamens Institute.&quot; The real Seamen&#39;s Church Institute objected. Bernie Klay organized a contest to find a suitable non-controversial name. One hundred good names were submitted including: The L. I. Sound, the Bumboaters, the Focsle Four, etcetera. The new name chosen was the X Seamens Institute. The list of ninety-nine additional names are available to any novice Sea Singers who are still unnamed.

In 1973 Moe Asch&#39;s Folkways record company published an album of the X with a dozen of their most requested numbers with appropriate sea sounds between songs. It never went to the top of the charts but has been

quietly selling ever since. Mail orders have recently been received from Hawaii, Norway, Mexico, California, Texas, and Florida. A new album to be titled &quot;Heart of Oak&quot; is in the works and should be available any day now. taken their program to schools, clubs, For special occasions the X has taken their programs to schools, clubs, and community art centers on the East Coast. (As a matter of fact, for good cause &quot;The X will go anywhere.) As the programs at South Street grew larger and larger expenses did the same and New York State&#39;s Council on the Arts support was secured. At the urging of the Arts Council a not-for-profit corporation called Tapinta was formed to support the work of the X. Tapinta&#39;s prime purpose is the presentation and promotion of the folk music of the sea. In 1974 friends of The X provided them with television taping equipment and began to tape the sea chanty concerts and other nautical happenings for a weekly cable television presentation called &quot;The FolkArts Ring Thing.&quot; It is presented Mondays and Fridays at 8 pm on channel J of Manhattan Cable TV. (Also Saturdays at 6: 30 pm.) The best of these l/2 -inch television tapes are available for presentation on other cable systems. In 1975 the X developed enough confidence to present a well attended course on the songs and lore of the sea at New York University. Also in 1975, Tapinta and the National Society jointly published &quot;Sea Songs sung by The X Seamens Institute at South Street.&quot; This is a small paperback of 13 sea songs with words, music, and illustrations. It also has photographs of 8 restored ships here in the United States. It cost $1.00. New Yorkers can tune into The Lore and Lure of the Sea every Wednesday night on WNYU on 89.1 fm on the dial. The X started this sea talk show this year. Like the X concerts these programs have not script. They unfold organically with talk, snatches of songs, poetry, argument, etc. So far we have had thirteen half hour programs with guests such as David Jones, Peter Throckmorton and Peter Stanford. Topics have included: The clipper ship era, the British Royal Navy and ghost songs and stories. These programs are on 71/z IPS tapes of broadcast quality and are available to daring radio programmers. To college and