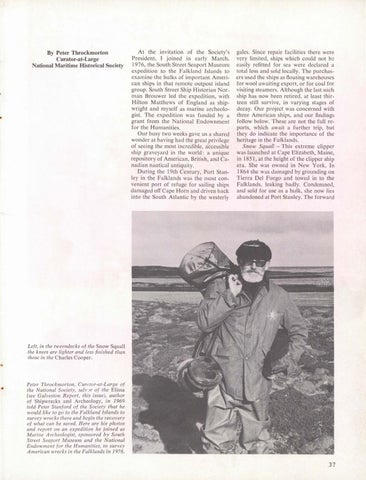 At the invitation of the Society's President, I joined in early March , 1976, the South Street Seaport Museum expedition to the Falkland Islands to examine the hulks of important American ships in that remote outpost island group. South Street Ship Historian Nor man Brouwer led the expedition, with Hilton Matthews of England as shipwright and myself as marine archeologist. The expedition was funded by a grant from the National Endownment for the Humanities. Our busy two weeks gave us a shared wonder at having had the great privilege of seeing the most incredible, accessible ship graveyard in the world: a unique repository of American, British, and Canadian nautical antiquity. During the 19th Century, Port Stanley in the Falklands was the most convenient port of refuge for sailing ships damaged off Cape Horn and driven back into the South Atlantic by the westerly

gales. Since repair facilities there were very limited, ships which could not be easily refitted for sea were declared a total loss and sold locally. The purchasers used the ships as floating warehouses for wool awaiting export, or for coal for visiting steamers. Although the last such ship has now been retired, at least thirteen still survive, in varying stages of decay. Our project was concerned with three American ships, and our findings follow below. These are not the full reports, which await a further trip, but they do indicate the importance of the heritage in the Falklands. Snow Squall - This extreme clipper was launched at Cape Elizabeth, Maine, in 1851, at the height of the clipper ship era. She was owned in New York. In 1864 she was damaged by grounding on Tierra Del Fuego and towed in to the Falklands, leaking badly. Condemned, and sold for use as a hulk, she now lies abandoned at Port Stanley. The forward

Left, in the tweendecks of the Snow Squall the knees are lighter and less finis/zed than those in the Charles Cooper.

Peter Throckmorton, Curntor-at-Large of the National Society, salv Jr of the Elissa (see Galveston Report, this issue), author of Shipwrecks and Archeology, in 1969 told Peter Stanford of the Society that he would like to go to the Falkland Islands to survey wrecks th ere and begin the recovery of what can be saved. Here are his photos and report on an expedition he joined as Marine A rcheologist, sponsored by South Street Seaport Museum and the National Endowment for the Humanities, to survey American wrecks in the Falklands in 1976.