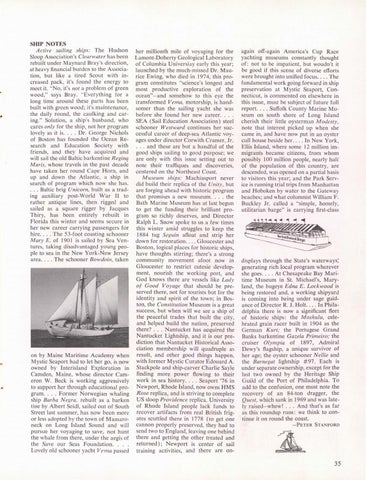 SHIP NOTES Active sailing ships: The Hudson Sloop Association&#39;s Clearwater has been rebuilt under Maynard Bray&#39;s direction, at heavy financial burden to the Association, but like a tired Scout with increased pack, it&#39;s found the energy to meet it. &quot;No, it&#39;s not a problem of green wood,&quot; says Bray. &quot; Everything for a long time around these parts has been built with green wood; it&#39;s maintenance, the daily round, the caulking and caring.&quot; Solution, a ship&#39;s husband, who cares only for the ship, not her program lovely as it is .... Dr. George Nichols of Boston has founded the Ocean Research and Education Society with friends, and they have acquired and will sail the old Baltic barkentine Reginq Maris, whose travels in the past decade have taken her round Cape Horn, and up and down the Atlantic, a ship in search of program which now she has. ... Baltic brig Unicorn, built as a trading auxiliary post-World War II to rather antique lines, then rigged and sailed as a square rigger by Jacques Thiry, has been entirely rebuilt in Florida this winter and seems secure in her new career carrying passengers for hire .... The 53-foot coasting schooner Mary E. of 1901 is sailed by Sea Ventures, taking disadvantaged young people to sea in the New York-New Jersey area .... The schooner Bowdoin, taken

her millionth mile of voyaging for the Lamont-Doherty Geological Laboratory of Columbia Universiay early this year; launched by the much-missed Dr. Maurice Ewing, who died in 1974, this program constitutes &quot;science&#39;s longest and most productive exploration of the ocean&quot;-and somehow to this eye the transformed Vema, motorship, is handsomer than the sailing yacht she was before she found her new career. ... SEA (Sail Education Association) steel schooner Westward continues her successful career of deep-sea Atlantic voyages under director Corwith Cramer, Jr. ... and these are but a handful of the good ships sailing to good purpose; we are only with this issue setting out to note their traffiques and discoveries, centered on the Northeast Coast. Museum ships: Machiasport never did build their replica of the Unity, but are forging ahead with historic program that promises a new museum .... the Bath Marine Museum has at last begun to get the funding their brilliant program so richly deserves, and Director Ralph L. Snow spoke to us a few times this winter amid struggles to keep the 1884 tug Seguin afloat and strip her down for restoration .... Gloucester and Boston, logical places for historic ships, have thoughts stirring; there&#39;s a strong community movement afoot now in Gloucester to restrict cutesie development, nourish the working port, and God knows there are vessels like Lady of Good Voyage that should be preserved there, not for tourists but for the identity and spirit of the town; in Boston, the Constitution Museum is a great success, but when will we see a ship of the peaceful trades that built the city, and helped build the nation, preserved there? ... Nantucket has acquired the Nantucket Lightship, and it is our prediction that Nantucket Historical Association membership will quadruple as on by Maine Maritime Academy when result, and other good things happen, Mystic Seaport had to let her go, is now with former Mystic Curator Edouard A. owned by Interisland Exploration in Stackpole and ship-carver Charlie Sayle Camden, Maine, whose director Cam- finding more power flowing to their eron W. Beck is working aggressively work in sea history .... Seaport &#39;76 in to support her through educational pro- Newport, Rhode Island, now owns HMS gram .... Former Norwegian whaling Rose replica, and is striving to complete ship Barba Negra, rebuilt as a barken US sloop Providence replica. University tine by Albert Seidl, sailed out of South of Rhode Island people lack funds to Street last summer, has now been more recover artifacts from real British frigor less adopted by the town of Mamaro- ates scuttled there in 1778 (to get one neck on Long Island Sound and will cannon properly preserved, they had to pursue her voyaging to save, not hunt send two to England, leaving one behind the whale from there, under the aegis of there and getting the other treated and the Save our Seas Foundation. . . . returned); Newport is center of sail Lovely old schooner yacht Verna passed training activities, and there are on-

again off-again America&#39;s Cup Race yachting museums constantly thought of: not to be impatient, but woudn&#39;t it be good if this scene of diverse efforts were brought into unified focus .... The fundamental work going forward in ship preservation at Mystic Seaport, Connecticut, is commented on elsewhere in this issue, must be subject of future full report. ... Suffolk County Marine Museum on south shore of Long Island cherish their little oysterman Modesty, note that interest picked up when she came in, and have now put in an oyster cu.JI house beside her. ... In New York, Ellis Island, where some 12 million immigrants became citizens, from whom possibly 100 million people, nearly half of the population of this country, are descended, was opened on a partial basis to visitors this year; and the Park Service is running trial trips from Manhattan and Hoboken by water to the Gateway beaches; and what columnist William F. Buckley Jr. called a &quot;simple, homely, utilitarian barge&quot; is carrying first-class

displays through the State&#39;s waterways; generating rich local program wherever she goes .... At Chesapeake Bay Maritime Museum in St. Michael&#39;s, Maryland, the bugeye Edna E. Lockwood is being restored and, a working shipyard is coming into being under sage guidance of Director R. J. Holt. ... In Philadelphia there is now a significant fleet of historic ships: the Moshulu, celebrated grain racer built in 1904 as the German Kurt; the Portugese Grand Banks barkentine Gazela Primeiro; the cruiser Olympia of 1897, Admiral Dewy&#39;s flagship, a unique survivor of her age; the oyster schooner Nellie and the Barnegat lightship #97. Each is under separate ownership, except for the last two owned by the Heritage Ship Guild of the Port of Philadelphia. To add to the confusion, one must note the recovery of an 84-ton dragger, the Quest, which sank in 1969 and was lately raised-whew! ... And that&#39;s as far as this roundup runs: we think to continue it on round the coast. -PETER STANFORD