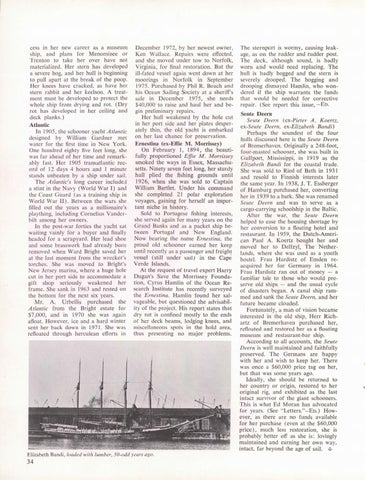 cess in her new career as a museum ship, and plans for Menominee or Trenton to take her over have not materialized. Her stern has developed a severe hog, and her hull is beginning to pull apart at the break of the poop. Her knees have cracked, as have her stern rabbit and her keelson. A treatment must be developed to protect the whole ship from drying and rot. (Dry rot has developed in her ceiling and deck planks.) Atlantic In 1905, the schooner yacht Atlantic designed by William Gardner met water for the first time in New York. One hundred eighty five feet long, she was far ahead of her time and remarkably fast. Her 1905 transatlantic record of 12 days 4 hours and 1 minute stands unbeaten by a ship under sail. The Atlantic&#39;s long career included a stint in the Navy (World War I) and the Coast Guard (as a training ship in World War II). Between the wars she filled out the years as a millionaire&#39;s plaything, including Cornelius Vanderbilt among her owners. In the post-war forties the yacht sat waiting vainly for a buyer and finally headed for a scrapyard. Her lead shoe and some brasswork had already been removed when Ward Bright saved her at the last moment from the wrecker&#39;s torches. She was moved to Bright&#39;s New Jersey marina, where a huge hole cut in her port side to accommodate a gift shop seriously weakened her frame. She sank in 1963 and rested on the bottom for the next six years. Mr. A. Urbellis purchased the Atlantic from the Bright estate for $7,000, and in 1970 she was again afloat. However, ice and a hard winter sent her back down in 1971. She was refloated through herculean efforts in

December 1972, by her newest owner, Ken Wallace. Repairs were effected, and she moved under tow to Norfolk, Virginia, for final restoration. But the ill-fated vessel again went down at her moorings in Norfolk in September 1975. Purchased by Phil R. Beach and his Ocean Sailing Society at a sheriff&#39;s sale in December 1975, she needs $40,000 to raise and haul her and begin preliminary repairs. Her hull weakened by the hole cut in her port side and her plates desperately thin, the old yacht is embarked on her last chance for preservation. Ernestina (ex-Effie M. Morrissey) On February 1, 1894, the beautifully proportioned Effie M. Morrissey smoked the ways in Essex, Massachusetts. Ninety seven feet long, her sturdy hull plied the fishing grounds until 1926, when she was sold to Captain William Bartlet. Under his command she completed 21 polar exploration voyages, gaining for herself an important niche in history. Sold to Portugese fishing interests, she served again for many years on the Grand Banks and as a packet ship between Portugal and New England. Now bearing the name Ernestina, the proud old schooner earned her keep until recently as a passenger and freight vessel (still under sail) in the Cape Verde Islands. At the request of travel expert Harry Dugan&#39;s Save the Morrissey Foundation, Cyrus Hamlin of the Ocean Research Institute has recently surveyed the Ernestina. Hamlin found her salvageable, but questioned the advisability of the project. His report states that dry rot is confined mostly to the ends of her deck beams, lodging knees, and miscellaneous spots in the hold area, thus presenting no major problems.

The sternport is wormy, causing leakage, as on the rudder and rudder post. The deck, although sound, is badly worn and would need replacing. The hull is badly hogged and the stern is severely drooped. The hogging and drooping dismayed Hamlin, who wondered if the ship warrants the funds that would be needed for corrective repair. (See report this issue, -Eo. Seute Deem Seute Deem (ex-Pieter A. Koertz, ex-Seute Deem, ex-Elizabeth Bandi) Perhaps the soundest of the four hulls discussed here is the Seute Deern of Bremerhaven. Originally a 248-foot, four-masted schooner, she was built in Gulfport, Mississippi, in 1919 as the Elizabeth Bandi for the coastal trade. She was sold to Ried of Bath in 1931 and resold to Finnish interests later the same year. In 1938, J. T. Essberger of Hamburg purchased her, converting her in 1939 to a bark. She was renamed Seute Deem and was to serve as a cargo-carrying schoolship in the Baltic. After the war, the Seute Deern helped to ease the housing shortage by her conversion to a floating hotel and restaurant. In 1959, the Dutch-American Paul A. Koertz bought her and moved her to Delfzyl, The Netherlands, where she was used as a youth hostel. Frau Hardistz of Emden reacquired her for Germany in 1964. Frau Hardistz ran out of money - a familiar tale to those who would preserve old ships - and the usual cycle of disasters began. A canal ship rammed and sank the Seute Deem, and her future became clouded. Fortunately, a man of vision became interested in the old ship, Herr Richartz of Bremerhaven purchased her, refloated and restored her as a floating museum and restaurant-bar ship. According to all accounts, the Seute Deem is well maintained and faithfully preserved. The Germans are happy with her and wish to keep her. There was once a $60,000 price tag on her, but that was some years ago. Ideally, she should be returned to her country or origin, restored to her original rig, and exhibited as the last intact survivor of the giant schooners. This is what Ed Moran has advocated for years. (See &quot;Letters.&quot;-Eo.) However, as there are no funds available for her purchase (even at the $60,000 price), much less restoration, she is probably better off as she is: lovingly maintained and earning her own way, intact, far beyond the age of sail. .V