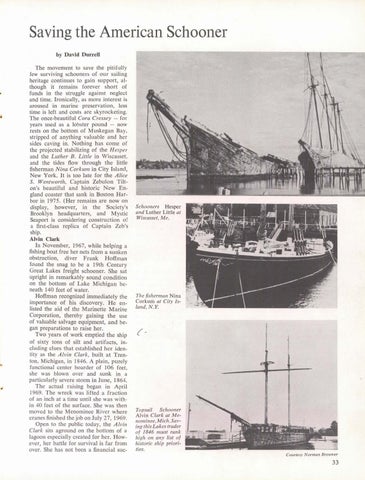 The movement to save the pitifully few surviving schooners of our sailing heritage continues to gain support, although it remains forever short of funds in the struggle against neglect and time. Ironically, as more interest is aroused in marine preservation, less time is left and costs are skyrocketing. The once-beautiful Cora Cressey - for years used as a lobster pound - now rests on the bottom of Muskegan Bay, stripped of anything valuable and her sides caving in. Nothing has come of the projected stabilizing of the Hesper and the Luther B. Little in Wiscasset, and the tides flow through the little fisherman Nina Corkum in City Island, New York. It is too late for the Alice S. Wentworth, Captain Zebulon Tilton's beautiful and historic New England coaster that sank in Boston Harbor in 1975. (Her remains are now on display, however, in the Society's Brooklyn headquarters, and Mystic Seaport is considering construction of a first-class replica of Captain Zeb's ship. Alvin Clark In November, 1967, while helping a fishing boat free her nets from a sunken obstruction, diver Frank Hoffman found the snag to be a 19th Century Great Lakes freight schooner. She sat upright in remarkably sound condition on the bottom of Lake Michigan beneath 140 feet of water. Hoffman recognized immediately the importance of his discovery. He enlisted the aid of the Marinette Marine Corporation, thereby gaining the use of valuable salvage equipment, and began preparations to raise her. Two years of work emptied the ship of sixty tons of silt and artifacts, including clues that established her identity as the Alvin Clark, built at Trenton, Michigan, in 1846. A plain, purely functional center boarder of 106 feet, she was blown over and sunk in a particularly severe storm in June, 1864. The actual raising began in April 1969. The wreck was lifted a fraction of an inch at a time until she was within 40 feet of the surface. She was then moved to the Menominee River where cranes finished the job on July 27, 1969. Open to the public today, the Alvin Clark sits aground on the bottom of a lagoon especially created for her. However, her battle for survival is far from over. She has not been a financial sue-

Schooners Hesper and Luther Little at Wiscasset, Me.