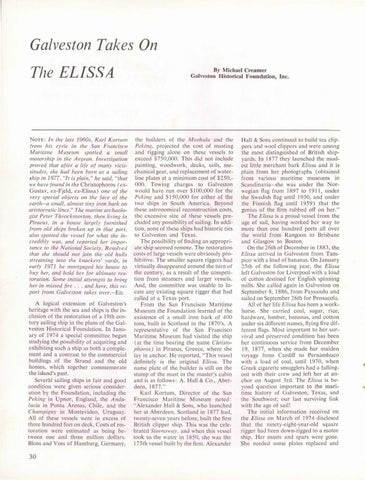 Galveston Takes On The ELISL()A

In th e late 1960s, Karl Kortum from his eyrie in the San Francisco Maritime Museum spotted a small motorship in the Aegean. Investigation proved that after a life of many vicissitudes, she had been born as a sailing ohip in 1877. &quot;It is plain,&quot; he said, &quot;that we have found in the Christophoros (exGustav, ex-Fjeld, ex-Elissa) one of the very special objects on th e face of the earth-a small, almost tiny iron bark on aristocratic lines.&quot; The marine archeologist Peter Throckmorton , then living in Piraeus, in a house largely furnished from old ships broken up in that port , also spotted the vessel for what she incredibly was, and reported her importance to the National Society . R esolved that she should not join the old hulls streaming into the knackers&#39; yards, in early 1971 he mortgaged his house to buy her, and hold her for ultimate restoration . Some initial attempts to bring her in missed fire . . . and here, this report from Galveston takes over.-Eo. NOTE:

A logical extension of Galveston&#39;s heritage with the sea and ships is the inclusion of the restoration of a 19th century sailing ship in the plans of the Galveston Historical Foundation. In January of 1974 a special committee began studying the possibility of acquiring and exhibiting such a ship as both a complement and a contrast to the commercial buildings of the Strand and the old homes, which together commemorate the is~and &#39;s past. Severll.l sailing ships in fair and good condition were given serious consideration by the Foundation, including the Peking in Upnor, England, the Andalucia in Punta Arenas, Chile, and the Champigny in Montevideo, Uruguay. All of these vessels were in excess of three hundred feet on deck. Costs of restoration were estimated as being between one and three million dollars. Blom and Voss of Hamburg, Germany,

the builders of the Moshulu and the Peking, projected the cost of masting and rigging alone on these vessels to exceed $750,000. This did not include painting, woodwork, decks, sails, mechanical gear, and replacement of waterline plates at a minimum cost of $250,000. Towing charges to Galveston would have run over $100,000 for the Peking and $150,000 for either of the two ships in South America. Beyond these astronomical reconstruction costs, the excessive size of these vessels precluded any possibility of sailing. In addition, none of these ships had historic ties to Galveston and Texas. The possibility of finding an appropriate ship seemed remote. The restoration costs of large vessels were obviously prohibitive. The smaller square riggers had virtually disappeared around the turn of the century, as a result of the competition from steamers and larger vessels. And, the committee was unable to locate any existing square rigger that had called at a Texas port. From the San Francisco Maritime Museum the Foundation learned of the existence of a small iron bark of 400 tons, built in Scotland in the l 870&#39;s. A representative of the San Francisco Maritime Museum had visited the ship (at the time bearing the name Christophoros) in Piraeus, Greece, where she lay in anchor. He reported, &quot;This vessel definitely is the original Elissa. The name plate of the builder is still on the stump of the mast in the master,&#39;s cabin and is as follows: A. Hall &amp; Co., Aberdeen, 1877.&quot; Karl Kortum, Director of the San Francisco Maritime Museum noted: &quot;Alexander Hall &amp; Sons, who launched her at Aberdeen, Scotland in 1877 had , twenty-seven years before, built the first British clipper ship. This was the celebrated Stornoway, and when this vessel took to the water in 1850, she was the I 75th vessel built by the firm . Alexander

Hall &amp; Sons continued to build tea clippers and wool clippers and were among the most distinguished of British shipyards. In 1877 they launched the modest little merchant bark Elissa and it is plain from her photographs (obtained from various maritime museums in Scandinavia-she was under the Norwegian flag from 1897 to 1911, under the Swedish flag until 1930, and under the Finnish flag until 1959) that the genius of the firm rubbed off on her.&quot; The Elissa is a proud vessel from the age of sail, having worked her way to more than one hundred ports all over the world from Rangoon to Brisbane and Glasgow to Boston. On the 26th of December in 1883, the Elissa arrived in Galveston from Tampico with a load of bananas. On January 25th of the following year, the Elissa left Galveston for Liverpool with a load of cotton destined for English spinning mills. She called again in Galveston on September 8, 1886, from Paysandu and sailed on September 26th for Pensacola. All of her life Elissa has been a workhorse. She carried coal, sugar, Âˇrice, hardware, lumber, bananas, and cotton under six different names, flying five different flags . Most important to her survival and preserved condition has been her continuous service from December 19, 1877, when she made her maiden voyage from Cardiff to Pernambuco with a load of coal, until 1970, when Greek cigarette smugglers had a fallingout with their crew and left her at anchor on August 3rd. The Elissa is beyond question important to the maritime history of Galveston, Texas, and the Southwest; our last surviving link with the age of sail! The initial information received on the Elissa on March of 1974 disclosed that the ninety-eight-year-old square rigger had been down-rigged to a motor ship. Her masts and spars were gone. She needed some plates replaced and