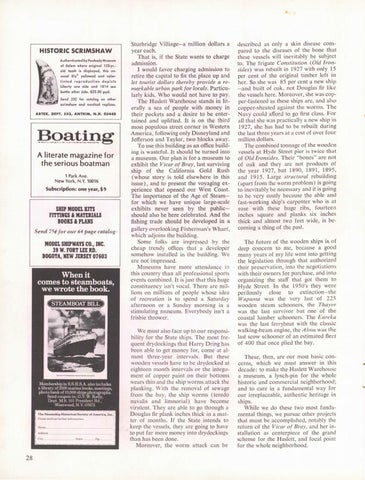 of Solem where original 125-yr.old tooth is displayed, this unusua l 6%&quot; ye ll owed and colorti nted reproduction depicts Liberty one side and 1814 sea battle other side, $22.~0 ppd. Send 25¢ for catalog on other

Sturbridge Villiage-a million dollars a year each. That is, if the State wants to charge admission. I would favor charging admission to retire the capital to fix the place up and let tourist dollars thereby provide a remarkable urban park for locals. Particularly kids. Who would not have to pay. The Haslett Warehouse stands in literally a sea of people with money in their pockets and a desire to be entertained and uplifted. It is on the third most populous street corner in Western America, following only Disneyland and Jefferson and Taylor, two blocks away. To use this building as an office building is wasteful. It should be turned into a museum. Our plan is for a museum to exhibit the Vicar of Bray, last surviving ship of the California Gold Rush (whose story is told elsewhere in this issue), and to present the voyaging experience that opened our West Coast. The importance of the Age of Steamfor which we have unique large-scale exhibits never seen by the publicshould also be here celebrated. And the fishing trade should be developed in a gallery overlooking Fisherman&#39;s Wharf, which adjoins the building. Some folks are impressed by the cheap trendy offices that a developer somehow installed in the building. We are not impressed. Museums have more attendance in this country than all professional sports events combined. It is just that this huge constituency isn&#39;t vocal. There are millions on millions of people whose idea of recreation is to spend a Saturday afternoon or a Sunday morning in a stimulating museum. Everybody isn&#39;t a frisbie thrower. We must also face up to our responsibility for the State ships. The most frequent drydockings that Harry Dring has been able to get money for, come at almost three-year intervals. But these wooden vessels have to be drydocked at eighteen month intervals or the integument of copper paint on their bottoms wears thin and the ship worms attack the planking. With the removal of sewage from the bay, the ship worms (teredo navalis and limnorial) have become virulent. They are able to go through a Douglas fir plank inches thick in a matter of months. If the State intends to keep the vessels, they are going to have to put far more money into drydockings than has been done. Moreover, the worm attack can be

described as only a skin disease compared to the diseases of the bone that these vessels will inevitably be subject to. The frigate Constitution (Old Ironsides) was rebuilt in 1927 with only 15 per cent of the original timber left in her. So she was 85 per cent a new ship -and built of oak , not Douglas fir like the vessels here. Moreover, she was copper-fastened as these ships are, and also copper-sheated against the worms. The Navy could afford to go first class. For all that she was practically a new ship in 1927, she has had to be rebuilt during the last three years at a cost of over four million dollars. The combined tonnage of the wooden vessels at Hyde Street pier is twice that of Old Ironsides. Their &quot;bones&quot; are not of oak and they are not products of the year 1927, but 1890, 1891, 1895, and 1915. Large structural rebuilding (apart from the worm problem) is going to inevitably be necessary and it is going to be very costly because the able and fast-working ship&#39;s carpenter who is at ease with these huge ribs, fourteen inches square and planks six inches thick and almost two feet wide, is becoming a thing of the past. The future of the wooden ships is of deep concern to me, because a good many years of my life went into getting the legislation through that authorized their preservation, into the negotiations with their owners for purchase, and into organizing the staff that got them to Hyde Street. In the 1950&#39;s they were perilously close to extinction-the Wapama was the very last of 225 wooden steam schooners, the Thayer was the last survivor but one of the coastal lumber schooners. The Eureka was the last ferryboat with the classic walking-beam engine, the Alma was the last scow schooner of an estimated fle et of 400 that once plied the bay. These, then , are our most basic concerns, which we must answer in this decade: to make the Haslett Warehouse a museum, a lynch-pin for the whole historic and commercial neighborhood ; and to care in a fundamental way for our irreplaceable, authentic heritage in ships. While we do these two most fundamental things, we pursue other projects that must be accomplished, notably the return of the Vicar of Bray, and her installation as centerpiece of the grand scheme for the Haslett, and focal point for the whole neighborhood.