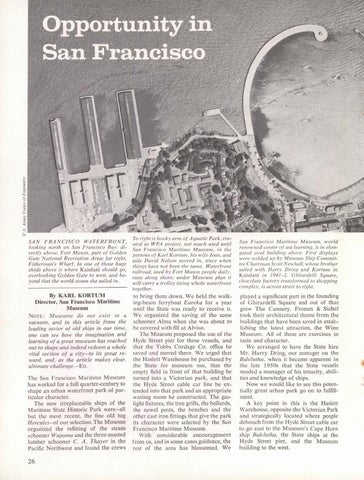 SAN FRANCISCO WATERFRONT, looking north on San Francisco Bay: directly above, Fort Mason , part of Golden Gate National R ecreation Area; far right, Fish erman&#39;s Wharf. In one of those huge sheds abo ve is where Kaiulani should go, overlooking Golden Gate to west, and beyond that the world ocean she sailed in.

By KARL KORTUM Director, San Francisco Maritime Museum NOTE: Museums do not exist in a vacuum, and in this article from the leading savior of old ships in our time, one can see how the imagination and learning of a great museum has reached out to shape and indeed redeem a whole vital section of a city-to its great reward, and, as the article makes clear, ultimate challenge.-Eo.

The San Francisco Maritime Museum has worked for a full quarter-century to shape an urban waterfront park of particular character. The now irreplaceable ships of the Maritime State Historic Park were-all but the most recent, the fine old tug Hercules-of our selection. The Museum organized the refitting of the steam schooner Wapama and the three-masted lumber schooner C. A. Thayer in the Pacific Northwest and found the crews

To right is hooky arm of A qua tic Park, created as WPA project, not much used until San Francisco Maritime Museum , in the persons of Karl Kortum , his wife Jean, and aide David Nelson moved in, since when things have not been the same. Wat erfront railroad, used by Fort Mason people dail y, runs along shore; under Museum plan it will carry a trolley tieing whole waterfront together.

to bring them down. We held the walking-beam ferryboat Eureka for a year until the State was ready to receive it. We organized the saving of the scow schooner Alma when she was about to be covered with fill at Alviso. The Museum proposed the use of the Hyde Street pier for these vessels, and that the Tubbs Cordage Co. office be saved and moved there. We urged that the Haslett Warehouse be purchased by the State for museum use, that the empty field in front of that building be turned into a Victorian park, and that the Hyde Street cable car line be extended into that park and an appropriate waiting room be constructed. The gaslight fixtures, the tree grills, the bollards, the newel posts, the benches and the other cast iron fittings that give the park its character were selected by the San Francisco Maritime Museum. With considerable encouragement from us, and in some cases guidance, the rest of the area has blossomed. We

played a significant part in the founding of Ghirardelli Square and out of that grew The Cannery. Fromm &amp; Sichel took their architectural theme from the buildings that have been saved in establishing the latest attraction, the Wine Museum. All of these are exercises in taste and character. We arranged to have the State hire Mr. Harry Dring, our manager on the Balclutha, when it became apparent in the late 1950s that the State vessels needed a manager of his tenacity, abilities and knowledge of ships. Now we would like to see this potentially great urban park go on to fulfillment. A key point in this is the Haslett Warehouse, opposite the Victorian Park and strategically located where people debouch from the Hyde Street cable car to go east to the Museum&#39;s Cape Horn ship Balc/utha, the State ships at the Hyde Street pier, and the Museum building to the west.