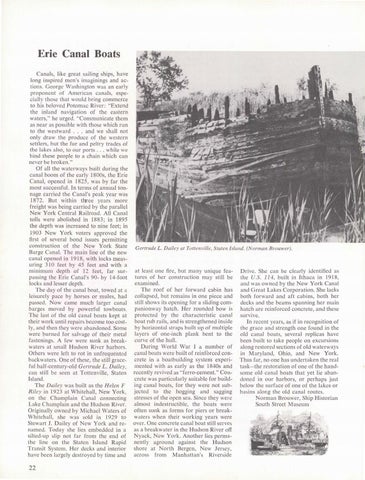 Erie Canal Boats Canals, like great sailing ships, have long inspired men&#39;s imaginings and actions. George Washington was an early proponent of American canals, especially those that would bring commerce to his beloved Potomac River: &quot;Extend the inland navigation of the eastern waters,&quot; he urged. &quot;Communicate them as near as possible with those which run to the westward ... and we shall not only draw the produce of the western settlers, but the fur and peltry trades of the lakes also, to our ports ... while we bind these people to a chain which can never be broken.&quot; Of all the waterways built during the canal boom of the early 1800s, the Erie Canal, opened in 1825, was by far the most successful. In terms of annual tonnage carried the Canal&#39;s peak year was 1872. But within three years more freight was being carried by the parallel New York Central Railroad. All Canal tolls were abolished in 1883; in 1895 the depth was increased to nine feet; in 1903 New York voters approved the first of several bond issues permitting construction of the New York State Barge Canal. The main line of the new canal opened in 1918, with locks measuring 310 feet by 45 feet and with a minimum depth of 12 feet, far surpassing the Erie Canal&#39;s 90- by 14-foot locks and lesser depth. The day of the canal boat, towed at a leisurely pace by horses or mules, had passed. Now came much larger canal barges moved by powerful towboats. The last of the old canal boats kept at their work until repairs become too costly, and then they were abandoned. Some were burned for salvage of their metal fastenings. A few were sunk as breakwaters at small Hudson River harbors. Others were left to rot in unfrequented backwaters. One of these, the still graceful half-century-old Gertrude L. Dailey, can still be seen at Tottenville, Staten Island. The Dailey was built as the Helen F Riley in 1923 at Whitehall, New York, on the Champlain Canal connecting Lake Champlain and the Hudson River. Originally owned by Michael Waters of Whitehall, she was sold in 1929 to Stewart J. Dailey of New York and renamed. Today she lies embedded in a silted-up slip not far from the end of the line on the Staten Island Rapid Transit System. Her decks and interior have been largely destroyed by time and

at least one fire, but many unique features of her construction may still be examined. The roof of her forward cabin has collapsed, but remains in one piece and still shows its opening for a sliding companionway hatch. Her rounded bow is protected by the characteristic canal boat rub rails, and is strengthened inside by horizontal straps built up of multiple layers of one-inch plank bent to the curve of the hull. During World War I a number of canal boats were built of reinforced concrete in a boatbuilding system experimented with as early as the 1840s and recently revived as &quot;ferro-cement.&quot; Concrete was particularly suitable for building canal boats, for they were not subjected to the hogging and sagging stresses of the open sea. Since they were almost indestructible, the boats were often sunk as forms for piers or breakwaters when their working years were over. One concrete canal boat still serves as a breakwater in the Hudson River off Nyack, New York. Another lies permanently aground against the Hudson shore at North Bergen, New Jersey, across from Manhattan&#39;s Riverside

Drive. She can be clearly identified as the U.S. 114, built in Ithaca in 1918, and was owned by the New York Canal and Great Lakes Corporation. She lacks both forward and aft cabins, both her decks and the beams spanning her main hatch are reinforced concrete, and these survive. In recent years, as if in recognition of the grace and strength one found in the old canal boats, several replicas have been built to take people on excursions along restored sections of old waterways in Maryland, Ohio, and New York. Thus far, no one has undertaken the real task-the restoration of one of the handsome old canal boats that yet lie abandoned in our harbors, or perhaps just below the surface of one of the lakes or basins alor:g the old canal routes. Norman Brouwer, Ship Historian South Street Museum